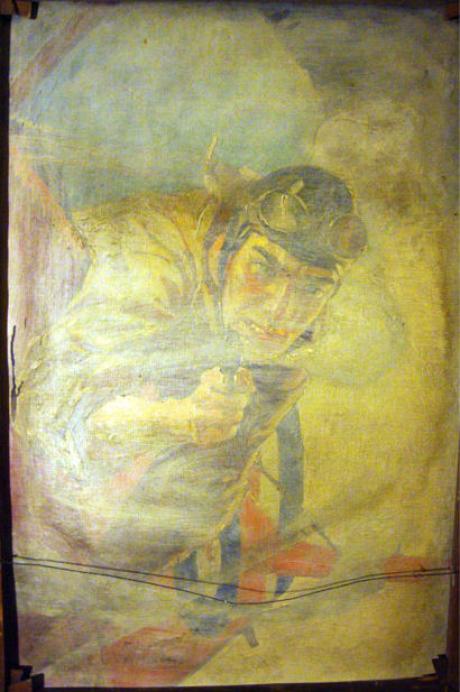 The painting is either a design for a poster or a cover of a pulp book. The painting shows an air ace firing his pistol from the cockpit of his aeroplane a common pratice in the early stages of WWI.

Dogfighting first emerged in World War I. Ever since "heavier than air" flight became a reality in 1903, people had been trying to figure out how to use this new technology for warfare. Aircraft were initially used as mobile observation vehicles, and early pilots gave little thought to aerial combat. Balloons had been used for this purpose since the American Civil War in 1861.The new airplanes proved their worth by spotting the hidden German advance on Paris in the second month of the war.

Enemy pilots at first simply exchanged waves, or shook their fists at each other. Due to weight restrictions, only small weapons could be carried on board. Intrepid pilots decided to interfere with enemy reconnaissance by improvised means, including throwing bricks, grenades and sometimes rope, which they hoped would entangle the enemy plane's propeller. The first dogfight is believed to have taken place on 28 August 1914, when Norman Spratt, flying an unarmed Sopwith Tabloid,forced down a German Albatros C.I two-seater. Pilots then began firing hand-held guns at enemy planes, such as pistols and carbines. In August 1914, Staff-Captain Pyotr Nesterov, from Russia, became the first pilot to ram his plane into an enemy spotter aircraft. In October 1914, an airplane was shot down by a hand gun from another plane for the first time over Rheims, France. Once machine guns were mounted to the plane, either on a flexible mounting or higher on the wings of early biplanes, the era of air combat began.

Sidney H. Riesenberg (1885 – 1971) was an illustrator and artist who lived in Yonkers, NY and commuted to his studio in NYC by train. He is known, as a professional illustrator, for his posters for the United States Marine Corps and the Liberty bond programs, for his illustrations for book covers, magazines, and for oil paintings of diverse subjects. He retired from his professional work and dedicated his full-time energy to painting fine arts and teaching. He began, in 1937, spending summers in Rockport, MA, where he painted scenes of the small fishing town. He was active in the Rockport Art Association, teaching oil painting and participating in water color figure painting classes.

Riesenberg was born in 1885 in Chicago. He was educated at the School of the Art Institute of Chicago, where he was recognized for his compositions in oil. He moved to Yonkers in 1905 where he began his career as a professional illustrator, after a sojourn in the American west pursuing what became a lifelong interest in depicting the frontier west as was being popularized then by Zane Grey and other writers.  In the early 1930s, he began doing illustration work for magazines. In the 1930s and 1940s, his work was often featured at venues such as theNational Academy of Design and in organizations such as the Allied Artists of America. Riesenberg was also the vice president of the Yonkers Art Association. Riensenberg died in 1971 in Cambridge, Massachusetts.

Riesenberg had a brother six years older, Felix, with whom he was extremely close. They shared a love of creating art and adventure. In their youth, both wrote short stories in journals they kept.

Of Riesenberg's work, his contributions during World War I are well known and he is described as "one of the greatest illustrators of the World War I era." Riensenberg's style, it has been said, shows influences from Impressionism. He produced many posters for the Marines in addition to posters advertising the Liberty Loan campaign during World War I. One of Riesenberg's most well known works is his 1918 World War I-era poster, Over the Top for You, which illustrates a young doughboy clutching the American flag. With its bold illustration and concise text, like many war posters of the time, Over the Top for You encouraged the public to support its military by purchasing liberty loans. Among other posters, it was selected to display in the Smithsonian American Art Museum under the exhibit, Over the Top: American Posters from World War I. Riesenberg also created several posters for the United States Navy, one of which, titled Democracy's Vanguard, illustrates Marines landing from a boat to initiate an offensive. Another illustrated uniformed soldiers raising the flag against the background of a warship.

Riesenberg created illustrations, including covers, for many publications such as Boys' Life Magazine, the official monthly magazine of the Boy Scouts of America, Harper's and The Saturday Evening Post. His many thematic subjects included scenes from places he lived, historical and action scenes, portraits, as well as depicting the Old West.