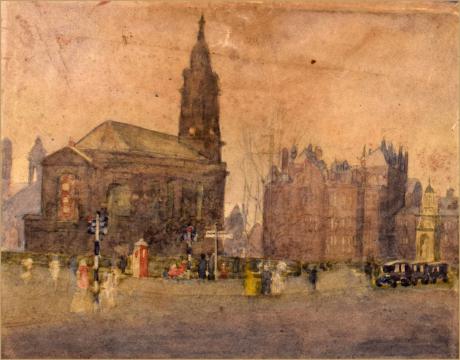 inscribed on the reverse " All Saints Church in Fog / Manchester "

All Saints Church was consecrated on April 12th, 1820. The building consisted of a chancel, nave, aisles and a domed tower. It was partially destroyed by fire in February of 1850 but was restored and reopened by Christmas of the same year. All Saints Church gave its name to an area of Manchester just south of the city centre. It is no longer with us because heavy damage during the Manchester Blitz led to its demolition some years later.Like some other Manchester churches, though, the churchyard remains in the form of a public park. In fact, the graveyard which surrounded the church had been converted into a children's playground as early as the 1930s. Today a fine park stands in Grosvenor Square with only a plaque to remind us that the church once stood here. Most people who have spent some time around the Manchester Met campus have seen the four markers at the park entrances, or have heard rumours to the effect that this was once a graveyard. However, it has been a great surprise for our team to discover the sheer mass of deceased humanity that still reside amongst picnicking students, hurried workers and (every summer) naked people on bicycles. During the Blitz of 1940, All Saints church was badly damaged by enemy bombardment and was later demolished. The church bell, that had hung in the church since 1820, was saved from the debris and shipped to Noranda, Canada, where it was hung in another church also called All Saints. By the 1980s, the children’s playground had been removed and the site was now just serving as a public garden. In the 1990s, Manchester Metropolitan University took over the lease of the grounds from Manchester City Council and installed the majority of the current landscaping. Over 16,000 remains, including that of Fanny Knowles, still remain buried under the garden.

With the help of Manchester Centre for Public History and Heritage and the Manchester Central Library Archives+ team we have discovered burial records for over 16,000 people. Crosschecking against Manchester City Council records shows that the remains have not been moved. So we know with some certainty that here, as with other sites in Manchester such as Angel Meadows and the recent excavation at Cross Street Chapel in the city centre, the dead of Manchester past are not very far away.

At the start of the Nineteenth-Century the population of Manchester stood at 76,788, by 1831 it had more than doubled to 187,022. This population increase was brought by industrialisation, which saw labourers leave their villages and flock to the towns to seek employment. Manchester transformed from a moderate sized market town into the industrial heart of Britain.

As the population rose dramatically, so did the number of people dying. By the middle of the century, the crude death rate for Manchester was 33 per thousand, which was above the national average at 22 per thousand. The town’s mortality rate exceeded that of London, but was less than its neighbour Liverpool.

To cope with the high mortality rates, several new places to inter the dead opened across the town; This included graveyards, burial grounds attached to churches and three large joint-stock cemeteries.

All Saints Burial Ground officially opened on Wednesday 19 April 1820. Its aim was to cater for the parishioners of All Saints – an area just off Oxford Road. The burial ground – which was attached to the new All Saints Church – was funded by the Rev. Charles Burton. The total cost of the church and burial ground was £16,000.

The first interment was that of twenty-one-year-old Fanny Knowles, who lived on London Road. Her funeral was conducted by the founder himself, Charles Burton. It would be another month before the next interment took place. In the first year burials were slow with only 55 interments, however, by 1851 the number had increased to over 600 per annum.

The number of interments had started to rise rapidly in the 1840s and by 1850s the burial ground, like many other places of burial in Manchester, had become a real concern to the local residents, who were worried that waste matter from the freshly buried corpses was seeping into the water supply and contaminating those living in the town. This was not just a Manchester problem. Industrial towns throughout England were running out of burial space and were having to inter corpses in overcrowded and unsanitary places of burial. This led to several government backed reports into a perceived ‘burial crisis’. The government’s solution was to introduce a series of Burial Acts throughout the 1850s. They resulted in the appointment of burial boards, which could use money from the rates to establish public cemeteries. The Burial Acts also permitted the closing down of local burial grounds and churchyards, and the promotion of municipal cemeteries as a preferred method to bury the dead. On 31 March 1856, All Saints Burial Ground was partly closed under direction of the new Burial Acts. No new graves were allowed to be dug and only interments in private graves and vaults that already been purchased were permitted. However, the part closure of All Saints did not satisfy the local residents, who complained to the Manchester Guardian that graves were remaining open for weeks, thus damaging the health of those that lived in the Oxford Road area. One resident called himself ‘one who objects to being poisoned’.

The 1850s was not a good decade for All Saints Church and its adjoining burial ground. In 1856 the burial ground was closed and six years prior to that the church burnt down. Such was the severity of the fire, seven fire engines were called and the damage was estimated at £6,000. This led to a drop in burials until the church was rebuilt.

By the end of the Nineteenth-Century, the burial ground was in a state of disrepair and neglect with sunken graves, broken headstones, flooding and debris from Oxford Road scattered across the ground. However, it was not until 1910 that a solution to the problem was offered to the Parks and Cemetery Committee at Manchester Council. The idea was to turn the burial ground into a public park by removing the headstones and grassing over the graves. As public space was limited in the area, it was felt that a beautiful public garden would be a better tribute to the departed. Such projects had already been a success in other cities such as Liverpool. However, it would take another 25 years for this idea to be put into practice. Finally, on 27 May 1935, the All Saints playground officially opened. It was described as one of the ‘brightest places in Manchester, with 30,000 children enjoying the park in the first six weeks’.