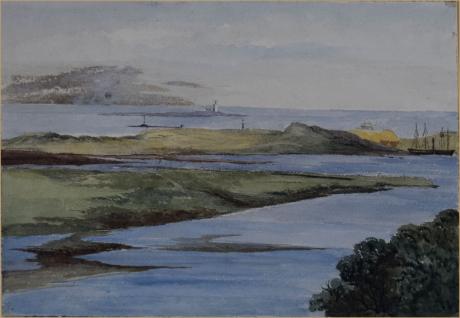 inscribed and dated in the margin " Amble & Coquet Island, Northumberland 1867"

Amble is a town, civil parish and seaport on the North Sea coast of Northumberland, England. It lies at the mouth of the River Coquet, and the nearby Coquet Island is visible from its beaches and harbour. The civil parish is called Amble by the Sea, and in 2001 had a population of 6,044, reducing slightly to 6,025 at the 2011 Census. There are two suggested origins of the place-name Amble. One theory suggests a Goidelic origin from Am Béal, meaning "tidal inlet", and is attributed to the historical presence of Irish missionaries in the area who spoke that language despite most of the local population not doing so. An earlier theory, originating with Eilert Ekwall, is an Old English origin of Amma/Anna bile, meaning "Amma's/Anna's headland". There are sources indicating that the name and variants thereof – such as Ambell and Ambhill – may have been in use as long ago as 1203 AD. Northumberland was not recorded in the Domesday Book.

Various urns, cists, flint spearheads and other evidence of ancient burials were found near to Amble in the 1880s and 1890s. Some of those remains showed signs of cremation. Outcrops of coal had been found along the coastline between the River Coquet and the River Tyne at least as long ago as the reign of Elizabeth I, when unsuccessful attempts had been made to extract and transport it in an economic manner. A failed proposal to use Amble as a port for the shipment of locally sourced coal and salt is recorded in 1618, although this failure did not discourage William Hewitt from making the then rare decision to reserve for himself the rights to the coal when he sold the townships of Amble and Hauxley in 1630. A significant factor in the failure of all the early attempts, when compared to the success of ventures in the valleys of the Tyne and the Wear, was that of economies of scale. Those more successful areas at that time had plentiful easily accessed reserves which encouraged investment and the sharing of fixed costs such as harbour facilities, buildings and machinery among a large number of enterprises.

The early situation changed as the operators in the valleys exhausted the cheaply extracted ores and found themselves having to mine deeper and also further away from the rivers that were used for transport, thus increasing their costs per unit of coal mined. Some coal was probably being shipped from previously uneconomic places such Amble and Blyth by the end of the seventeenth century, and it was certainly being extracted at Amble by that time. Amble grew in the nineteenth century as collieries were opened; and the newly built railway links to the Northumberland coalfields made the town a centre for the sea transport and export of coal. Prior to the development of the harbour, the town was "little more than a hamlet", according to the architectural guides originally compiled by Nikolaus Pevsner. The principal local mineworkings were those at Broomhill and at Radcliffe.

The harbour at Amble was the smallest of those that served the coalfields of Northumberland and Durham. It was originally under the control of the Dukes of Northumberland until, in 1837, a port authority – the Warkworth Harbour Commission – was created to supervise improvements. Following consultations with various engineers, the proposals submitted by John Rennie in 1838 were accepted. These included the construction of breakwaters to the north and the south, which were eventually completed in 1849 at a total cost of £116,000. The larger northern breakwater, which was originally 2,300 feet (700 m) in length, was extended in the early part of the 20th century but suffered from the undermining effects of the tide and required shoring with slag brought in from the ironworks of Hartlepool and Middlesbrough.

The construction of docks had also been mooted in 1844 and 1850 but the arrival of the railway led instead to the construction of coal staithes. A change in consulting engineer in 1869 resulted in extensive dredging of the harbour but did not greatly improve the prospects of the port. Shipments of coal amounted to over 500,000 tons by 1914 but this was a modest volume when compared to the other regional ports. Robert Rennison notes with regard to the relative lack of prosperity that the port served a "small and discrete coalfield". The 5.75-mile (9.25 km) railway branched on a single track to Amble at a point near to Chevington and was opened in September 1849 by the York, Newcastle and Berwick Railway, initially as a freight-only line. Passenger services between Amble and Chevington began in 1879, following the construction of a station at Broomhill in 1878 and facilities at Amble itself. The line between Amble and Broomhill was double-track. The passenger service ended in July 1930 and the general freight service was withdrawn in 1964. Coal traffic, which had amounted to around 750,000 tons annually in the 1920s, came to an end in 1969 when the line was closed completely.

Other industries, such as sea fishing and both ship building and repair in an area known as the Braid had expanded with the growth of the town. Traditional Northumbrian fishing vessels such as cobles had previously sheltered in the natural harbour for centuries.[citation needed] One local coble manufacturing business, J. & J. Harrison, founded in 1870, had been the first to introduce engines to the form and was still producing it in 1973, along with more generally utilised craft.

The Pevsner guide of 1992 says that "Today Amble is a not unpleasant small town but has few buildings of distinction." Of those, he records the church of St Cuthbert, which was originally constructed in 1870 and expanded in 1929, and its associated 1876-built vicarage. In addition, he notes some early Victorian terraces on Queen Street and North Street, as well as "a fragment of wall with a C 15 window, square-headed and of two trefoiled lights with uncusped sunk panels above. Though it may seem unlikely, this is an in situ fragment of the medieval manor house. It belonged to Tynemouth Priory and may have served as a monastic cell." This latter is found on High Street.

The fishing industry continues in Amble today, albeit with a reduced number of vessels,[citation needed] as does a small marine industry which is mainly concentrated around the construction and repair of yachts and other pleasure craft.[citation needed] A small industrial estate is located to the southwest of the town, whose clients include vehicle repairs and telecommunications companies.[citation needed] However, as of 2012, most of the units on the estate are unoccupied and the town has been affected by the closure of nearby businesses, such as a site operated by Alcan, as well as two food processing businesses in the town that employed nearly 300 people. A proposed retail development by Tesco had also been postponed due to poor trading conditions. The town's mayor announced that "the prospects for jobs are very bleak indeed."

The Royal National Lifeboat Institute maintain a station at Amble. Amble RNLI station has two lifeboats – the Shannon Class 'Shannon Elizabeth and Leonard', which replaced the Mersey Class lifeboat 'The Four Boys' in November 2016 after the station managed to raise £200,000 towards the new vessel's £2,000,000 cost. Amble's second lifeboat is the 'D Class’ Inshore Lifeboat (or ILB), the 'Mildred Holcroft'. There have been lifeboats operating from the town since 1842 and, for example, between 30 and 40 people perished in various wrecks near to Amble on 17–18 December 1872.

During the medieval period, Amble was a part of the liberty held by successive priors of Tynemouth, most of whom faced challenges to their authority from both the Crown and their major tenants. The town was ceded to the Crown in 1539, at the time of the Dissolution of the Monasteries.

Until measures such as the Reform Acts of 1832 and 1867, the electoral franchise was very restricted. In the 1826 General Election, there were nine people eligible to vote due to their freehold interests in Amble, of which six actually lived there; another voter lived in Amble but was enfranchised due to freehold interests held elsewhere. Twelve voters living in Amble qualified as freeholders or through land occupancy in the 1841 election, whilst another lived there but qualified due to property held elsewhere, and one lived elsewhere but held qualifying property in the township. Coquet Island /'ko?k?t/ is a small island of about 6 hectares (15 acres), situated 1.2 kilometres (0.75 mi) off Amble on the Northumberland coast, northeast England.

Coquet island is owned by the Duke of Northumberland. The Royal Society for the Protection of Birds manages the island as a bird reserve, for its important seabird colonies.

The most numerous species is the puffin, with over 18,000 pairs nesting in 2002, but the island is most important for the largest colony of the endangered roseate tern in Britain, which, thanks to conservation measures including the provision of nestboxes to protect the nests from gulls and bad weather, has risen to 92 pairs in 2005. Other nesting birds include sandwich tern, common tern, Arctic tern, black-legged kittiwake, fulmar, three gull species, and eider duck.

The island is uninhabited in winter, but seasonal wardens are present throughout the summer to protect the nesting birds. Landing on Coquet Island for the general public is prohibited, but local boating companies from Amble sail close up to the island in good weather throughout the summer, allowing visitors to get good views of the puffins and roseate terns.

Managing agent Royal Society for the Protection of Bird, Coquet Island also holds the remaining structure of a medieval monastery on the southwestern shore, which was largely incorporated into the 19th-century lighthouse and lighthouse keepers' cottages.

Coquet Lighthouse was built by Trinity House in 1841 at a cost of £3,268. James Walker designed the lighthouse, which is a white square tower of sandstone, with walls more than one metre thick, surrounded by a turreted parapet. The first keeper at Coquet Lighthouse was William Darling, the elder brother of Grace Darling.

The lighthouse was initially provided with a large (first-order) fixed dioptric along with a set of mirrors (which were replaced with refracting prisms ten years later); the lens was by Isaac Cookson & co. of Newcastle upon Tyne. The lamp was oil-fuelled. In 1854 red sectors were added, to warn ships of Hauxley Point to the south and Boulmer Rocks to the north. Later a second sector light was added, pointing south from a lower window in the tower. By the 1890s the main light was made occulting.

In 1976 the light was electrified and 1990 the lighthouse was automated, at which point a set of quartz halogen sealed beam lamps were installed in place of the old optic. Subsequently, a small revolving optic was installed, mounted on an AGA PRB gearless drive. Coquet's light has been solar powered since 2008.The original 1841-51 optic is now on public display, along with the old occulting apparatus, at Souter Lighthouse, further down the coast.

Lying a mile off the coast at Amble is the protected RSPB reserve of Coquet Island, a bird watching haven. Throbbing with birds, some 35,000 seabirds cram onto this tiny island to nest during the summer months.

This birdlife haven holds 90% of the UK’s roseate tern population – one of the country’s rarest nesting seabirds. Other nesting species here include fulmars, kittiwakes, eider ducks and oystercatchers.

The island is most famous for its colourful puffins, who return in their thousands each spring to breed. Their brightly coloured beaks, waddling gait and comical appearance have earned these birds nicknames such as ‘sea parrot’ or ‘clown of the sea’.