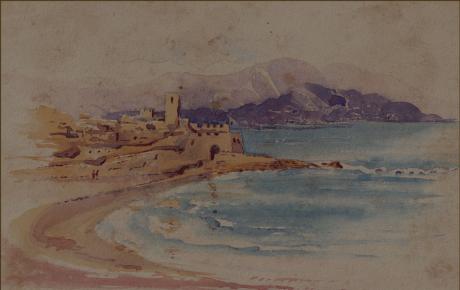 inscribed on the mount "Antibes"

Antibes is a coastal city in the Alpes-Maritimes department of southeastern France, on the Côte d'Azur between Cannes and Nice. The town of Juan-les-Pins is in the commune of Antibes and the Sophia Antipolis technology park is northwest of it.

Traces of occupation dating back to the early Iron Age have been found in the areas of the castle and cathedral. Remains beneath the Holy Spirit Chapel show there was an indigenous community with ties with Mediterranean populations, including the Etruscans, as evidenced by the presence of numerous underwater amphorae and wrecks off Antibes. However, most trade was with the Greek world, via the Phocaeans of Marseille. Antibes was founded by as a Greek colony by Phocaeans from Massilia. They named it Antipolis (Greek: Ἀντίπολις, lit. "Opposite-City") from its position on the opposite side of the Var estuary from Nice (Greek: Νίκαια).

Current research suggests that Antipolis was founded relatively late (4th century BC), to benefit from the protection of Marseille with its trade routes along the coast and strongholds like Olbia at Hyères, and trading posts such as Antipolis itself and later Nikaia; it is mentioned by Strabo. The exact location of the Greek city is not well known. Given Greek colonial practices, it is likely that it was set at the foot of the rock of Antibes, in today's old city. Traces of occupation in the Hellenistic period have been identified around the castle and the church (former cathedral). The goods unearthed during these excavations show the dominance of imported products of the Marseilles region, associated with Campanian and indigenous ceramics.

Early in the second century BC the Ligurian Deceates and Oxybiens tribes launched repeated attacks against Nikaia and Antipolis. The Greeks of Marseille appealed to Rome as they had already done a few years earlier against the federation of Salyens. In 154 BC the consul Quintus Opimius defeated the Décéates and Oxybiens and took Aegythna from the Décéates.

Rome gradually increased its hold over the Mediterranean coast. In 43 BC, Antipolis was officially incorporated in the propraetorial (senatorial from 27 BC) province of Narbonesian Gaul, in which it remained for the next 500 years. Antipolis grew into the largest town in the region and a main entry point into Gaul. Roman artifacts such as aqueducts, fortified walls, and amphoræ can still be seen today.

Excavations in the old town have discovered well-preserved houses showing some luxury. Among them, the most monumental are those in the rectory garden of rue Clemenceau. These show a comparable level to that of the Gallo-Roman domus such as those of Saint-Romain-en-Gal. Large parts of the floor mosaic are organised around a courtyard with a marble fountain. The building dates from the late third century, although parts date from the end of the Hellenistic era or the end of the Roman Republic. Another house paved with porphyry and green stone was excavated between rue des Palmiers and the rue de la Blancherie. The finds at the Antibes Museum of Archaeology suggests the main occupation between the 2nd and 4th century. Finds from the end of the Hellenistic era and the end of the Roman Republic is present on both sites.

The city was supplied with water by two aqueducts. The Fontvieille aqueduct rises in Biot, and eventually joins the coast below the RN7 and the railway track at the Fort Carré. It was rediscovered and restored in the 18th century by the Chevalier d'Aguillon to supply the modern city.

Like most Roman towns, Antipolis possessed buildings for shows and entertainment. A Roman theatre is attested by the tombstone of the child "Septentrion". The inscription says "he danced and was popular on the stage of the theatre". The theatre was located, like the amphitheatre, between Rue de la République and Rue de Fersen, near the Porte Royale. The back wall is positioned substantially next to Rue Fourmillère. A radial wall was found on the right side of the bus station. A plan of the theatre made in the 16th century is in the Marciana National Library of Venice.

The remains of the amphitheatre were still visible at the end of the 17th century during the restructuring of the fortifications of the city. A concentric oval was still visible in many plans of the seventeenth century and in a map of Antibes from the early nineteenth century. These remains are now covered by the Fersen middle school.

The Bishopric of Antibes was established c.450 by Pope Leo I, the first two bishops being Armentarius and Agroecius.[11][9] Shortly after the bishopric was established the Western Roman Empire collapsed, and by the end of the century the Antibes region had become part of the Kingdom of the Franks, which later grew into the Carolingian Empire. The Frankish empire provided three centuries of stability but then fell apart itself in the mid-ninth century, leading to a further period of upheaval.

The dust eventually settled to leave Antibes within the territory of the County of Provence, itself part of the Kingdom of Arles and later the Holy Roman Empire. In the tenth century the coastal areas of Provence were menaced by 'Saracen' raiders from Muslim Spain, who were finally driven out when Count William I of Provence captured their stronghold at Fraxinetum in 975. William rewarded the knights who had fought for him in this campaign by enfeoffing them with the liberated lands in southern Provence. One of these knights was a certain Rodoald, who became Lord of Antibes.

Rodoald's great-grandson Raimbaud appears to have relocated inland to Grasse around 1050, and his descendants [fr] sold the Lordship of Antibes to the bishopric during the episcopate of Bishop Bertrand (fl.1166-76).

During this period Antibes was still being raided periodically by Saracen pirates, and in 1124 they burned down Antibes Cathedral. The marauders continued to prey on the town over the following century, and in 1244 the Prince-Bishops of Antibes moved to Grasse to escape their depredations. They remained there for the next five centuries, despite an attempt to lure them back to Antibes by rebuilding the cathedral in 1250.

When the Western Schism began in 1378, splitting the Catholic world between two rival popes, the Bishop of Grasse backed Pope Urban VI even though Marie de Blois, mother of and regent to the infant Count Louis II of Provence, was a supporter of Urban's enemy Antipope Clement VII. In 1383 Marie therefore confiscated the Lordship of Antibes from the Bishops of Grasse and two years later awarded it to the brothers Marc and Luc Grimaldi, of the Genoese House of Grimaldi. The new Grimaldi lords built the Château Grimaldi as their residence in the town.

After the deaths of the Grimaldi brothers (Marc in 1398 and Luc in 1409), control of the Lordship of Antibes passed to five co-heirs. As a result of this fragmentation of power, the actions of individual local lords became increasingly irrelevant to the town's history, with the higher authority of the Count of Provence assuming greater significance instead.

With the death in 1481 of Count Charles III, Provence was inherited by King Louis XI of France and thereby annexed to France. As Antibes was in the far southeast of the County of Provence it therefore became the border town at France's southeastern extremity, guarding the frontier with the County of Nice, which was part of the Savoyard state. As such it was on the front line during the Italian Wars waged by France against Emperor Charles V, and was sacked in 1536 by Andrea Doria, a Genoese admiral in imperial service.[16] Henry II of France therefore ordered the construction of Fort Carré in 1550 to guard the town against any future attacks, and the citadel was later reinforced by the renowned French military engineer Vauban.

In December 1746, during the War of the Austrian Succession, an Austro-Savoyard army under the command of Maximilian Ulysses Browne invaded France and besieged Antibes, subjecting the town to a heavy bombardment. The arrival of French reinforcements, and a revolt against the Austrian garrison at Genoa, obliged Browne to lift the siege on 1 February 1747, but by that point his guns had levelled 350 houses and also destroyed the cathedral again. The latter was subsequently rebuilt by Louis XV of France, and this version of the building is the one that has survived to the present day.

On March 1, 1815, Napoléon Bonaparte landed on the beach at Golfe-Juan, 5 km southwest of Antibes, having escaped exile on the island of Elba. He hoped for a warm welcome in Antibes, which had been supportive of his regime, but the townspeople closed their gates to him and he was therefore obliged to move on northward without stopping. He successfully reached Paris and seized power again, only to be conclusively defeated at the Battle of Waterloo. Today Golfe-Juan marks the beginning of the Route Napoléon, which traces the path taken by the emperor on his return from exile.

Under the Treaty of Turin (1860), Nice was ceded to France by the new Kingdom of Italy, and Antibes therefore ceased to be a border town as the frontier moved 50 km eastward to Menton.

From around the middle of the 19th century the Antibes area regained its popularity, as wealthy people from around Europe discovered its natural environment and built luxurious homes there.[citation needed] It was transferred from its former department of Var to the new one of Alpes Maritimes in 1860. The harbor was again used for a "considerable" fishing industry and the area exported dried fruit, salt fish, and oil.[7]

By the First World War, it had been connected by rail with Nice and most of its fortifications had been demolished to make way for new residential districts.[17] In 1926, the old Château Grimaldi was bought by the local municipality and later restored for use as a museum. Pablo Picasso came to the town in 1946, having visited his friend and fellow painter Gerald Murphy and his wife Sara there in 1923, and was invited to stay in the castle. During his six-month stay, Picasso painted and drew, as well as crafting ceramics and tapestries. When he departed, Picasso left a number of his works to the municipality. The castle has since become the Picasso Museum.

On 25 May 1999, the town was the first in the départment to sign the State Environment Charter, which pledges to actively conserve the natural environment. Sport is an important part of the local culture; the town hosts the National Training Centre for basketball. The now demolished Jean Bunoz Sports Hall hosted several games of the 1999 FIBA EuroBasket. The city is home to Olympique Antibes, a professional basketball team of France's top division LNB Pro A, which plays its home games at the Azur Arena Antibes.

There is a jazz festival, Jazz à Juan, in July.