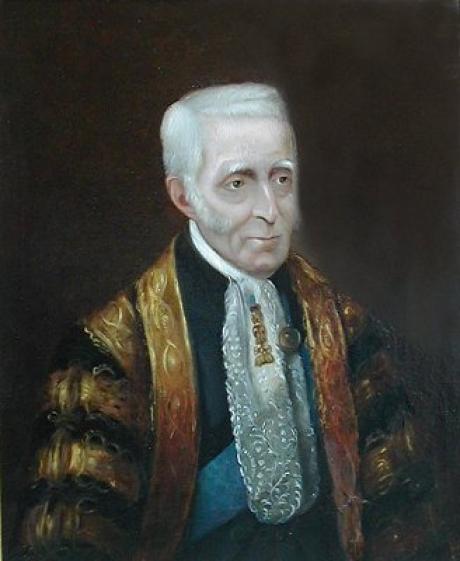 Antoine Claudet's celebrated daguerreotype of 1842, which would give the earliest date for teh painting. the Robes may very well be derived from John Lucas's full length portrait of Wellington, commissioned by the university and now hanging in the examination schools.

The university of Oxford, which had created him D.C.L. on 14 June 1814, elected him chancellor on 29 Jan. 1834, and he was received with the wildest enthusiasm when he went there to be installed on 9 June (CROKER, ii. 225). His election helped to cause a temporary coolness between him and Peel, who had declined an invitation to stand, but was nevertheless sore on the subject (PEEL, ii. 227-37).The Wellington Medal which was minted to commemorate his induction as Chancellor of Oxford University in 1834, the medal is seen in the portrait to the immediate right of an order he is wearing, the medal is showing on the right edge of the lace jabot he is wearing. He enjoyed being elected by acclaim as chancellor of Oxford University in 1834 (one of only two non-Oxonians since Oliver Cromwell to occupy this office), and his enjoyment, even as the most loyal of subjects, was not diminished when, on a fraternal visit to Cambridge to see Prince Albert installed as chancellor there, he was greeted with more enthusiasm than his royal counterpart, and more even than the Queen herself. Arthur Wellesley, the son of the Earl of Mornington, was born in Dublin in 1769. After being educated at Eton and a military school at Angers he received a commission in the 73rd Infantry. Eventually Wellesley obtained the rank of captain and became aide-de-camp to the Lord-Lieutenant of Ireland. In 1797 Wellesley was sent to India. With Napoleon gaining victories in Egypt, Wellesley was dispatched to deal with Tippoo Sahib of Mysore. As brigade commander under General George Harris he impressed his superiors throughout the Seringapatam expedition and was made administrator of the conquered territory. Wellesley returned to England in 1805 and the following year he was elected as the MP for Rye in Sussex. A year after entering the House of Commons, the Duke of Portland appointed Wellesley as his Irish Secretary. Although a member of the government, Arthur Wellesley remained in the army and in 1808 he was sent to aid the Portuguese against the French. After a victory at Vimeiro he returned to England but the following year he was asked to assume command of the British Army in the Peninsular War. In 1812 the French were forced out of Spain and Wellesley reinforced his victory against the French at Toulouse. In 1814 Wellesley was granted the title, the Duke of Wellington. He was then put in command of the forces which defeated Napoleon at Waterloo in June, 1815. Parliament rewarded this military victory by granting Wellington the Hampshire estate of Strathfieldsaye. In 1818 the Duke of Wellington returned to politics when he accepted the invitation of Lord Liverpool to join his Tory administration as master-General of the Ordnance. In 1829 Wellington assisted Robert Peel in his efforts to reorganize the Metropolitan Police. In 1828 Wellington replaced Lord Goderich as prime minister. Although Wellington and the Home Secretary, Robert Peel, had always opposed Catholic Emancipation they began to reconsider their views after they received information on the possibility of an Irish rebellion. As Peel said to Wellington: "though emancipation was a great danger, civil strife was a greater danger". King George IV was violently opposed to Catholic Emancipation but after Wellington threatened to resign, the king reluctantly agreed to a change in the law. In 1830 unemployment in rural areas began to grow and the invention of the threshing machine posed another threat to the economic prosperity of the farm labourer. The summer and autumn of 1830 saw a wave of riots, rick-burnings and machine-breaking. In a debate in the House of Lords in November, Earl Grey, the Whig leader, suggested that the best way to reduce this violence was to introduce parliamentary reform. The Duke of Wellington replied that the existing constitution was so perfect that he could not imagine any possible alternative that would be an improvement on the present system. In the speech Wellington made it clear that he had no intention of introducing parliamentary reform. When news of what Wellington had said in Parliament was reported, his home in London was attacked by a mob. Now extremely unpopular with the public, Wellington began to consider resigning from office. On 15th November, 1830 Wellington's government was defeated in a vote in the House of Commons. The new king, William IV, was more sympathetic to reform than his predecessor and two days later decided to ask Earl Grey to form a government. As soon as Grey became prime minister he formed a cabinet committee to produce a plan for parliamentary reform. Details of the proposals were announced on 3rd February 1831. The bill was passed by the House of Commons by a majority of 136, but despite a powerful speech by Earl Grey, the bill was defeated in the House of Lords by forty-one. Wellington attended the opening of the Liverpool to Manchester Railway but was deeply upset by the way he was booed and hissed by the crowds as his train entered Manchester. This was a reaction to his views on the Peterloo Massacre and his opposition to the 1832 Reform Act. This experience made him hostile to the railways and he warned that cheap travel may result in revolution. However, Wellington later changed his mind about the railways after he developed a close relationship with George Hudson. Hudson helped Wellington make a great deal of money by advising him when to buy and sell railway shares. Wellington retired from public life in 1846 but in 1848 he organised a military force to protect London against possible Chartist violence at the large meeting at Kennington Common. Arthur Wellesley, the Duke of Wellington died in 1852 and is buried in St Paul's Cathedral.

Frederick Richard Say (bap. 1805, d. 1868), engraver, the youngest and only surviving son of William Say, was baptized on 1 February 1805 at St Marylebone, Marylebone Road, Middlesex, and enjoyed a highly successful practice as a portrait painter. Among his sitters were George IV (of whom he made a drawing, c.1827, which was engraved in mezzotint by his father and published in May 1827), Prince Albert, the archbishop of York, Earl Grey, and Edward Bulwer-Lytton, which last portrait was considered to be his best. His works were engraved by Samuel Cousins, James Thomson, G. R. Ward, and William Walker. He exhibited at the Royal Academy, the British Institution, and Suffolk Street from 1826 to 1854, and his address from 1837 to 1858 was 18 Harley Street. He married, in 1848, Henrietta, née Thompson (1808–1872), with whom he had at least one son and one daughter. In 1851 their domestic arrangements included two nurses and five servants. By 1861, when he was living at Victoria Terrace, Upton Park, Slough, Buckinghamshire, he spelled his surname as Saye, and sometimes spelled his forename as Frederic. He died at Upton Park on 29 March 1868. The National Portrait Gallery, London, the Scottish National Portrait Gallery, the National Trust, and the India Office, London, hold examples of his work.