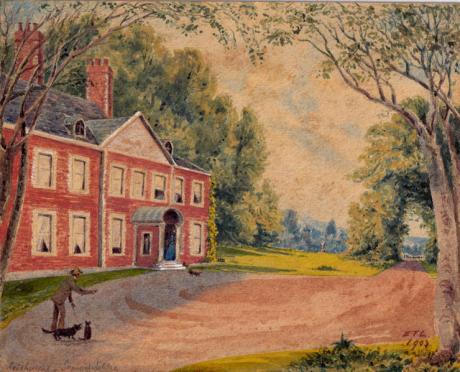 pencil and watercolour
20 x 25 cm.
Enquire about this item

Avishays or Avishayes House (it seems to be spelt both ways in different sources) is located in the parish of Chaffcombe about half a mile south of the village. It is also a mile to the east of the edge of the town of Chard. The house was built in the 17th century but substantially altered 1745-59. It was owned by the Sealy and Marwood families from 1697 until 1859 when it was sold to a Chard solicitor called Edward Clarke. 200 metres east of the house on Castle Hill and on the site of a ruined sham castle, a single storey decorative building was constructed from rubble stone and flint and dressed with Ham stone. It was probably built for Edward Clarke The parapet was castellated. It was a water tower supplying water to the house but also acted as an eye-catcher when viewed from the house.

The building became known as the Monmouth Tower, in memory of Elias Sealy who owned Avishays at the time of the Monmouth Rebellion in 1685. He supported Monmouth and narrowly avoided arrest after Monmouth's defeat at the Battle of Sedgemoor by hiding in a tree in the grounds of Avishays. The tower is also known as The Castle. The clock tower was apparently added to the top of the Monmouth Tower in around 1985 by the then owner of Avishays, David Cavender. The chiming clock, which has only one face, was made by Gillet & Johnson of Croydon and dates from the 19th century.

Avishays on Whiteway Hill is a large detached house which was partly built in the 17th century, but substantially altered between 1745 and 1759. The building was first recorded in 1316 as Aveneleseigh, from Oliver Avenel, and then changed hands many times. In the 17th century the Browne family leased it to the Sealy family, who purchased it in 1697, thereafter descendants of the Sealy family held it until it was sold to a Chard solicitor, Edward Clarke, in 1859.In the grounds are an 18th-century former stables and coach house, ice house and various other outbuildings.

The Clock Turret about 180 metres east of Avishays, which is also known as the Monmouth Tower or The Castle, is a 19th-century folly. It stands on the site of a former sham castle which had fallen into ruin, and served as a water tower as well as having a clock on the west side facing the house. The clock, which has a hand wound mechanism, was built by Gillett and Johnson of Croydon and was originally at Highclere Castle in Hampshire. The name Monmouth Tower comes from the escape of Elias Sealy, who owned the house, a follower of the Duke of Monmouth during the Monmouth Rebellion, who hid in a tree in the grounds when the troops of James II came looking for him.