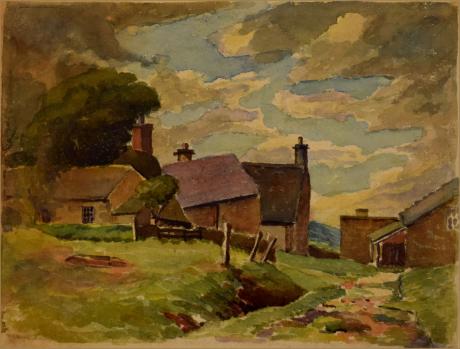 Werneth Low is a hill in Greater Manchester, England, and a part of the Pennines. It is located on the borders of Stockport and Tameside and rises to a height of 279 metres (915 ft). The villages of Woodley, Greave, Gee Cross, Mottram and Romiley lie on the sides of the low.

The term "low" does not refer to any lack of altitude, it being a North English word for hill.

Werneth Low offers panoramic views over the Greater Manchester Urban Area and in clear weather, the Winter Hill transmitting station can be seen from here. To the south, Stockport town centre, part of Wythenshawe in south Manchester and the Welsh Mountains can be viewed in clear weather.

The majority of Werneth Low is administered jointly by Hyde War Memorial Trust (link below) and Tameside Council. The Trust organise the Remembrance and Peace day services. The trust was established to be guardian of Werneth Low and to keep it "For the people of Hyde" and provide a lasting monument to the 710 men of Hyde that perished in World War I.

Various landmarks can be seen from the top of Werneth Low. For example, Manchester's Beetham Tower; the Oldham Civic Centre; and Jodrell Bank Observatory's radio telescope (visible from the South Western End of the hilltop). A flint knife and a Bronze Age stone mace head have been discovered on Werneth Low. Hangingbank is the site of a possible Iron Age farmstead dating to the first millennium BC, enclosed by a double ditch and featuring crop marks. A Roman road from Melandra to Astbury probably crosses the hill, however the exact course has not been identified. The site covers 1.23 hectares (3.0 acres).[4] There is also evidence of Romano-British activity on Werneth Low, a sherd of Roman pottery dating to the 2nd century AD was discovered in the material filling one of the ditches at Hangingbank, indicating that was when the site fell out of use. There is a possible temporary Roman camp and excavations have recovered a posthole. The name Werneth derives from the Welsh verno for alder meaning 'the place where alders grow'.

In 1920 Lower Higham Farm and all its land was purchased by the War Memorial Committee of the Hyde Borough Council in 1920, and in 1921 Hyde's main war memorial was officially unveiled. A Royal Observer Corps monitoring post was active here from 1962 to 1968, it was intended to give warning of hostile aircraft and nuclear attacks on the United Kingdom. In the late 1980s, Greater Manchester Council, Tameside Metropolitan Borough Council and the Hyde War Memorial Trust worked together to establish Werneth Low country park which covers 80 hectares (200 acres); the park was officially opened in 1980.