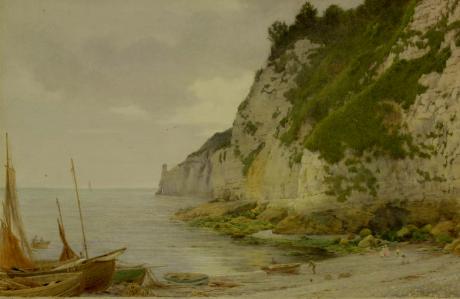 By family descent from the artist.

Beer is mentioned in the Domesday Book of 1086, at which time it was located within Colyton hundred and had 28 households. Its name is not derived from the drink, but from the Old English word bearu, meaning "grove" and referring to the original forestation that surrounded the village.

It is a pretty coastal village that grew up around a smugglers' cove and caves which were once used to store contraband goods. These are now part of the attraction of the village. Many of the buildings are faced with flint, a hard glassy stone found in the local chalk rock.

Beer grew up around a smuggler’s cove and the caves, which still characterize this picturesque town on Lyme Bay. The men of Beer were once known as the 'the very kings of smugglers' and the caves were used to store all kinds of contraband. However, surprisingly, the town does not take its name from the barrels of the good stuff that would have inevitably been stored in these aforementioned hidey holes. Beer is an Anglo-Saxon word and refers to the forests which used to surround this particular hamlet. The smuggling history is very much reflected in the town today and Jack Rattenbury is notorious as the most famous smuggler in the South West.

In the late 18th century and early 19th century, smuggling provided many citizens of Beer with an income on both sides of the law. According to George Pulman in ‘The Book of the Axe’, published in 1875, “In former days, when the coastguard was inefficient and the exciseman lax, the Beer men were the very kings of smugglers.”

Beer fishermen had always had a fine reputation for their ability to handle and sail boats. With this ability and the ideal geographical location for landing contraband and transportation to remote farms and houses, smuggling became an alternative “trade” for some of the fishermen. By 1750, the area was so notorious that the local revenue officers were reinforced by dragoons posted in Beer, Branscombe and Seaton.

The boats used were Beer luggers, built in Beer, between 25ft to 35ft in length. They usually had a 4 man crew. Much of the contraband was brought in from the Channel Island of Alderney, but in some cases the smugglers would collect contraband from the North coast of France. As well as casks of brandy, tea, tobacco and silk were other commodities that were smuggled into Beer.

Not all of the inhabitants of Beer were smugglers, indeed some worked for the authorities to catch the smugglers. This could prove complicated and there are reported instances of coastguards being bribed to turn a blind eye at the appropriate time. The honest citizens could also make money from smuggling by informing on the smugglers or by retrieving the contraband. Revenue Cutter captains were rewarded for the contraband once it was handed over to the authorities and sold.

If a smuggler was being chased by a Revenue Cutter or had received a signal from shore, usually a fire, that coastguards were about, then the casks could be roped together in a raft and sunk offshore and its position marked by a float for later retrieval by “creeping”, fishing up the tubs using grappling hooks. In the event that the smuggler did not have time to sink a raft, then the kegs could be thrown overboard. To secure a conviction, the Cutter required both the smuggler and the contraband, so by separating himself from the contraband increased the smuggler’s chances of escape, especially as the contraband could be of financial benefit to the Revenue Cutter captain. Revenue cutter crews would also “creep” for contraband if they thought they knew where a raft of kegs had been sunk.

One of the most famous smugglers was Jack Rattenbury. He was born in Beer in 1778 to a Beer woman, Anne Newton who was married to a Honiton man, John Rattenbury. After thirty years at sea as a fisherman, pilot, seaman and smuggler he wrote about his life in a book, ‘Memoirs of a Smuggler’, which was published in 1837.

In 1896 Sir Walter Besant and James Rice wrote a novel based on Jack Rattenbury and set in Lyme Bay. The titleof the novel is “Twas in Trafalgar Bay”.

Historically, the main sources of income for the village include fishing and lace production.Boats are winched up the beach as there is no harbour, and fresh fish is sold nearby. Nowadays small electrically driven winches using steel cables or tractors are located on the beach to haul boats in. Higher up is an old manual capstan operated by up to 20 men, now disused. A brook winds its way in an open conduit alongside the main road down to the sea. A WW2 pillbox is located close to the western side of the beach exit.

The shape of the coastline allowed local seafarers to operate in weather conditions when other towns could not, because it is protected from the prevailing westerly winds by Beer Head and the chalk cliffs which are the furthest outcrop of limestone on the southwest coast.

Beer has a steep pebble beach. This makes walking on the beach difficult. Long rubber mats — actually recycled conveyor belts — are laid down to assist walkers. Beer is home to a cave complex, the Beer Quarry Caves, resulting from the quarrying of Beer stone. This stone has been prized since Roman times, because of its workability for carving and for its gentle yellow colour on exposure to air. Beer stone was used in the construction of 24 cathedrals[citation needed] around the UK, including Exeter Cathedral, Westminster Abbey and St. Paul's Cathedral, and was also used in the building of Christchurch Cathedral, St.Louis. Missouri, USA. Bovey House, an Elizabethan manor house, is a mile inland. The enormous Beer Quarry Caves produce this stone which has been used in the construction of many cathedrals throughout the UK and the world. Notorious for its unique workability for carving and its colouring on exposure to air, it can be seen locally and at such iconic buildings as Westminster Abbey, St Paul’s Cathedral and as far away as Christchurch Cathedral in New York. Even Buckingham Palace has taken advantage of this particular product of Beer.

The Manor dates back to 1122 and Henry VIII included it in the dowry of Catherine Parr. Tradition has it that neighboring villages jokingly refer to Beer's inhabitants as Spaniards, due to the fact a Spanish vessel, possibly of the Armada, was wrecked nearby and the survivors settled in the sparsely populated town which had been ravaged by the plague.

Starre House, the oldest house in Beer is built using the local Beer stone that has been quarried since Roman times.

Bacteria taken from cliffs at Beer on the south coast were launched to the International Space Station in 2008.The Beer microbes were placed on the European Space Agency's (ESA) Technology Exposure Facility and were sent up still sitting on, and in, small chunks of cliff rock from the Jurassic Coast. After 553-days they found that many were still alive. The survivors are now reproducing in a laboratory. This was part of an experiment to study the survival of microbes (which naturally live on the stone) in extreme conditions. A new species of cyanobacteria was isolated at the Open University that could be used in future space settlements on the Moon and Mars to produce oxygen and break down rocks.

George Marks painted landscapes with idealised titles: Autumn Glow, A Gleam of Sunshine, Rose Garden and The Rhododendron Walk. He was born in Long Row, Lanarkshire, Scotland and He lived in Penge and later in Shere near Guildford, and painted mainly in Kent, Surrey and Sussex. Marks exhibited at the Royal Academy between 1878 and 1930. He was a most admired watercolourist who exhibited at the Royal Academy, Royal Watercolour Society, New Watercolour Society and elsewhere. He died on 26 Nov 1933 in Airdrie, Lanarkshire, Scotland.