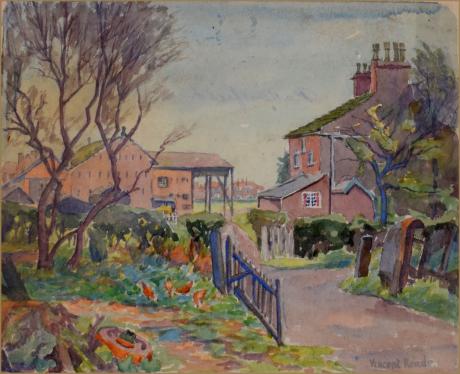 Late in the Roman occupation of Britain a hoard of about 200 gold coins was hidden in the valley of the Gore Brook. These coins date from the 2nd and 3rd centuries AD and were found where Birchfields Road crosses the brook in the 1890s. They are now kept in the Manchester Museum. Records of the name Rusholme do not appear until the mid-13th century when "Russum" is mentioned; at this time it is known that a house existed at Platt which was replaced by a larger house of black and white construction which was the home of the Platts until the mid-18th century when the present classical building replaced it. An early record of the Platt estate mentions the Nico Ditch, an Anglo-Saxon linear earthwork which runs east–west through the area and was probably used as an administrative boundary. It dates from the 8th or 9th century. Tales of battles between the Danes and the Normans associated with the road names of Danes Road and Norman Road are not accepted by historians. Another black and white hall existed at Birch; this was probably built in the 16th century. The economy of the area was dependent on agriculture until the 18th century; however during the 17th and 18th centuries there was a growth of cottage industries such as spinning, weaving and brickmaking.

Historically the name relates to the Birch family who in the 12th century acquired lands in this area and subsequently built Birch Hall and the small family Birch Chapel. Several of the Birch family are said to have distinguished themselves in the French wars of the 15th century, but its most noteworthy member was Colonel Thomas Birch, a Puritan and Parliamentarian of a somewhat brutal type, who took an active part in the Civil War in Lancashire. He was made Governor of Liverpool on the recapture of the town in 1644, and represented it in Parliament from 1649 to 1658. On the Restoration he retired into private life, and was in 1678 succeeded by his son Thomas Birch the antiquary, Thomas's son died without issue, and his brother, Dr. Peter Birch, a prebendary of Westminster, came into possession. He died in 1710, and his son Humphrey, sold the Birch estate to a Manchester merchant, George Croxton for £6000 in 1743. Two years later the estate was acquired by John Dickenson, another well known Manchester merchant.

Birch Hall stands in a pleasant situation to the east of the church, well protected on three sides by trees, and overlooking Birch Fields on the north. The original site would seem to have been determined by a small brook, which still forms the boundary of the grounds of the hall on the south side. The house was originally a timber and plaster building of considerable extent, to judge from the list of rooms mentioned in an inventory taken in 1678, but the only portion now remaining has been so much modernized and added to that it presents little or nothing of its former appearance. It consists of two wings at right angles facing north and west, the latter of which appears to be part of a 17th-century building. A good deal of the timber construction of the outer walls, and the old roof, still remains, though the walls have been much restored and filled in with brickwork at a later time and new windows inserted. The west elevation and the end gable facing north, however, retain something of their old black and white appearance, though the gable has been mutilated by later work, and portion of the 'half-timber' framing is only plaster and paint. The north wing is of brick with stone quoins, and is probably a rebuilding of a former timber structure. In front of this, at a later time, most likely at the beginning of the 19th century, a new brick front, consisting of two rooms and entrance, has been added, projecting considerably in front of the north wing, and altogether altering the appearance of the house. The building is of two stories with grey stone slated roofs, and all the brickwork is painted yellow. In the west wing are three upper rooms with good 17th century oak wainscot, but the panelling is not all in its original position, and in one room is painted over. There is a small oak stair to an attic, and one or two old windows remain with diamond quarries. There are portions of 17th century woodwork in different parts of the house, the fittings of the old building no doubt being treated with little respect in the later alterations. These have been so effective that nothing very definite can be stated as to the original plan or arrangement of the house. There are brick outbuildings on the south side at the end of the west wing.

According to the Baptisms of St James's Church Rusholme , The Birchfold Farm was occupied by Benjamin Ratcliffe & Annie Barker