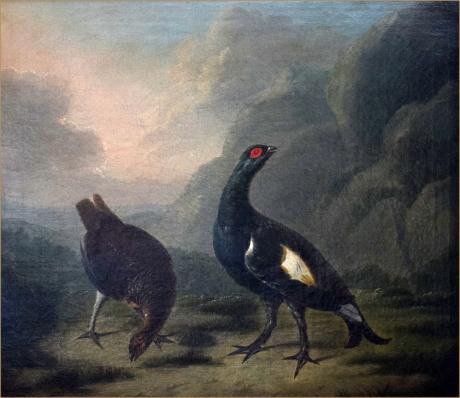 The black grouse or blackgame or blackcock (Tetrao tetrix) is a large game bird in the grouse family. It is a sedentary species, breeding across northern Eurasia in moorland and bog areas near to woodland, mostly boreal. The black grouse is closely related to the Caucasian grouse.

In the Uk there was a dramatic decline in Black Grouse from the 18th century, when birds were found in nearly all British counties, to the current situation where they cling to existence in a few corners of upland Britain.

The female is greyish-brown and has a cackling call. She takes all responsibility for nesting and caring for the chicks, as is typical with gamebirds. The black grouse's genome was sequenced in 2014. The black grouse is one of the many species first described in the 10th edition of Systema Naturae in 1758 by Carl Linnaeus, and still bears its original binomial name. Both Tetrao and tetrix come from Ancient Greek words referring to some form of game bird.

The male and female are sometimes referred to by their folk names, blackcock and greyhen respectively. These names first occur in the literature with John Ray in 1674. Heathcock and Heathhen are also common names.The black grouse is a large bird with males being around 53 centimetres (21 in) long and weighing 1,000–1,450 g (2.20–3.20 lb) and females approximately 40 cm (16 in) and weighing 750–1,110 g (1.65–2.45 lb). The cock is very distinctive, with black plumage, apart from red wattles and a white wingbar, and a lyre-shaped tail, which appears forked in flight. His song is loud, bubbling and somewhat dove-like.

Black grouse can be found across Europe (Swiss-Italian-French Alps specially) from Great Britain (but not Ireland) through Scandinavia and Estonia into Russia. In Eastern Europe they can be found in Hungary, Latvia, Lithuania, Poland, Belarus, Romania and Ukraine. There is a population in the Alps, and isolated remnants in Germany, France, Belgium and the Netherlands. It formerly occurred in Denmark, but the Danish Ornithological Society (DOF) has considered it extinct since 2001. The species disappeared from Bulgaria in the 19th century.

Although this species is declining in western Europe, it is not considered to be vulnerable globally due to the large population (global estimate is 15-40 million individuals) and slow rate of decline. Its decline is due to loss of habitat, disturbance, predation by foxes, crows, etc., and small populations gradually dying out. The IUCN implemented a Black Grouse Action Plan 2007–2010. This has looked at local populations that are vulnerable to the extinction vortex. For example, in Styria in Austria. In the United Kingdom black grouse are found in upland areas of Wales, the Pennines and most of Scotland. Best looked for on farmland and moorland with nearby forestry or scattered trees. They have traditional lek sites where the males display.

They have declined in some parts of the UK (especially England), having disappeared from many of their former haunts. They are now extirpated in Lancashire, Derbyshire, Exmoor, East Yorkshire, New Forest, Nottinghamshire, Worcestershire, Quantock Hills, Cornwall, Dartmoor, Kent, Wiltshire and Surrey.

A programme to re-introduce black grouse into the wild started in 2003 in the Upper Derwent Valley area of the Peak District in England. 30 grouse were released in October 2003, followed by 10 male grouse in December 2004 and a further 10 males and 10 females in April 2005. The programme is being run jointly by the National Trust, Severn Trent Water and Peak District National Park. Conservation groups helping to revive the black grouse include the RSPB and the Game & Wildlife Conservation Trust. In France there has been much work regarding the birds and their risk of flying into ski-lifts.

Black grouse have a very distinctive and well-recorded courtship ritual or game. At dawn in the spring, the males strut around in a traditional area and display whilst making a highly distinctive mating call. This process is called a lek—the grouse are said to be lekking. In western Europe these gatherings seldom involve more than 40 birds; in Russia 150 is not uncommon and 200 have been recorded. The tails of black-cocks have, since late Victorian times, been popular adornments for hats worn with Highland Dress. Most commonly associated with Glengarry and Balmoral or Tam o' Shanter caps, they still continue to be worn by pipers of civilian and military pipe bands. Since 1904, all ranks of the Royal Scots and King's Own Scottish Borderers have worn them in their full-dress headgear and that tradition is carried on in the dress glengarries of the current Scottish super regiment, the Royal Regiment of Scotland.

Stephen Elmer,  (bap. 1715, d. 1796), still-life painter, was baptized on 1 April 1715 at Farnham in Surrey, the son of Stephen Elmer. His father painted murals for St Andrew's Church, Farnham, and Elmer trained in his studio, depicting dead game, and in time became a successful painter of still lifes. He was a member of the Free Society of Artists in 1768, and exhibited 113 pictures up to 1772. In that year he was elected associate of the Royal Academy and contributed 117 paintings to its exhibitions over the next twenty-five years. His works, which were very popular, were painted in a bold, free manner, showing the influence of French and Dutch artists such as Jan Fyt. Elmer's subjects included birds, dogs, fish, flowers, and fruit. He received many commissions from aristocratic patrons to paint prize game and was compared favourably to Stubbs. He also painted portraits including one of a local florist and gardener, John Cartwright, which was engraved by J. M. Ardell (1748). He occasionally painted genre pictures, such as The Miser (engraved by B. Granger), but by far his most ambitious picture is The Last Supper, formerly over the altar, now in the vestry of Farnham church. By 1781 he owned two houses in West Street, Farnham, and acted as landlord to a local brewhouse. A collection of his paintings is kept in his former home in West Street, Willmer House, now the Museum of Farnham, Surrey, which in 1996 acquired a portrait of Thomas Ashburne, aged eleven, signed and dated by Elmer in 1735. Elmer died, unmarried, at Willmer House, and was buried at Farnham in 1796. He left his property to his niece Caroline, and a large collection of his paintings and his painting equipment to his nephew, William. The paintings were exhibited at the great room at 28 Haymarket, London, in 1799, under the title ‘Elmer's sportsman's exhibition’, when it was noted in the catalogue that:

this modest, unassuming and admirable artist, retained for half a century the first rank in that branch of the arts which he professed and practised. In laborious and high-finishing he may have been equalled by some of the Flemish and Dutch painters; but, in accuracy of drawing, character of species, and spirit he excelled them all.

Many paintings sold well and the remainder were removed to Gerrard Street, Soho, London, where they were accidentally destroyed by fire on 6 February 1801. William Elmer's claim for £3000 in insurance is an indication of how highly his uncle's work was valued in the eighteenth century.

William Elmer (b. c. 1761), still-life painter, was the nephew of Stephen Elmer. About 1788 he was induced 'by some sporting gentlemen to try the effects of his genius' (Strickland, 1.323), in Ireland, where he lived at 76 Grafton Street, Dublin, and was successful as a painter of still lifes, landscapes, and portraits. On the death of his uncle in 1796 he returned to Farnham. He exhibited at the Royal Academy between 1783 and 1799. A portrait by Stephen Elmer in the Museum of Farnham is thought to represent William Elmer at the age of eleven. A small mezzotint portrait of him as a schoolboy, of 26 June 1772, was engraved by Butler Clowes.