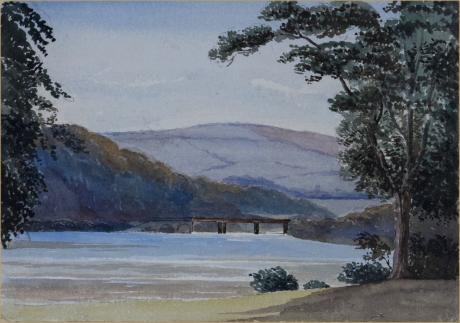 The Border Counties Railway was authorised by Parliament in 1854. The bridge was part of that railway and linked the Newcastle and Carlisle Railway, near Hexham, with the Border Union Railway at Riccarton Junction. The first section of the route was opened between Hexham and Chollerford in 1858, the remainder opening in 1862.

The bridge was beset with problems from its construction when the temporary wooden structure erected initially to allow a crane access, was swept away by floods. The abutments at the south end had to be moved eastwards to avoid scouring of the river at its original site. Both weight and speed restrictions have always been a feature of the bridge. The bridge was reportedly damaged by floods in August 1948 and was given temporary repairs sufficient to keep the line open for a time.

The condition of the bridge was a major factor in the eventual closure of the line, the cost of repairs being considered prohibitive. Regular passenger trains ceased on 13 October 1956 although the line (and the bridge) remained open for goods traffic until 1 September 1958.

The bridge was demolished in 1959.Today, the remains of the piers can still be seen in the river.

HERMITAGE, St John Lee, Hexham NE46 4PB, a seat in St. John-Lee parish, Northumberland; on the river Tyne, in the NW vicinity of Hexham. It took its name from being the retreat of St. John of Beverley; occupies the site of an ancient oratory, which was plundered, in 1138, by the Scots; has in its garden a monumental flagstone to a proprietor, who died in 1655; was itself built in 1724 by the Coatsworths; and is now the seat of Mrs. Allgood.

The Hermitage has for decades slept on undisturbed in a sleepy time warp. When its last surviving tenant passed away in 2013 and the property reverted into the possession of its owners, investigations revealed an untouched world of inter-war Britain, unspoilt by the modern world. The estate itself once belonged to the Priory of Hexham – the land being the reputed site of the 7th century hermitage of St. John of Beverley (a building called the ‘Armytage’ is recorded in 1496). The mansion itself – an 18th century creation with later alterations – belonged to John Hunter Esq., High Sheriff of Northumberland. He died in 1821 leaving two daughters, one of which, Elizabeth, married Robert Lancelot Allgood – the couple taking over the property. It has been in the Allgood family ever since, but in 1922 it was rented out to the Morant family, who remained in residence until 2013. Set in 18 acres with a River Tyne frontage, stable block and outbuildings, it has remained in splendid isolation for the past century.

When its original tenant, Brigadier General Hubert Horatio Morant, died, the property was left to his three children, the last of which, Doreen, died in 2013 – and with there being no succeeding generation the property passed back to the Allgoods. Only then, when the auctioneers moved in to sell the house’s contents, was the amazing ‘frozen world’ uncovered.

The little stately home hadn’t been modernised in decades. There were unopened bottles of wine and champagne from the First World War era, cosmetics and medication from the 1920s and magazines from the 1930s. Little had been thrown out in 90+ years of occupation – some seemingly mundane items being carefully wrapped in newspaper and stashed away in the house’s acres of cupboard and loft space. There were photographs, furniture, paintings, WWI diaries, toys, as well as the estate’s records and accounts. It was an inter-war ephemeral extravaganza – and the whole collection (around 1,500 lots) raised an astonishing £300,000 at auction.

Jurin, James (1684-1750). Medical pioneer. Although born in London, Jurin had connections with the North-East through his mother, a member of the Cotesworth family, and married the daughter of a Morpeth MP. Having served as Head Master at Newcastle’s RGS, he later returned to university to study medicine. He developed the theory of smallpox variolation, a precursor to innoculation, some 50 years before Jenner. Jurin purchased the Hermitage, across the river from Hexham, as a country retreat and it remained in the family for a couple of generations.

ST. JOHN LEE, a parish, in the union of Hexham, S. division of Tindale ward and of Northumberland, 1½ mile (N. N. E.) from Hexham; There are chapels of ease at Bingfield and Wall. This parish is described as an ancient parish - established in the 10th century, although the earliest recorded incumbent is John Del Clay 1311. The church appears to have been built on the site of the oratory dedicated to St Michael referred to by Bede .

On the north side of the Tyne is the Hermitage, which belonged to Hexham priory. It was called Hameshalg i.e. the hamlet in the haugh, haugh or vale. Hodgson is of the opinion that in the 10th century the monks of Hexham converted the oratory on the hill into a parish church, and instead of it and the manse to which St John was wont to retire, built on the haugh below the Hermitage and Chantry - which continued in their possession until their House was dissolved in 1535. The lands were in the hands of the crown in 1568 and have ever since gone by the name of Hermitage.

In 1310 the church is described as Capella bea Johannis de Lega (the chapel of St John in the woods) A document dated 1429 gives the dedication to St John the Baptist. We do not know when the dedication to St John of Beverley was made - what is recorded is that the place was held in such veneration by the monks of Hexham that they visited it annually in high procession - this could have been on Eve of John the Baptist. The name, St John Lee, means St John in the field /clearing in the wood. The area around here was covered with forest - hence the names Acomb (place of the oaks) and Oakwood. The Church has never been a spectacular building - it began, as we know as a small oratory. The present church was built by Dobson in the 19th century with substantial alterations made by the Newcastle architect Hicks in 1886 - at a cost of between £1700 and £1800. The church was widened, the chancel stepped and the spire constructed.