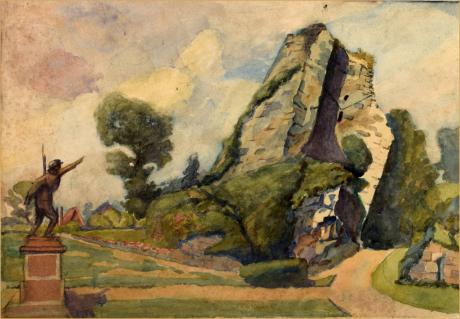 inscribed and signed on the reverse " Bridgnorth Castle / A Vincent Reade "

The castle was founded in 1101 by Robert de Belleme, the son of the French Earl, Roger de Montgomery, who succeeded his father to become the Earl of Shrewsbury. Its principal feature, a square great tower, was built during the reign of Henry II.

During the Civil War, Bridgnorth was one of the Midlands' main Royalist strongholds and in 1642 many Royalist troops were garrisoned there. In 1646, Cromwell’s Roundheads arrived with orders to take Bridgnorth for the Parliamentarians from the garrison led by Sir Robert Howard. Following a three-week siege, Cromwell was successful and he ordered that the castle be demolished. By 1647 little of the structure remained. The Parliamentarians left it much as it is today, the stone from the castle being taken and used to repair the town's damaged buildings.

Parts of the great tower still remain, but because of the damage caused during the Civil War, it now leans at an angle of 15 degrees, 4 times the lean of the leaning tower of Pisa. The castle grounds were excavated over three days by archaeological television programme Time Team, clarifying the layout of the castle and the history of its construction.

The remains of Bridgnoth Castle are set on a cliff by the side of the River Severn. Today the castle is little more than a ruin, comprising of a 70 foot tall, 12th century Norman tower and some other small stonework built in the time of Henry II. The tower leans at an alarming angle of 15 degrees, three times greater than that of the leaning tower of Pisa. This is due to an attempt to blow it up during the Civil War.

The castle was founded in 1101 by Robert de Belleme, who is reputed to have been a very nasty character. He tortured men and women and even is reported to have gouged his godson's eyes out with his bare fingernails. He was the son of the French Earl, Roger de Montgomery, and was also a rich and powerful Norman baron who succeeded his father to become the Earl of Shrewsbury. Belleme let his people build their own houses in the outer bailey of the castle, the evidence of which can still be seen in Bridgnorth's East and West Castle Streets. Belleme supported the Duke of Normandy in his attempts to depose King Henry I and take the thrown of England

During the Civil war, Bridgnorth was one of the Midlands main Royalist strongholds, and was an obvious target for attack by Parliamentarians. In 1102, the Royalists constructed a large earthwork on the south-west side of the Severn Valley, from which they could fire catapults into the castle. Following a three week siege the commander in charge of the castle surrendered to the Royalists who then deported Robert de Belleme back to France. After this the castle became the property of the crown, and subsequently passed through many different hands, resulting in it deteriorating into a very poor state. By the 14th century the castle had lost most of its strategic importance and with the onset of the Black Death in Britain the castle was largely forgotten. By the 15th and 16th centuries the castle had fallen into a ruined state. By 1642 many Royalist troops were garrisoned there. By 1646 Cromwell's roundheads arrived with orders to take Bridgnorth for the Parliamentarians

The Royalist troops retreated to the castle and set fire the houses in Bridgnorth High Street in the hope it would hinder the progress of the roundheads. The fire spread quickly to the surrounding buildings and eventually took St Leonard's Church which was being used as Cromwell's gunpowder store. The engulfing explosion reduced most of Bridgnorth's High Town to burnt cinders. On the 26th April 1646 the town was surrendered to Parliament. Cromwell ordered that the castle be demolished and by 1647 it was left as a few remnants of the structure that had once stood there. The Parliamentarians left it much as it is today, the stone from the castle taken and used to repair the towns damaged buildings.

Bridgnorth's war memorial is dramatic on at least two counts: its location and its subject. The memorial occupies a prominent site in the Castle Gardens - at the cliff's edge, facing out into the void. The plinth is topped by the figure of a soldier in the battle dress of the Shropshire Light Infantry. He carries a rifle over his shoulder and has his arm stretched out as if he has just thrown a hand grenade.The sculptor was Adrian Jones, a Shropshire artist born in Ludlow. After serving as a veterinary officer in the Royal Horse Artillery, Jones became a full-time sculptor. He was responsible for several prominent national pieces including the sculpture Peace descending on the Quadriga of War which stands on top of the Wellington Arch in Hyde Park as a memorial to King Edward VII.

The memorial bears the inscription:

Erected in honour of the men of Bridgnorth who served their country in the Great War 1914-1919 and to the ever glorious memory of those who fell. Also to the memory of those who fell in the Second World War 1939-1945. They whose names are recorded hereon were numbered among those who, at the call of King and Country, left all that was dear to them, endured hardness, faced danger & finally passed out of the sight of men by the path of duty and self-sacrifice, giving up their own lives that others might live in freedom. Let those who come after see to it that they be not forgotten. The names and ranks of 143 persons who died in the Great War and 48 who died in the Second World War are listed. The two panels of names from the Great War are reproduced on a separate page of this website with links to information about the soldiers named. The two panels of names from World War II are shown here:

Meetings began in March 1919 to discuss the erection of a war memorial. Various suggestions were made: a statue bearing the names of the fallen; a large monument on Pan-Pudding Hill; improvements to the hospital and health care in the town; chimes for the Town Hall; a Memorial Hall; oak panelling for the Town Hall.

The statue finally decided on, a site had to be decided. The initial suggestion was the High Street, by Lloyds Bank - but everyone seems to have had their own idea. The site of the existing Whitmore Monument, the top of the North Gate, outside the Post Office. The final site in Castle Gardens seems to have been a late compromise.

The next question was who should be named on the memorial? There was general agreement that only the fallen should be on the memorial itself but that a written Roll of Honour listing all those who had answered the call to arms should be prepared and preserved by the Town Council. 'The Men of Bridgnorth' in whose honour the memorial was to be erected would be defined as 'the men of the parishes of St Mary Magdalene and St Leonards'.

The actual list of names to be inscribed on the monument appears to have been based on that maintained by the Bridgnorth Journal throughout the war. During the years before conscription, the paper had printed details of all those joining up. Full lists were printed at the end of 1914 and 1915 listing all those who had gone to war, street by street. A final list of The Fallen was printed in the issue of 14th August, 1920; with a few late additions, these are the names which appear on the memorial.

The Bridgnorth War Memorial was unveiled at a public ceremony on Thursday, 9th March, 1922. The guest of honour was. Private Eli Jones, a native of Bridgnorth, who served with the Coldstream Guards, and who had the misfortune to lose both his legs, a double amputation each time. Those present were glad to see him with them that day after all he had gone through. He typified the great pain and suffering which had been borne by so many of their brave men.'