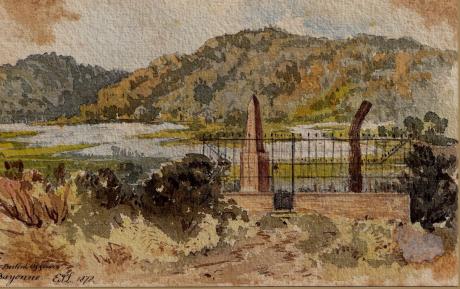 pencil and watercolour
14 x 21.50 cm.
Enquire about this item

The sortie from Bayonne was an unnecessary and costly postscript to the Peninsular war. During the few hours of fighting, (0300hrs - 0800hrs), the Allies lost 838 casualties whilst the French lost 905 men and all this at a time when the war had officially ended. The commander in charge at the Citadel was Governor Thouvenot who refused to believe the news of the fall of Paris and that Napoleon had abdicated on the 9th of April. Thouvenot assembled half of his Garrison to make the assault (around 6000 men, mainly from Abbe’s division). At 3am the French began to move out from the Citadel in three columns, it was a very dark night and the allies were completely surprised.

The right hand column stormed St Etienne and overran the pickets of the 5th division. The allied commander General Hay was in charge this night and he was killed at an early stage whilst trying to hold onto the village church. The only points where the British could maintain themselves were one fortified house defended by a party of the 38th, and the walled Jewish cemetery on the Bordeaux road.

The left hand column, who were advancing to the west of the cross-roads, had similar success whilst the rear column was set to invest any opportunity that the leading columns may present them. Sir John Hope was wounded and captured together with his two A.D.C’s and the second brigade guards commander, Maj - General Stopford, was also wounded. A counter- attack was mounted by Hinuber’s German troops in the east and Maitland’s 1st guards in the west and order was finally re-gained around 0800hrs. Abbe’s troops fell back to the Citadel unaware that, for a short time, the allied line had been cut in half. Hope was apparently captured by a party of the 82nd (Fletcher - gentlemen’s sons). Oman states that the highest casualties on the French side were suffered by the 94th ligne.

The Battle of Bayonne of 14 April 1814 was a sortie by General Thouvenot's French garrison of Bayonne during the siege of that city conducted by Allied forces under Lieutenant General John Hope. The battle was the last of the Peninsular War and occurred as news of Napoleon's abdication (on 4 April) was beginning to reach the opposing forces.

While the Siege of Bayonne was largely illusory, with French and British soldiers fraternizing and exchanging goods and letters, the fighting of 14 April involved heavy hand-to-hand combat in which Lieutenant General Hope was captured with two of his staff, 276 men and a gun. Allied reinforcements however restored the situation and repelled further French attempts before Thouvenot retreated to the citadel with the loss of 910 men.

The siege continued and on 17 April, the main French body under Marshal Soult signed an armistice with Wellington; Thouvenot would continue to resist until direct orders from Soult compelled him to observe the ceasefire. After the Battle of the Nive, the Duke of Wellington mounted a surprise amphibious operation which crossed the Adour River estuary and isolated the French city of Bayonne. Wellington pressed east after Marshal Soult's French army, leaving the fortress to be invested on 27 February by Hope's corps.

Hope conducted the siege in a way that was "leisurely to the point of apathy." On 10 April, the same day that Wellington battled Soult at Toulouse, Hope still had not begun regular siege approaches to the city. For his part, Thouvenot remained passive during the first six weeks his garrison remained besieged.

On 12 April Thouvenot received unofficial news of Napoleon's abdication. Even though this meant that the war was virtually over, the French governor decided to attack "in a fit of spite and frustration." At 3:00 am on the morning of 14 April he attacked the British siege lines with 6,000 men in three columns. A feint attack was made against Anglet and Bellevue, while the main assault which numbered over 3,000 men, was launched northwards from the Citadel. The Allied picquets were taken by surprise and soon overwhelmed. The right-hand column captured the village of St Etienne, where Major-General Hay was killed near the church. The other two French columns broke through, and confusion now reigned amongst the allies. The fight that followed was vicious - Sir John Hope in plain clothes was wounded and captured after he had galloped into a melee.

Major-General Hinuber, who acted on his own initiative rallied the troops round St Etienne. He launched a counter-attack from St. Esprit with the support of two Portuguese battalions, and drove the French out and recaptured the village. At the same time the left-hand French column supported by gunboats on the river, attacked St. Bernard. Colonel Peregrine Maitland of the 1st Guards Brigade however occupied the heights around the village and the convent. With a destructive fire from the Guards the French were repulsed and Maitland ordered a counter attack.

The Allied counterattack soon intensified and the French bridgehead north of the Citadel was now under attack from both east and west. Men of Howard's 1st Division with the bayonet began to dislodge the French emplacements along the crossroads near St Etienne. At this point Thouvenot ordered his troops to withdraw. By 8:00 am the Allies had recovered all lost territory with minimal damage to defences as the siege guns had not been deployed in the battery positions. The French sortie was defeated with heavy losses on both sides. The brunt of the battle was borne by the Anglo-German units, including the 1/1st, 3/1st, 1st Battalion Coldstream and 1/3rd Foot Guards; the 3/1st, 1/9th, 1/38th, 2/47th and 5/60th Foot; the 1st and 2nd King's German Legion (KGL) Light battalions, and 1st, 2nd, and 5th KGL Line battalions.

This was the final battle in the Peninsular War. The Allies lost 838 men, 157 of whom were killed, including Major General Andrew Hay, 455 wounded and 233 captured including Hope. French casualties totalled 905 men, including 111 killed, 778 wounded and 16 missing. Despite the news of Napoleon's abdication, the defence continued obstinately until 27 April when written orders from Marshal Soult finally compelled Thouvenot to hand the fortress of Bayonne over to the British.

In the reign of Edward VII, the King had a monument to the Siege of Bayonne erected near the town.