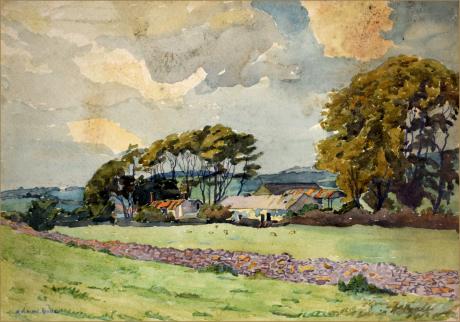 signed "A. Vincent Reade. " and further inscribed dated and signed on the reverse "An Anglesey Farm (Tower Hill) /  Painted from the Bulkeley Monument/ near Beaumaris / Sept 17 /1929 / A Vincent Reade"

Built to commemorate Sir Richard Bulkeley Williams Bulkeley (1801-75), and shown on the 1889 Ordnance Survey. Sir Richard inherited Baron Hill in 1822 from his uncle, the 7th Viscount Bulkeley. He remodelled the house and grounds and, as the dominant landowner in Beaumaris, he initiated much of the town's C19 development as a resort. A tall ashlar obelisk on a broad levelled platform, and a coursed rock-faced plinth with diagonal buttresses. The base is panelled, with inscription on the S side, under a moulded cornice. This impressive obelisk is located on Cremlyn Hill between the village of Llanddona and the town of Beaumaris. The obelisk was built in memory of Sir Richard Bulkeley Williams 1801-1875, although it has no inscription. The obelisk is constructed of stone from nearby Pemmon and was raised through public subscription and cost £1654. It was unveiled on the 1st June 1882.

Beaumaris is a community, and the former county town, of Anglesey, Wales, at the eastern entrance to the Menai Strait, the tidal waterway separating Anglesey from the coast of North Wales. At the 2011 census, its population was 1,938.

Beaumaris was originally a Viking settlement known as Porth y Wygyr ("Port of the Vikings"),[2] but the town itself began its development in 1295 when Edward I of England, having conquered Wales, commissioned the building of Beaumaris Castle as part of a chain of fortifications around the North Wales coast (others include Conwy, Caernarfon and Harlech).

Notable buildings in the town include the castle, a courthouse built in 1614, the 14th-century St Mary's and St Nicholas's Church, Beaumaris Gaol,[3] the 14th-century Tudor Rose (one of the oldest original timber-framed buildings in Britain) and the Bulls Head Inn, built in 1472, which General Thomas Mytton made his headquarters during the "Siege of Beaumaris" during the second English Civil War in 1648. The hill leading north from the town is named Red Hill from the blood spilled in that conflict.