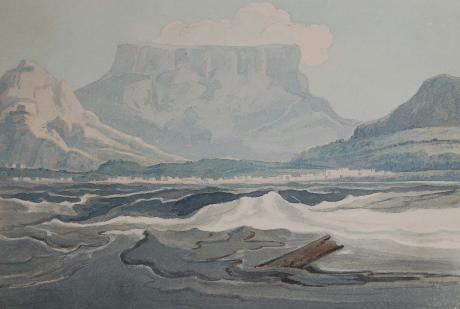 Table Mountain is a flat-topped mountain forming a prominent landmark overlooking the city of Cape Town in South Africa, and is featured in the flag of Cape Town and other local government insignia. It is a significant tourist attraction, with many visitors using the cableway or hiking to the top. The mountain forms part of the Table Mountain National Park. The original name given to the mountain by the first Khoi inhabitants was Hoeri 'kwaggo ("sea mountain").

Prehistoric people first left evidence here more than 600,000 years ago. Evidence tools of these Early Stone Age hunter-gatherers were found in a depression near the Cape of Good Hope. The Middle Stone Age inhabitants (dating from 200,000 to 40,000 years ago) also left evidence of their life on the Peninsula. Fossils from around 8000 BC indicate that by that period the inhabitants of the region had developed bows and arrows which they used to hunt. San (or Bushmen) hunter-gatherers relied on the seashore for most of their food. This resulted in the Dutch naming, Strandlopers (beach combers). About 2000 years ago the Khoikhoi migrated from the north, displacing the San, bringing with them their herds of cattle and sheep. It was the Khoikhoi who were the dominant tribe when the Europeans sailed into Table Bay. António de Saldanha was the first European to land in Table Bay. He climbed the mighty mountain in 1503 and named it 'Table Mountain'. The great cross that the Portuguese navigator carved in the rock of Lion's Head is still traceable. In 1796, during the British occupation of the Cape, Major-General Sir James Craig ordered three blockhouses to be build on Table Mountain: the King's blockhouse, Duke of York blockhouse (later renamed Queen's blockhouse) and the Prince of Wales blockhouse. Two of these are in ruins today, but the King's blockhouse is still in good condition and easily accessible from the Rhodes Memorial.

Between 1896 and 1907, five dams, the Woodhead, Hely-Hutchinson, De Villiers, Alexandria and Victoria reservoirs, were opened on the Back Table to supply Cape Town's water needs. A ropeway ascending from Camps Bay via Kasteelspoort ravine was used to ferry materials and manpower (the anchor points at the old top station can still be seen). There is a well-preserved steam locomotive from this period housed in the Waterworks Museum at the top of the mountain near the Hely-Hutchinson dam. It had been used to haul materials for the dam across the flat top of the mountain. Cape Town's water requirements have since far outpaced the capacity of the dams and they are no longer an important part of the water supply. The mountain became part of the new Cape Peninsula National Park in the 1990s. The park was renamed to the Table Mountain National Park in 1998. Fires are common on the mountain. The most recent major fire came in January 2006, destroying large amounts of vegetation and resulting in the death of a tourist. A charge of arson and culpable homicide was laid against a British man who was suspected of starting the blaze.

Cape Town (Afrikaans: Kaapstad; Xhosa: iKapa) is the second most populous city in South Africa, forming part of the metropolitan municipality of the City of Cape Town. It is the provincial capital of the Western Cape, as well as the legislative capital of South Africa, where the National Parliament and many government offices are located. Cape Town is famous for its harbour as well as its natural setting in the Cape floral kingdom, including such well-known landmarks as Table Mountain and Cape Point. Cape Town is Africas most popular destination for tourism. Located on the shore of Table Bay, Cape Town was originally developed by the Dutch East India Company as a victualling (supply) station for Dutch ships sailing to Eastern Africa, India, and the Far East. Jan van Riebeeck's arrival on 6 April 1652 established the first permanent European settlement in South Africa. Cape Town quickly outgrew its original purpose as the first European outpost at the Castle of Good Hope, becoming the economic and cultural hub of the Cape Colony. Until the Witwatersrand Gold Rush and the development of Johannesburg, Cape Town was the largest city in South Africa.

There is no certainty as to when humans first occupied the area prior to the first visits of Europeans in the 15th century. The earliest known remnants in the region were found at Peers cave in Fish Hoek and date to around 12,000 years ago.[citation needed] Little is known of the history of the region's first residents, since there is no written history from the area before it was first mentioned by Portuguese explorer Bartolomeu Dias in 1486. Vasco da Gama recorded a sighting of the Cape of Good Hope in 1497, and the area did not have regular contact with Europeans until 1652, when the Netherlands' Jan van Riebeeck and other employees of the Dutch East India Company (Dutch: Verenigde Oost-indische Compagnie, VOC) were sent to the Cape to establish a way-station for ships travelling to the Dutch East Indies, and the Redout Duijnhoop (later replaced by the Castle of Good Hope). The city grew slowly during this period, as it was hard to find adequate labour. This labour shortage prompted the city to import slaves from Indonesia and Madagascar. Many of these became ancestors of the first Cape Coloured communities. During the French Revolutionary and Napoleonic wars, the Netherlands was repeatedly occupied by France, and Great Britain moved to take control of Dutch colonies. Britain captured Cape Town in 1795, but the Cape was returned to the Netherlands by treaty in 1803. British forces occupied the Cape again in 1806 following the battle of Bloubergstrand. In the Anglo-Dutch Treaty of 1814, Cape Town was permanently ceded to Britain. It became the capital of the newly formed Cape Colony, whose territory expanded very substantially through the 1800s. The discovery of diamonds in Griqualand West in 1869, and the Witwatersrand Gold Rush in 1886, prompted a flood of immigrants to South Africa.[citation needed] Conflicts between the Boer republics in the interior and the British colonial government resulted in the Second Boer War of 1899-1901, which Britain won. In 1910, Britain established the Union of South Africa, which unified the Cape Colony with the two defeated Boer Republics and the British colony of Natal. Cape Town became the legislative capital of the Union, and later of the Republic of South Africa.