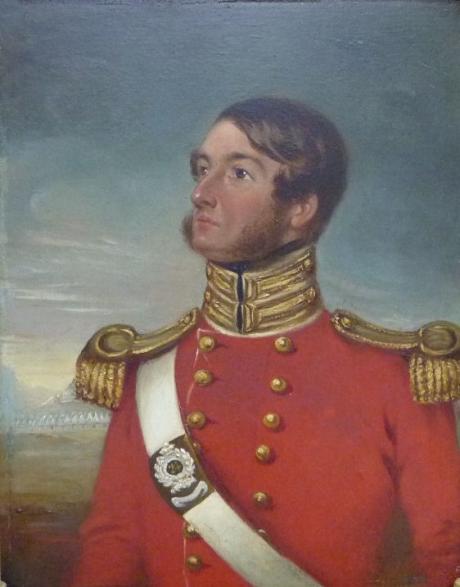 From Hodson Index are the following notes :

The regiment was raised at Nowshera on 1 August 1857 by Lieutenant Charles Henry Brownlow from drafts provided by 4th and 5th Punjab Infantry on the orders of John Lawrence, the British High Commissioner of the Punjab. It was one of several battalions raised by Lawrence to suppress the Great Indian Mutiny of 1857. Brownlow, who became their first commanding officer, remained associated with the regiment for more than half a century; becoming their Honorary Colonel in 1904. He was made a Field Marshal in 1908. The regiment's first overseas service came during the Second Opium War against China. Soon after landing there, it took part in the successful assault on Taku Forts on 21 August 1860. The regiment then advanced with the rest of the British force, arriving at Peking (Beijing) in late September, which was captured on 6 October. In 1861, the regiment was brought into the line as the 24th Regiment of Bengal Native Infantry, replacing the previous 24th which had mutinied in 1857. It was renumbered as the 20th Regiment later in the year.

Westmacott, Sir Richard (1775–1856), sculptor, was born in Grosvenor Square, Westminster, London, on 15 July 1775, the eldest of the thirteen children of the sculptor Richard Westmacott (bap. 1746, d. 1808) and Sarah Vardy (1750–1826), daughter of the furniture carver Thomas Vardy. The journalist and writer Charles Molloy Westmacott (1787/8–1868) was his half-brother. The elder Westmacott worked primarily as a sculptor of chimney-pieces and in 1777 published a series of twenty chimney-piece designs. He also executed about fifty-five church monuments, the best-known examples of which are those to Jane and James Dutton (1791, Devizes, Wiltshire) and Mrs Sarah Shrimpton (c.1783, High Wycombe, Buckinghamshire). At the age of fourteen the younger Richard Westmacott was apprenticed to his grandfather Thomas Vardy. He also probably received some training in his father's studio, though he never acknowledged it. In 1792 he travelled to the continent with his tutor, a sculptor from Carrara known only as Casoni, and studied at the Accademia di San Luca in Rome from 1793 to 1795. In the student competition of 1795 he won first prize for his terracotta relief Joseph Confiding Benjamin to Juda (Accademia di San Luca, Rome). In Rome Westmacott purchased antiquities for the architect Henry Holland and became acquainted with the well-known neo-classical sculptor Antonio Canova. After he returned to London in 1796, he resided at 24 Mount Street, Mayfair, where he lived until 1818, when he moved to 14 South Audley Street. On 20 February 1798 he married Dorothy Margaret Wilkinson (d. 1834), daughter of a Dr Wilkinson of Jamaica, at St George's, Hanover Square. They had eight children, the eldest of whom, also named Richard Westmacott (1799–1872), became a successful sculptor.

Westmacott made his début at the Royal Academy in 1797 with two marble busts, including one of Sir William Chambers (Sir John Soane's Museum, London). He was elected an associate member of the academy in 1805 and became a full academician six years later when he submitted his diploma piece, the relief Ganymede and the Eagle (Royal Academy of Arts, London). In 1827 he succeeded John Flaxman as professor of sculpture at the Royal Academy, a post he held until his death. During his forty-year career he created about 275 works and early on distinguished himself as a leading sculptor of civic and national monuments. He obtained eight of the thirty-six commissions for national monuments ordered by the Committee of Taste from 1803 to 1823. The most remarkable of these is the monument to Sir Ralph Abercromby (1803–9, St Paul's Cathedral, London), a dramatic marble group which established his reputation. George IV commissioned one of his most unusual war memorials, the Waterloo Vase (1820–27, Royal Collection), which was carved from an 18 foot-high block of Carrara marble on which Napoleon had originally intended to represent scenes of his conquest of Russia.

In 1809 Westmacott gained fame for the monument to Francis Russell, the fifth duke of Bedford (Russell Square, London), one of the first large-scale bronzes created in England in the nineteenth century. He helped revive the craft of bronze casting in Britain with such monuments as those erected to Lord Nelson in Birmingham (1806–9) and Bridgetown, Barbados (1810–13); the duke of Wellington (Achilles, 1814–22, Hyde Park, London); George III (1818–22, Liverpool; 1824–31, Windsor Great Park); and the duke of York (1830–34, Carlton House Terrace, London). In addition he produced the colossal bronze group designed by M. C. Wyatt for Lord Nelson in Liverpool (1808–13).

Westmacott's works are generally neo-classical in style, which he sometimes carried to an extreme. His Achilles and memorials to George III are only variations of esteemed Graeco-Roman sculptures. The Achilles unintentionally became his most sensational monument because the idealized nude male figure was commissioned with funds from British women and because some mistakenly believed it portrayed Wellington himself. In his monuments he sometimes tempered his classicizing inclinations with lifelike portraits and contemporary dress. Many of the figures he made for the galleries of private collectors were initially inspired by antique works but overlaid by rococo sentiment or influenced by Canova, notably the Cupid (1823) and Psyche (1822, both Woburn Abbey, Bedfordshire) he made for John Russell, the sixth duke of Bedford, and Cupid Made Prisoner (1827, Petworth House, Sussex) for George O'Brien Wyndham, the third earl of Egremont. Westmacott received an unprecedented £1050 for Psyche, a sum which put him on a par with Canova, who was then considered the greatest sculptor of the day. He departed from classical sources in the series of eight Maltese stone figures (c.1813–18) for the staircase of Ashridge Park, Hertfordshire, which represent the medieval founders and benefactors of a monastery formerly on that site.

Of the 240 marble tomb memorials attributed to Westmacott at least sixty are plain, inscribed, or simply decorated tablets which were largely, if not entirely, executed by studio assistants. Some of his church monuments are among his greatest works. The relief erected to the Hon. John Yorke (c.1801, Wimpole, Cambridgeshire) characterizes his early, short-lived austere style which reflects the impact of John Flaxman's sculpture. Abstract tendencies soften in his mature funerary sculpture. The monument to John William Egerton, the seventh earl of Bridgewater (1825, Little Gaddesden, Hertfordshire) suggests the tender intimacy of Italian Renaissance groups of the Holy Family. Sensual female figures appear in several of his tomb sculptures, notably the graceful entwined angels in the monument to Mrs Elizabeth Eardley-Wilmot (c.1818, Berkswell, Warwickshire) and the charming peasant girl from the monument to Lord and Lady Penryhn (1819, Llandygái, Caernarvonshire). The girl is depicted with a figure of a quarryman, both intended to symbolize the deceased couples' agricultural and industrial improvements on their estate. The monument to Mrs Elizabeth Warren (1824, Westminster Abbey, London) commemorates the wife of the bishop of Bangor as a benefactor of migrant workers. Westmacott portrayed a pathetic group of a destitute young mother and her infant which captivated the public when it was exhibited at the Royal Academy in 1822 under the title The Houseless Traveller. The exhibited version was purchased by the marquess of Lansdowne (Bowood, Wiltshire) and the sentimental image was immortalized in poetry, engravings, and Parian ware reproductions. He later created a companion piece for it, Madonna and Child (exh. RA, 1825; church of the Transfiguration, New York city), popularly known as ‘The Happy Mother’, which did not achieve as much popularity.

Throughout his career Westmacott remained a highly respected member of the British art establishment. He was elected to the Society of Antiquaries in 1811 and the Society of Dilettanti in 1817. In 1816 he was one of the experts who testified before the House of Commons in favour of the purchase of the Elgin marbles. From that time on he served as an unofficial adviser to the British Museum and helped in the display of antiquities, and even recommended purchases. He received the honorary degree of DCL from the University of Oxford on 15 June 1836 and was knighted by Queen Victoria on 19 July 1837. He exhibited at the Royal Academy for the last time in 1839, at the age of sixty-four. His son Richard appears to have taken over his business after that time, but he remained active until shortly before his death. In 1843 he served as one of the judges for the parliament fresco competition and supervised the erection of Nelson's monument in Trafalgar Square in London, and two years later he reported to the government on the condition of the royal tombs in Canterbury Cathedral. He acted as commissioner for the Great Exhibition of 1851, and in 1855 served on the committee for English sculpture at the Universal Exhibition in Paris, where he exhibited The Houseless Traveller and Lady Susan Murray (‘Sleeping Infant’, 1839, Scone Palace, Perthshire). His last documented work, the pediment group for the British Museum, The Progress of Civilization, was installed in 1851. After a brief illness Westmacott died peacefully at his home at 14 South Audley Street, London, on 1 September 1856. He was buried in the churchyard at Chastleton, Oxfordshire, where his son Horatio was rector.

Few details of Westmacott's character and private life are known, in the absence of most of his personal correspondence, contemporary accounts provide only brief glimpses of him. When he applied for family arms in 1829, one of the king of arms is said to have declared, ‘You are an industrious fellow—I'll give you a bee’ (Diary, ed. Pope, 5.390). His arms do in fact feature four bees, appropriate symbols for this vigorous, prolific artist. The diarist Caroline Fox, who visited him in his studio in 1842, described the 67-year-old artist as ‘a man of extreme energy and openness of countenance, real enthusiasm for his art, and earnest to direct its aim as high as heaven’ (Memories, ed. Pym, 2.390). He was a popular member of the Royal Academy and often socialized with other artists, notably Joseph Farington, who mentions him in his Diary on several occasions. Westmacott was on friendly terms with most of his aristocratic patrons. His name appears many times in the ‘Dinner Books’ of Henry Vassal Fox, third Baron Holland, and his wife, Lady Elizabeth Holland. His association with this couple, as well as with Thomas Coke of Norfolk, first earl of Leicester, suggests that he was a whig, as do some of his commissions for John Russell, the sixth duke of Bedford, notably the relief The Progress of Mankind (c.1818) on the temple of liberty at Woburn Abbey. Very little is known about Westmacott's family life, or his children other than his son Richard. His unmarried eldest daughters, Dorothy (b. 1800) and Eliza (b. 1802), cared for him after his wife's death in 1834.

Richard Westmacott's younger brother Thomas Westmacott (1776–1798), architect, was born in Grosvenor Square, Westminster, London. He was a pupil of James Wyatt and exhibited four architectural designs at the Royal Academy between 1796 and 1798. He died on 3 December 1798, only three weeks after he had received the silver medal for architecture.