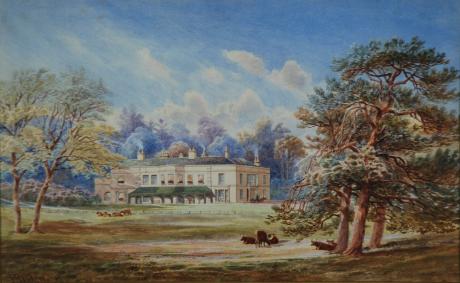 " J Barrett " and further inscribed on the reverse "Chaddlewood - Plympton, in May"

Chaddlewood belonged to the ancient family of Snelling, then by marriage to the Martyn family. It was later divided up and part was owned by the Trevanions. It then passed to Elford Sparke and then in 1789 to William Symons alderman of Plymouth. Chaddlewood House is now apartments.

Chaddlewood House was used after the end of World War II as a prisoner-of-war camp. The Prisoners of War started a choir which joined up with Our Lady of Lourdes Catholic chuch near by and this helped build bridges between the former enemy.

Plympton was a very important town its authority growing in the Tin Mining era, and its marker post bears the words “Plympton Ancient Stannary Town”. There is a saying in the area “Plympton was a Borough Town when Plymouth was a fuzzy down”, this being based on fact.

In its early days Plympton was certainly a very important town and the fertile countryside of Plympton had no fewer than thirteen lesser Domesday manors. They were Baccamoor, Battisford, Bickford Town, Challonsleigh, Elfordleigh, Hemerdon, Holland, Langage, Loughtor Mills, Torridge, Woodford, Walford (lost), and Yealmpstone. Sparkwell appears by 1167, Saltram by 1249, Boringdon by 1279, Newnham by 1292, some of which have been mentioned above.

Plympton St Mary Rural District Council was created by the Local Government Act of 1894 and had within its control the parishes of Brixton, Cornwood, Ermington, Harford, Hemerdon, Holbeton, Ivybridge, Lee Mill, Newton & Noss, Plymstock, Shaugh Prior, Sparkwell and Yealmpton, but all, with the exception of Plymstock, passed to the control of South Hams authority when Plympton was taken into the control of Plymouth City Council.

John Barrett is recorded as a landscape painter who exhibited in the 1880's his address was 8 Stoddon Terrace, Plymouth, Devon. There are various landscapes and cloud studies  in the collection of the Plymouth City Museum and Art Gallery