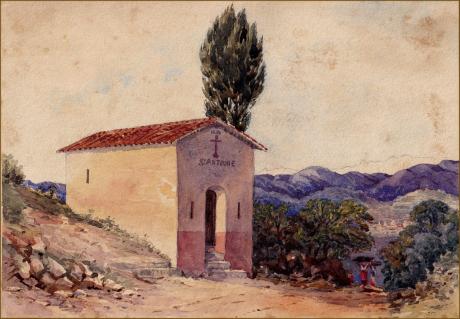 inscribed and dated " Looking towards Valence 1897"

Valence   is a commune in southeastern France, the capital of the Drôme department and within the Auvergne-Rhône-Alpes region. It is situated on the left bank of the Rhône, about 100 kilometres (62 mi) south of Lyon, along the railway line that runs from Paris to Marseille.

It is the 8th largest city in the region by its population, with 63,714 registered inhabitants in 2017 (131,695 inhabitants in the urban area (unité urbaine).[4] The city of Valence is divided into four cantons. Its inhabitants are called Valentinois.

Located in the heart of the Rhone corridor [fr], Valence is often referred to as "the door to the South of France", the local saying à Valence le Midi commence ("at Valence the Midi begins") pays tribute to the city's southern culture. Between Vercors and Provence, its geographical location attracts many tourists. Axes of transport and communications are the A7 and A49 autoroutes, the RN7, Paris/Marseille TGV line, as well as the Rhône. In addition, the Valence agglomeration is equipped with a marina [fr], a trading port [fr], two railway stations (Valence-Ville and Valence-TGV) and an airport. Its business is essentially turned towards the sectors of agriculture, metallurgy, engineering and electronics.

The commune, founded in 121 BC, after the invasion of Gallia Narbonensis by the Romans, it moved quickly to become the largest crossroad behind Lyon. With its growing importance, Valence gained the status of Roman colony. Over the centuries, the town grew and grew. Today, many vestiges of the Middle Ages, Renaissance, but also from the 17th century, 18th century and 19th century are visible in the city centre. The city is historically attached to the Dauphiné, of which it forms the second largest city after Grenoble and is today part of the network of French Towns and Lands of Art and History. Formerly the duchy of Valentinois, it was ruled by the Duke of Valentinois, a title which is still claimed by the Sovereign Prince of Monaco, though he has no actual administrative control over the area.

Monuments in Valence include the Maison des Têtes [fr], built between 1528 and 1532 by Antoine de Dorne, the Saint-Apollinaire Cathedral, built between 1063 and 1099 under the leadership of Bishop Gontard and also the monumental fountain [fr] designed by the architect Eugène Poitoux. The city has many historical monuments [fr], most of which are in Vieux Valence [fr]. Inscribed on the list of flowery towns and villages of France, Valence is one of the seventeen municipalities of the Rhône-Alpes region to be labeled "four flowers" by the Concours des villes et villages fleuris, i.e. the maximum level.