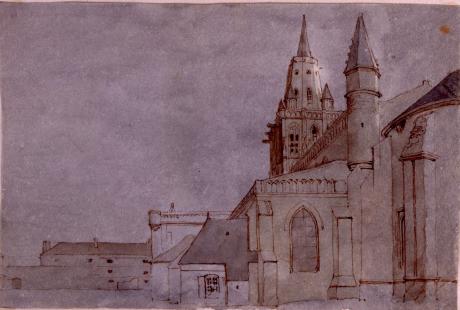 The building as it stands today is the result of several construction campaigns spanning thirteenth and seventeenth centuries. The church derives all its originality of this mixture of styles since it must be the only church in English Perpendicular style yellow brick to exist in continental Europe! Its bell tower stands at the crossroads of the transepts, the nave, very austere, with a date of the XIII century, the heart and transept, Gothic, the fourteenth century. The chapel is Absidiale style, known as the Virgin and was added in 1631, it is classic French style. In 1691, on the north side of the nave, Vauban built a tank used to collect rainwater in anticipation of a siege. Today, the church boasts its celebrity marriage of Captain De Gaulle with Calaisien Vendroux Yvonne in 1921.

The Church is a Roman Catholic parish church located on Rue de la Paix, in Calais, department of Pas-de-Calais, in northern France. Of Tudor architecture, it dates from the 12th century, and chiefly from the 14th century.The church was damaged during the early wars between France and England, especially in 1346-47, after the Battle of Crécy. Many of the kings and queens of France and England prayed here;and John Bourchier, 2nd Baron Berners is buried in the church choir. It was classified as a historical monument on September 13, 1913. Charles de Gaulle and Yvonne Vendroux were married in the church in 1921.

The tower of Notre Dame church was used as an observation point for the Anglo-French Survey (1784–1790), which used trigonometry to calculate the precise distance between the Paris Observatory and the Royal Greenwich Observatory. Cross-channel sightings were made in September and October 1787 of signal lights at Dover Castle and Fairlight Down, and vice versa.

The church is large and has a fortress-like appearance. Its layout is in the shape of a Latin cross. There is a large nave with aisles, north and south transepts, a choir with choir-aisles, and a side chapel. A notable feature is the high altar, mostly completed by 1626, which has carvings and bas-relief. A pedestal and a statue are dated 1628, while two other statues were added in 1629, and the balustrades finished in 1648. Among the works of art is a painting by Peter Paul Rubens of the Descent from the Cross.