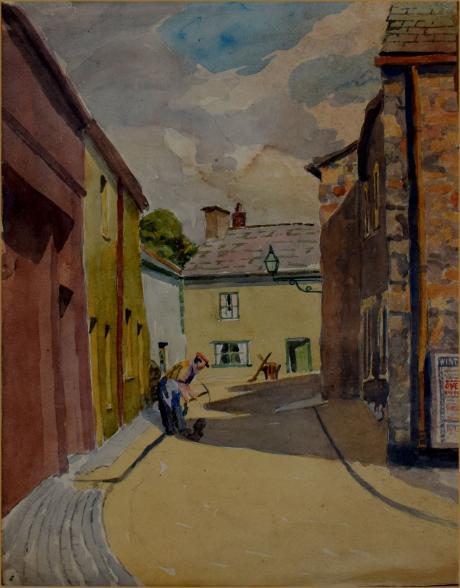 The first use of the name was by John Whitaker in his History of Manchester (1771), when he refers to the æstury of Moricambe. It next appears four years later in Antiquities of Furness, where the bay is described as "the Bay of Morecambe".

That name is derived from the Roman name shown on maps prepared for them by Claudius Ptolemœus (Ptolemy) from his original Greek maps. At this distance in time it is impossible to say if the name was originally derived from an earlier language (e.g. Celtic language) or from Greek. The Latin version describes the fourth inlet north from Wales on the west coast of England as Moriancabris Æsturis. Translated, this gives a more accurate description than the present name of Morecambe Bay as the Latin refers to multiple estuaries on a curved sea, not a bay, as then the word sinus or gulf would have been used.

The name appeared in March 1862 on a steam locomotive built for the South Durham and Lancashire Union Railway, which could indicate it was already in unofficial use for the area.

It was not until 1889 that the necessary legislation was passed to officially name the area Morecambe, comprising the hamlets of Poulton, Bare and Torrisholme (a township for the purposes of the Census of 1841 but shown as separate townships in the previous Census of 1831). In 1894, the Urban District Council was formed, thus freeing Morecambe completely from its governance by the Borough of Lancaster until 1974 when Lancaster again took charge.

Before the creation of Morecambe, Poulton acquired two suffixes, "le Sands" and briefly "on Sands". The reason for these additions stems from the dearth of names of townships in earlier times with the same name recurring over again. In the days before free movement of people, this was not so important. As travel became easier through first the turnpikes and later the railways, it became necessary to differentiate between the various towns with the same name, hence the additions.

On 3 August 1928, the name changed again when the Corporation of Morecambe amalgamated with Heysham Urban District Council to form the Municipal Borough of Morecambe and Heysham.

In 1846, the Morecambe Harbour and Railway Company was formed to build a harbour on Morecambe Bay, close to the fishing village of Poulton-le-Sands and a connecting railway. By 1850, the railway linked to Skipton, Keighley and Bradford in the West Riding of Yorkshire, and a settlement began to grow around the harbour and railway to service the port and as a seaside resort. The settlement expanded to absorb Poulton and the villages of Bare and Torrisholme. The settlement started to be referred to as "Morecambe", possibly after the harbour and railway. In 1889, the new name was officially adopted.

Morecambe was a thriving seaside resort in the mid-20th century. While the resort of Blackpool attracted holiday-makers predominantly from the Lancashire mill towns, Morecambe had more visitors from Yorkshire (due to its railway connection) and Scotland. Mill workers from Bradford and further afield in West Yorkshire would holiday at Morecambe, with some retiring there. This gave Morecambe the nickname "Bradford on Sea". Between 1956 and 1989, it was the home of the Miss Great Britain beauty contest.

Morecambe suffered a decades-long decline after a series of incidents that damaged tourism and the local economy. Two piers were lost: West End Pier was partly washed away in a storm in November 1977, and the remnants were demolished in 1978; Central Pier, damaged by fire in 1933, was removed in 1992. In 1994, The World of Crinkley Bottom attraction in Happy Mount Park closed only thirteen weeks after opening. The ensuing Blobbygate scandal led to a legal battle between Lancaster City Council and TV star Noel Edmonds. The closures of Bubbles, Morecambe's swimming pool, and the Frontierland fairground soon followed.

Concern over the decline of Morecambe's West End led to regeneration and investment in the area. The Times and the Daily Telegraph ran features on Morecambe's revival around Easter 2006. After falling into abeyance in the mid-1980s, the Miss Morecambe beauty contest was revived in 2006 by Margee Ltd, a local fashion store founded in 1933 – the same year that the second Midland Hotel opened.

Morecambe was selected by the RNLI as the location for its first active life-saving hovercraft. (Griffon 470SAR) H-002 "The Hurley Flyer", which became operational on 23 December 2002, was housed in a temporary garage next to the Yacht Club until a permanent building could be designed and built. Work on the latter began in 2008, and it officially opened on 12 June 2010.

On 5 February 2004, there was a major loss of life in Morecambe Bay when Chinese immigrant shellfish harvesters were drowned.

The Yorkshire playwright and author Alan Bennett has enjoyed a long association with Morecambe and has often referred to the town in his work and writing. One of his early TV plays, Sunset Across the Bay (1975), is about a couple from Leeds who retire to Morecambe, leaving their old home with the words "Bye bye, mucky Leeds!". [24] He based the play on memories of the many holidays he spent in Morecambe with his parents. In his essay "Written on the Body", collected in Untold Stories (2005), he even suggests that his association with the town is pre-natal: "[I]t had been in a boarding house that I was conceived, sometime over the August Bank Holiday of 1933 at Morecambe or Filey." In the same collection, Bennett pays tribute to the Morecambe-born actress Thora Hird in the essays "Last of the Sun", about the final play he wrote for her, and "Thora Hird 1911–2003", a memoir of the work they had done together since the 1960s. Earlier in the book, he discusses his maternal Aunt Kathleen, who married in Morecambe and lived there until her death in 1974.

One of Morecambe's most famous landmarks is a statue commemorating one of its most famous sons, Eric Morecambe. It was created by sculptor Graham Ibbeson.

One of Morecambe's landmark buildings is the partially renovated Victoria Pavilion or Morecambe Winter Gardens. This was once a venue for swimming baths, a grand theatre, a restaurant and a ballroom.

Morecambe's current library opened in 1967; it was designed by the office of the architect Roger Booth. It replaced the Victoria Street library, which opened in 1928. There had been earlier proposals to build a library in Morecambe with Carnegie funding, but arguments about the rates involved stalled the project. The library is mentioned by Pevsner and is one of the few noteworthy buildings, other than churches, that are not connected to the seaside trade. The building is formed by hexagons, with a hyperbolic parabolic roof, creating a distinctive skyline and interior.

Morecambe once boasted two fairgrounds: a small one to the north of the railway station, which closed down in the 1980s, and a larger one to the south of the station, which ultimately became Frontierland and closed in 1999. The last remaining landmark on the site was the Polo Tower, left standing only because of the contract for the phone mast on top.[27]. This was demolished mid 2017. The future of the remaining land remains uncertain, although a shopping complex is heavily rumored.

In July 2008, the local council ordered a clean-up of the Polo Tower, and scaffolding was erected around the structure to carry out a survey. It was demolished in sections, in July 2017.

Near the promenade is the Morecambe and Heysham War Memorial which commemorates the men of Morecambe who lost their lives in the two world wars and the Korean War. The memorial differs from most as it lists the First World War as 1914 to 1919 rather than 1914 to 1918.