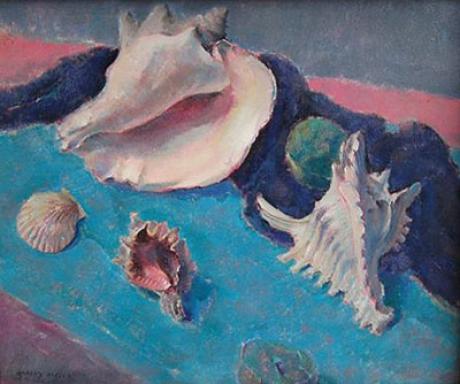 Andrew Healey Hislop (1887-1954) was known as Andrew, but as an artist, he was known as A Healey Hislop.  He taught art and married one of his students, Margaret Ross. A Healey Hislop produced engravings, sketches, including a series of 'people-less views' in Paris. (He didn't paint figures!)   He also painted in watercolour and oil, and was elected President of the Society of Scottish Artists.

His wife, Margaret Hislop RSA, was also an oil painter.

A Healey Hislop was captured, as a civilian in Germany in 1914,  and spent the whole of the World War 1 in Ruhleben Civilian Internment Camp, a Prisoner of War Camp near Berlin.

Facilities at the camp included musical instruments - the camp had an Opera Company - and a printing press.  A Healey Hislop became Art Editor of the camp's magazine.

Andrew Healey Hislop was a Scottish artist who was married to the artist Margaret. They travelled extensively in Sri Lanka (then Ceylon), Egypt and Canada. Throughout their career, the Hislops frequently exhibited still lifes at the Royal Scottish Academy. There were similarities in their styles and that of Anne Redpath who was a close friend and, for a time, neighbour when they both lived in the eastern end of Edinburgh's Georgian New Town at London Street. Hislop however gravitated to a more vibrant use of colour whereas Redpath cultivated a flat, often chalky finish particularly in the best of her still lifes. Their work is to be found in a number of Scottish galleries and in the US and Australia.