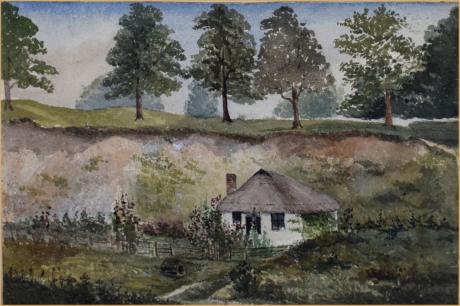 inscribed and dated in the margin " Cottage Near Woolle Firs - 1863 "

pencil and watercolour
17 x 25 cm.
Enquire about this item

Hasker House is the location of the Berks Bucks & Oxon Wildlife Trust. Hasker House, Woolley Firs, Cherry Garden Lane, Maidenhead, Berks, SL6 3LJ. Maidenhead is a large market town in Berkshire, England, on the south-western bank of the River Thames. With an estimated population approaching 68,000, Maidenhead is the largest town in the Royal Borough of Windsor and Maidenhead and fourth largest town in Berkshire. As the crow flies, the town is situated 25.7 miles (41.4 km) west of Charing Cross, London, 11.7 miles (18.8 km) northeast of the county town of Reading, 28.3 miles (45.5 km) southeast of Oxford, 8.0 miles (12.9 km) east-south-east of Henley-on-Thames and 5.8 miles (9.3 km) northwest of Windsor.

The antiquary John Leland claimed that the area around Maidenhead's present town centre was a small Roman settlement called Alaunodunum. He stated that it had all but disappeared by the end of the Roman occupation. Although his source is unknown, there is documented and physical evidence of Roman settlement in the town. There are two well known villa sites in the town, one being in the suburb of Cox Green, and the other just west of the town centre on Castle Hill. This villa sat on the route of the Camlet Way which was a Roman road linking Silchester (Calleva Atrebatum) and Colchester (Camulodunum) via St Albans,(Verulamium) and passes through the present town centre. Remnants of the road have been unearthed at various locations nearby, but its exact route is unclear.

Maidenhead's name stems from the riverside area where the first "New wharf" or "Maiden Hythe" was built, as early as Saxon times. In the year 870, an army of Danes invaded the kingdom of Wessex. They disembarked from their longboats by the wharf and ferry crossing at Maidenhead and fought their way overland to Reading where they set up camp and made it their regional power base. The area of the present town centre was originally a small Anglo-Saxon town known as "South Ellington". The town would have likely developed on the Camlet Way on the site of Alaunodunum as the Bath Road was not re-routed until the 13th century. Maidenhead is recorded in the Domesday Book as the settlement of Ellington in the hundred of Beynhurst.

A wooden bridge was erected across the river in about 1280 to replace the ferry in South Ellington. The Great West Road to Reading, Gloucester and Bristol was diverted over the new bridge. Previously, it had kept to the north bank and crossed the Thames by ford at Cookham, and the medieval town, later to become Maidenhead grew up on the site of Alaunodunum and South Ellington, between the new bridge and the bottom of Castle Hill.[4] Within a few years a new wharf was constructed next to the bridge to replace the old Saxon wharf which needed replacing. At this time, the South Ellington name was dropped with the town becoming known as Maidenhythe. The earliest record of this name change is in the Bray Court manorial rolls of 1296.

The new bridge and wharf led to the growth of medieval Maidenhead as a river port and market town. The market was held outside the old town hall which was set back from the High Street to form the market square. Maidenhead also became the main stopping point for coaches on journeys between London, Gloucester and Bath and the town became populated with numerous inns. By the mid 18th century, Maidenhead had become one of the busiest coaching towns in England with over ninety coaches a day passing through the town. The late 18th-century Bear Hotel on the High Street is the best of the town's old coaching inns surviving to this day.

King Charles I met his children for the last time before his execution in 1649 at the Greyhound Inn on the High Street, the site of which is now a branch of the NatWest Bank. A plaque commemorates their meeting.

When the Great Western Railway came to the town, it began to expand. Muddy roads were replaced and public services were installed. The High Street began to change again, and substantial Victorian red brick architecture began to appear throughout the town. Maidenhead became its own entity in 1894, being split from the civil parishes of both Bray and Cookham.

By Edwardian times, nearby Boulter's Lock became a favoured resort, especially on Ascot Sunday, and Skindles Hotel developed a reputation for illicit liaisons.