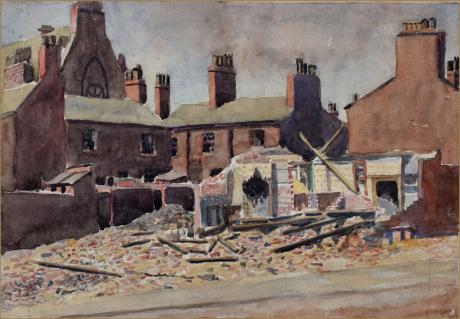 St Thomas School was founded in 1870 and it consisted of 2 buildings. The school catered to Infants, Girls and Boys. St. Thomas's Schools closed for the last time in 1981 and today the buildings are occupied by Photolink who explain that they are, "... an integrated agency specialising in the retail sector. Combining photography, creativity and strategy with commercial common sense we help brands and retailers reach consumers and generate sales. "

By the mid 20th Century, when the industries fell into decline, Ardwick became one of Manchester’s most deprived areas. A massive slum clearance with rehousing of the local people began in the late 1960’s. Fortunately, some buildings escaped demolition, including St Thomas Church (now closed) and the Apollo at Ardwick Green. This famous Art Deco building is still used as a venue for performing artists.

Ardwick is a suburb of Manchester about a mile from the city centre. Ardwick Green, a park of some 5 acres, was established in front of the parish church of St Thomas, complete with fountain and ornamental pond. The park, which was built for the local wealthy residents, exists to the present day. The area was very fashionable in the early 19th Century, and bordered by very elegant regency houses. Surgeons, Solicitors and many a ‘Gentleman’ are recorded in the local parish records.

The population of the Ardwick Ward at the 2011 census was 19,250. Historically in Lancashire, by the mid-19th century Ardwick had grown from being a village into a pleasant and wealthy suburb of Manchester, but by the end of that century it had become heavily industrialised. When its industries later fell into decline then so did Ardwick itself, becoming one of the city's most deprived areas. Substantial development has taken place more recently in Ardwick and other areas of Manchester to reverse the decline, notably the construction of many facilities for the 2002 Commonwealth Games held nearby in Eastlands.

In the late 19th century Ardwick had many places of entertainment, but the only remnant of that history today is the Art Deco-style Manchester Apollo, a venue for pop and rock music concerts. Prior to the Industrial Revolution, Ardwick was a small village just outside Manchester in open countryside. The principal residents were the Birch family, one of whom was a major general when Oliver Cromwell (briefly) instituted direct military rule.

One Samuel Birch was instrumental in providing a small chapel of ease, dedicated to St. Thomas, and consecrated in 1741. This soon expanded into a Georgian church, to which a brick campanile tower was added in the 1830s. It contained a very rare Samuel Green organ, the first in which the sharp keys were distinguished in black. There was also a memorial chapel to the dead of the First World War, chiefly men of the local territorial unit. These have been removed, and the church is now used as offices for voluntary organisations.

Grand terraces of regency houses (some of which still survive) were built either side of the church, and these were fronted by Ardwick Green, a private park for the residents, containing a pond. Similar housing developments to those around the Green took place along Higher Ardwick and the area known as the Polygon.

Early inhabitants included members the family of Sir Robert Peel. Charles Dickens drew many of his characters from life, and was a frequent visitor to Manchester. It is said that Dickens based the character of the crippled Tiny Tim in A Christmas Carol on the invalid son of a friend who owned a cotton mill in Ardwick.

Ardwick Cemetery was established in the 1830s as a prestigious place for fashionable burials. John Dalton, the chemist and physicist best known for his advocacy of atomic theory, is amongst those buried there. The cemetery has since been converted into a school playing field.

During the 19th century, Ardwick became heavily industrialised and it was characterised by factories, railways and rows of back-to-back terraced houses being juxtaposed. Large numbers of Irish immigrants settled here, as they did throughout Manchester. Ardwick railway station is at a junction where the Manchester and Birmingham Railway, later the London and North Western Railway diverged from the line to Sheffield that became the Great Central Railway. Nicholls Hospital, a neo-gothic building that was later a school, was constructed on Hyde Road in the last quarter of the 19th century. More recently it has become the Nicholls Campus of the Manchester College.

The railway bridge across Hyde Road was known by older residents as the "Fenian Arch".[citation needed] On 18 September 1867 it was the scene of an attack upon a prison van carrying two Fenian prisoners to the former Belle Vue gaol (jail). One police officer was shot dead. Three Irishmen involved in the affray were caught, tried and executed. The men are referred to by their supporters as the "Manchester Martyrs".