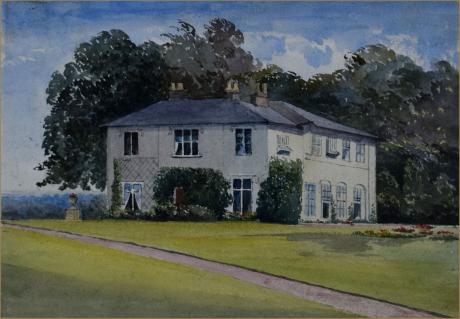 Digswell Rectory is shown on this site on the Norden survey of 1599. The 18th century Rectory is depicted on Dury and Andrews map (1766) which shows a walled garden and a short avenue to the south-west. Digswell Place was part of the wider Digswell landscape and work around the house contains Brownian clumps and parkland planting to the west of Malms Wood, with some other 18th-century planting. After 1804 the landscape was centred around Digswell House where much of the Reptonian-style work was carried out. Jane Brown (Gardens of a Golden Afternoon) has Didswell [sic] Place at Welwyn as a Gertrude Jekyll commission for 1920 but no other evidence has been found. The house was used as a boarding school (known as Conference House) from 1947 to 1954 and is now divided into multiple dwellings.

The wider parkland associated with the house has been divided into paddocks for horses although Malms Wood, Old Wood and Rectory Wood survive from the earlier historic planting. Earthworks showing the former position of the Great North Road (moved in 1830) can be seen. The historic planting belt between Digswell Place and Digswell Park Farm, of monkey puzzle, cedar, ash, thorn, larch, oak and sweet chestnut, survives in part.

The house was formerly the Rectory. It was used as an Australian Auxiliary Hospital in World War 1. It is now converted into multiple use, with stables rebuilt for Riding for the Disabled, and houses built in the immediate approach to the house.

Digswell is an ancient village in the English county of Hertfordshire which is recorded in the 1086 Domesday Book. Its population in the 2011 Census was 1,632. Digswell's name may be derived from Deacon's Well. There were two Manors, with 2 water Mills, much land under plough, and a large area of woodland. Little changed until 1922 when part of the estate once belonging to Lord Cowper of Panshanger was sold at auction, and bought by a group of pioneers of the Garden City Movement including Ebenezer Howard. On this land which included much of the old Parish of Digswell and further acquisitions nearby, was built Welwyn Garden City. The name Digswell is now used to describe an essentially 20th century residential area centred on Welwyn North railway station, on the northern outskirts of the original Parish, but the Church of St John the Evangelist (13th century, much altered) (3) and the 19th century Digswell House built on the site of a much earlier residence still mark the original centre. The impressive Digswell Viaduct built by William Cubitt in 1850 carries the Great Northern Railway over the valley of the River Mimram (River Maran) on some 40 brick arches.[4] The residential workshop for sculptors, artists and musicians sponsored by the Digswell Arts Trust, was once located in Digswell House.[5] Part of the southern Parish Boundary Baulk (raised bank) between the ecclesiastical parishes of Digswell and Hatfield may still be seen in Sherrardspark Wood, a local woodland, nature reserve and Site of Special Scientific Interest.(5) Much of Digswell is now part of the borough of Welwyn and Hatfield.

The present Digswell local residential area centred on Welwyn North station has a population of about 1600, with a shop or two, and a pub called the Cowper Arms. Notable past residents here include Kenneth Allsop, Alan Brazil, Graham Richard James, the police reformer Sir Arthur Young, H.G. Wells and American actor Barry Chapman. When first developed, this residential area was known as "High Welwyn"before later taking on the name of the old parish on the south side of the nearby Hertford Road.