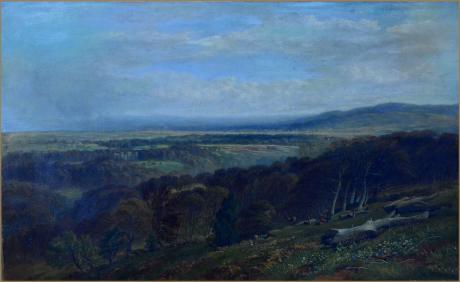 from a descendant of the artist

Downton Castle is a grade I listed 18th-century country house in the parish of Downton on the Rock in Herefordshire, England, situated about 5 miles (8.0 km) west of Ludlow, Shropshire. The south-facing entrance front has a central square tower, six bays to the left terminating in an octagonal tower and five bays to the right flanked by a square tower, the whole resembling a medieval castle with embattled parapets. Pevsner considered the inspiration to be the French semi-fortified houses in paintings by Claude Lorraine or Gaspard Poussin.

It was the Norman baron Ralph de Mortimer, who as part of his reward for helping William the Conqueror defeat the English in 1066, was given Downton. After a mention in the Doomsday Book of 1086 the estate was quietly left to its own devices for the next six centuries until, in 1727, Richard Knight, a successful iron smelter, acquired it. He in turn left it to his grandson Richard Payne Knight, a ‘libertine and freethinker’, who was a founding member of the Picturesque Movement that wished to `improve’ the landscape

The estate of Downton was acquired by Richard Knight (1659–1749) a wealthy ironmaster from Madeley, Shropshire, and proprietor of the Bringewood Ironworks. The Downton Estate is part of the `birthplace of the Industrial Revolution’. It is less than 25 miles from Iron Bridge, the world heritage site where the technique of smelting iron with coke was perfected in the late 18th century. It was at Downton, in the gorge, where over ten percent of the country’s iron, from nails to plough shares, was produced. There were eleven working mills on the Estate and while some remain in a state of disrepair, much of the industrial heritage including the bridges, weirs and mills in the river gorge have been renovated.

The estate passed to his grandson the art connoisseur and MP Richard Payne Knight (1750-1824), who rebuilt the house in the Gothic revival style. Payne Knight was an enthusiast of the picturesque style, and commissioned the landscape artist Thomas Hearne to produce drawings of the grounds. Construction started in 1772/3 and was largely completed by 1778.Knight conceived the idea of building Downton Castle in the gothic revival style and he designed it to complement the wild and irregular scenery of the area, as opposed to reflecting the then fashionable `artificial and tame’ landscapes advocated by the great garden architects Capability Brown and Humphrey Repton. He cut new paths, built a Roman Bath, an Alpine Bridge and a Switchback Tunnel. He also commissioned the English landscape water-colourist Thomas Hearne to paint twelve views of the dramatic Downton Gorge

In 1824 the estate was inherited by the horticulturalist Charlotte Knight (c.1801-1843), niece of Payne Knight, the daughter and heiress of his brother, the botanist Thomas Andrew Knight. She was the wife of Sir William Edward Rouse-Boughton, 2nd and 10th Baronet (1788-1856), of Downton Hall, Stanton Lacy, Shropshire, (about 6 miles (9.7 km) to the NE of Downton Castle), a Member of Parliament for Evesham in Worcestershire. As her eldest son was heir to his father's estates and two baronetcies, she bequeathed the Downton Castle estate to their second son Andrew Rouse-Boughton-Knight (d.1947), who in 1857 adopted the additional surname of Knight. He served as High Sheriff of Herefordshire in 1860 and at that time began improvements and extensions to the house, including a new entrance and porch, a north west tower, and a chapel.[1] He added terraced gardens in 1865 to the design of W.A. Nesfield. In 1881 the family resided there with twelve servants.[4] He died at Downton Castle in 1947.

During the Second World War, pupils from Lancing College, a boarding school on the South Coast, were evacuated to Downton Castle as the school was taken over as a naval training facility, HMS King Alfred. The castle remained in the possession of the Payne-Knight family until 1986 when it was sold along with its 5,000 acre (2,000 hectare) estate to the Primat family, co-heirs to the Schlumberger fortune. It remains a private home and is not open to the public.

Downton Castle and adjoining stable 11.6.59 courtyard GV I Country house and adjoining stable courtyard. Circa 1774-8 by Richard Payne Knight, altered and extended 1860-70. Sandstone ashlar. Roofs con- cealed behind embattled parapets, main ones of which project above prominent corbel tables; others have strings at base; parapets to main south-east front partly have loopholes beneath the merlons (some of which are cruciform in shape). There are groups of ashlar stacks concealed from main elevations. Assymetric plan; the eastern end, the north-west tower, north porch and chapel are C19 additions. Mainly two and three storeys with cellar. Picturesque style. Windows were originally lancets and were replaced in C19 by mullioned windows and traceried lights. Main south elevation (originally the main entrance front): composed of roughly central large square tower which housed the main entrance, to the left of which are two three-bay ranges terminated by a large octagonal tower and to the right of which is a 2:1:2 range, a square tower and a two-bay addition. From left to right: the octagonal tower is of three stages and has a traceried rectangular window with a hoodmould on the lower stage of its south-east face.

The adjoining three-bay range projects slightly and has large ground floor mullion and transom windows with four-centred heads, hoodmoulds and block stops; on the first floor are 2-light traceried windows with hoodmoulds and returns. The next three-bay range is narrower and recessed and has a central ground floor canted bay window with an embattled parapet flanked by inserted double doors; on the first floor is a rectangular traceried window and two mullion and transom windows with hoodmoulds. There is a small turret to the left side of the parapet. The projecting large central tower is of two stages and has the former main entrance which is approached by a flight of steps and flanked by battered buttresses. It has a four-centred arched head of two orders, double doors and a transom light. Above is a corbelled canopy decorated with a central blank shield flanked by loopholes. There are two rectangular lights beneath the parapet which has corner buttresses. The 2:1:2 range to the right has a central slightly projecting small square tower with two ground floor traceried lights which have hoodmoulds with block stops; on the first floor is a semi-circular oriel window; it has a foliated corbelled base, springing from an attached shaft situated between the ground floor windows, and an embattled parapet. On the second floor is a group of three cusped lancets. The flanking ranges have lean-to two-bay arcades with four-centred archways of two orders on the ground floor. within the left arcade is a 2-light window with plate tracery, a mullion and transom window and, between them, a door with a four-centred head. Above on the first floor is a 3-light window with plate tracery and a mullion and transom window. Within the right arcade are three mullion and transom windows and a rectangular light with a traceried head and there are three mullion and transom first floor windows. To the right of this range is a square tower of roughly four stages with a battered plinth in which is set a rectangular light. A string above the lower stage forms a hoodmould above a lancet window and also a 2-light window on the right side. The second stage has an oriel window on three corbels with a hipped roof and there is a loophole on the third stage and a 2-light window on the fourth stage. In the left side is a doorway and in the right angle is a stair turret. To the right of the tower is a two-bay C19 range with ground floor mullion and transom windows with four-centred heads, a 3-light and a 2-light first floor window and a group of three and two cusped lancets on the second floor.

There is a bartisan-style projection at the parapet corner. The main entrance was moved to the north-west side in the C19. It is flanked by two circular three-stage towers and the linking wall has a stepped parapet above a large four-centred arched recess containing a window. The porch is canted, has buttresses with offsets and a blind pointed archway with a blank shield in the central embrasure of the parapet. The entrance archway is of three hollow-chamfered orders, the central one of which is shafted and enriched with rosettes. The stable courtyard adjoins to the north-east and has a hipped slate roof. Two storeys with dentilled eaves cornice with roughly eight bay sides and four bay ends. Windows have cambered heads. At the centre of the north-east side is a square two-stage clocktower with an intermediate two-course band, large four-centred archways on the lower stage and a brick quadripartite vault within. Interior: principal room in south tower is a copy of the Pantheon with a circular, coffered dome and has columns supporting an elaborate entablature and screening niches in the walls containing statues of Coade stone. The drawing room has doors and windows flanked by porphyry columns with white marble capitals and bases and an entablature enriched with a peacock frieze. The fireplaces are of ornately carved white marble, that in the library having porphyry panels deocrated with swags, masks and garlands. Richard Payne Knight was the grandson of Richard Knight of Madeley (1659-1749) the Shropshire iron- master, whose fortune he inherited. At the age of 17 he travelled to Italy and was soon regarded as a scholar and aesthetician of considerable distinction. He built Downton Castle as an early expression of his beliefs in the relation- ship between architecture and landscape, later expounded in his Analytical Enquiry into the Principles of Taste of 1805. His intention was to unite the "different improvements of different ages in the same building" providing an irregular castellated building with a classical interior, and the medieval castle architecture of Wales together with the landscapes of Poussin and Claude Lorraine were probably sources of inspiration. The style and the assymetric plan first emerged in 1717 in Vanbrugh's house at Greenwich and at Walpole's Strawberry Hill begun in 1748, but at Downton these ideas were to achieve their first true expression and inspired the castellated designs of the Picturesque movement for the next fifty years. (Country Life, XLii 60, p 36-42; BoE, p 117-8; Summerson, J: Architecture in Britain 1530-1830, 1970, p 473-5; Beasly, Pauline: A Brief History of the Knight Family, 1958).

Charles Walter Radclyffe (17 January 1817 – 2 February 1903) was a British watercolourist, printmaker and lithographer. The son of artist William Radclyffe (1783–1855), he was elected into the Birmingham Society of Artists in 1846.

Radclyffe was a key part of Birmingham Art Societies, exhibiting 454 works between 1846 and 1902. His work was mostly typographical landscapes and urban scenes, including his works for Perry Hall and Blenheim Palace in the mid-1800s.