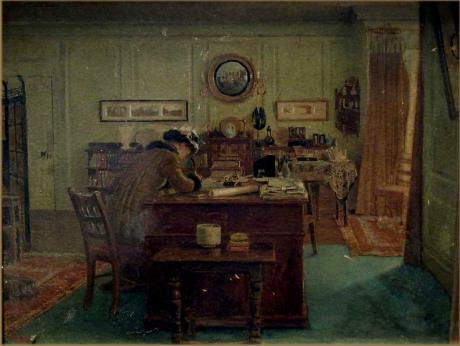 pencil and watercolour
23 x 32 cm..
Enquire about this item

The manor was built for John Higford in 1555.In the nineteenth century, it was acquired by Samuel Gist. In 1962, it was purchased by Charles Hambro, Baron Hambro.

It has been listed Grade II* by English Heritage since 4 July 1960.

The estate of 12 hides in Alderton and Dixton held before the Conquest by Dunning and an unnamed thegn, and after the Conquest held of the king by Humphrey, later became the manor of DIXTON. It was apparently granted by the Crown as part of the honor of Gloucester to Robert FitzHamon, who gave half a hide in Alderton to his new foundation, Tewkesbury Abbey. In 1220 the Earl of Gloucester's bailiff had to answer for 7½ ploughs in Dixton and Alderton, and from the 13th to the 15th century 2 or 2½ knights' fees in Dixton and Alderton were recorded as held of the earls of Gloucester. From the early 15th century Dixton manor was said to be held as of the earl's manor of Tewkesbury; in 1505 the estate was described as the two manors of Dixton and Alderton, of which Dixton was held in chief and Alderton was held as of the manor of Barton by Tewkesbury, but in 1519 it was judicially decided that both were held as of Tewkesbury manor, and this tenure was restated up to the mid-17th century.

John Dixton's wife Margaret, who held jointly with him, died in 1412, and their son and heir Thomas, a minor, in 1413. Thomas's heirs were his sisters, Elizabeth the wife of John Harwell, Maud, and Margery. Between 1419 and 1422 Maud and Margery married Richard Harwell and William Harwell, but in 1438 the advowson was exercised by John Higford in the right of his wife Maud (presumably the same Maud), and Dixton manor afterwards belonged to Higfords until 1795.

John Higford is said to have had a son John, (fn. 91) who may have been the John Higford that presented to Alderton rectory seven times in the fifties and sixties and died in 1482 or 1483, leaving a son Thomas. Thomas died in 1490 or 1491, and another Thomas Higford died holding the manor in 1505. Three sons of this second Thomas inherited in turn, John (d. 1509), Anthony (d. 1513), and William. William, the only one to survive his nonage, was succeeded in 1545 by his son John. This John, who rebuilt Dixton manor-house, was knighted by Elizabeth I, and was sheriff of the county, died in 1607, and his son and heir, also John, died in 1612, to be succeeded by his son William Higford, the puritan and author of the Institutions, or advice to his grandson. William was succeeded at his death in 1657 by that grandson, John Higford, son of John (d. 1635).

John Higford died in 1703, and Dixton manor passed, apparently, to three of his sons in turn, James, Henry (who presented to the rectory in 1717), and William, who died in 1733. William was succeeded by his son William, and this second William, in 1770, by his half-brother Henry, Rector of Alderton, who dying in 1795 without children was the last Higford in the male line to hold Dixton manor. The manor passed to the descendants of James Higford (d. 1742), brother of the last-named William Higford: they were John Parsons of Dixton, son of James's daughter Agnes, and members of the Davis family of Chepstow, grandchildren of James's daughter Anne.

In the early 19th century the estate was split up and sold, and Samuel Gist, who was lord of the manor in 1807, acquired over 500 a. in Dixton and the manor-house there which passed to Samuel Gist Gist, of Wormington Grange, perhaps his nephew. Samuel Gist Gist died in 1845 and was succeeded by his son Samuel Gist, who was of unsound mind in 1883 and 1898. H. W. Gist, Samuel Gist's nephew, was described as lord of the manor in the early 20th century, but in 1911 Dixton Manor with the land by the house was sold to the lessee, Col. C. H. Leveson, most of the farm-land being severed from it. In 1939 Mrs. Wallace bought the manor-house, and in 1945 sold it to Sir Charles Hambro, K.B.E., the owner in 1962.

Producing landscapes and other subjects in watercolour and oil, Harry Goodwin worked in a style that is similar to that of his younger brother, Albert, though with a distinctive lightness and sense of space.

Harry Goodwin was born in Maidstone, Kent, the sixth surviving child of the builder, Samuel Goodwin, and his wife, Rosetta (née Smith). The family were devout Baptists and worshipped at Bethel Chapel, Union Street, where the organist was Samuel’s brother, Thomas, an organ builder. By the age of 18, Goodwin was also working as an organ builder, probably with his uncle.

It is not known whether Harry Goodwin had professional artistic training, though he grew up among talented siblings and, given the similarities in their styles, is likely to have received lessons from his younger brother, Albert. He began to exhibit at principal galleries in London in 1867, while still living in Maidstone in the family home. These included the Royal Academy of Arts, the Society of British Artists and the New Society of Painters in Water Colours.