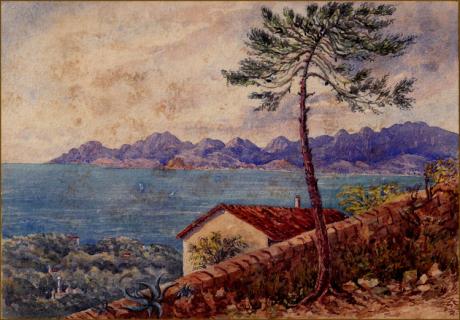 inscribed and dated on the mount " The Esterelles from Cannes/1897."

The Massif de l'Esterel Occitan Provençal: Esterèu; English: Esterel Massif is a Mediterranean coastal mountain range in the departments of Var and Alpes-Maritimes on the French Riviera. Neighbouring cities are Mandelieu-la-Napoule and Cannes on the east, as well as Saint-Raphaël and Fréjus on the west. The soil and rocks of the range are of volcanic origin, composed mainly of rhyolite, which gives the hills a red color. The terrain is rugged, with deep ravines and oak forests. The highest point of the massif is Mont Vinaigre (618 metres or 2,028 feet).

The massif covers an area of 320 km² (123.5 sqmi), of which 130 km² (50.1 sqmi) are protected by the Forêt domaniale de l'Esterel (national forest). The nature reserve offers hiking and mountain biking trails including the GR 49 and GR 51. The Esterel mountains also host the Pierre & Vacances holiday village Cap Esterel. The Corniche d'Or, a touristic road along the coast and Île d'Or, links Saint-Raphaël and Cannes.

By the 2nd century BC, the Ligurian Oxybii established a settlement here known as Aegitna (Ancient Greek: Αἴγιτνα). Historians are unsure what the name means. The area was a fishing village used as a port of call between the Lérins Islands.

In 154 BC, it became the scene of violent but quick conflict between the troops of Quintus Opimius and the Oxybii.

In the 10th century, the town was known as Canua. The name may derive from "canna", a reed. Canua was probably the site of a small Ligurian port, and later a Roman outpost on Le Suquet hill, suggested by Roman tombs discovered here. Le Suquet housed an 11th-century tower, which overlooked swamps where the city now stands. Most of the ancient activity, especially protection, was on the Lérins Islands, and the history of Cannes is closely tied to the history of the islands.

An attack by the Saracens in 891, who remained until the end of the 10th century, devastated the country around Canua. The insecurity of the Lérins islands forced the monks to settle on the mainland, at the Suquet. Construction of a castle in 1035 fortified the city by then known as Cannes, and at the end of the 11th century construction was started on two towers on the Lérins islands. One took a century to build.

Around 1530, Cannes detached from the monks who had controlled the city for hundreds of years and became independent.

During the 18th century, both the Spanish and British tried to gain control of the Lérins Islands but were chased away by the French. The islands were later controlled by many, such as Jean-Honoré Alziary and the Bishop of Fréjus. They had many different purposes: at the end of the 19th century, one served as hospital for soldiers wounded in the Crimean War.

At the end of the 19th century, several railways were completed, which prompted the arrival of streetcars. In Cannes, projects such as the Boulevard Carnot and the rue d'Antibes were carried out. After the closure of the Casino des Fleurs (hôtel Gallia), a luxury establishment was built for the rich winter clientele, the Casino Municipal next to the pier Albert-Edouard. This casino was demolished and replaced by the new Palace in 1979.

In the 20th century, new luxury hotels such as the Carlton, Majestic, Martinez, and JW Marriott Cannes were built. The city was modernised with a sports centre, a post office, and schools. There were fewer British and German tourists after the First World War, but more Americans. Winter tourism gave way to summer tourism, and the summer casino at the Palm Beach was constructed.

The city council had the idea of starting an international film festival shortly after World War II.