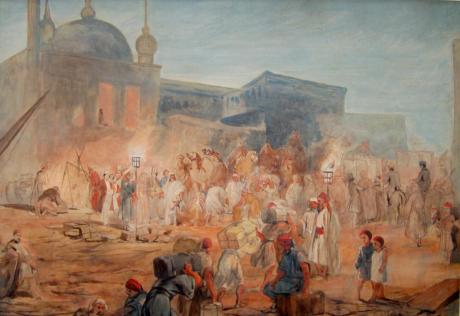 This watercolour relates to Simpsons travels in Abyssinia . Th watercolour depicts a scene of embarkation and disembarkation at the Wharf of Port Faud (now part of Port Said.), showing European travellers amongst Egyptians. The Autobiography of William Simpson R.I. (Published by T. Fisher Unwin 1903) describes (at page 184 to 186) Simpson's travels in 1868 to join General Napier's expedition to Abyssinia to rescue the hostages being held by Emperor Teodorus. He travelled to Alexandria and then on to Suez where he hoped to catch a ship to Zoula (Annesley Bay) on the Red Sea coast to link up with Napier's expedtion. At Suez (ie. Port Said): "... I had some uncertainty as to whether I should reach Zoula ... from Suez or from Aden sooner. I thought I could discover this at Suez, but on arriving at the station there the passengers were informed that they would only be allowed fifteen minutes at the hotel. That seemed to me a mauvais quart d'heure. How was I to find out in fifteen minutes which plan to follow - to wait in Suez or go on with the steamer to Aden? If there were no steamers to Zoula from Suez and I missed the one just about to sail, I should lose a week of precious time. I made for the hotel in hopes that some one there could give me the necessary information. As I pushed along, I noticed an Arab with some luggage on his back, and my eye caught the word "Abyssinia" upon it. I noticed what I took to be the owner of the property walking before the Arab. I explained who I was, and the fix I was in for the moment, so he said, "Wait here, there is a transport sailing for Zoula on Monday (this was on Saturday), and I am going with her." What a relief this was to my anxious mind! It is at such moments that the special correspondent is tried, and it is often merely a question of turning to the right or to the left. Here it was, Shall I go on or wait? But it is on such slight chances that the seeing events or missing them depends. "My new friend turned out to be Captain Arbuthnot, of Sir Robert Napier's staff. He had been to Egypt about mules, that animal having assumed a great importance in connection with the transport department in Abyssinia." Simpson had two days to kill at Port Said while he waited for the boat to Zoula, and it is possible that he took the opportunity to sketch the activities in the port area while he waited.