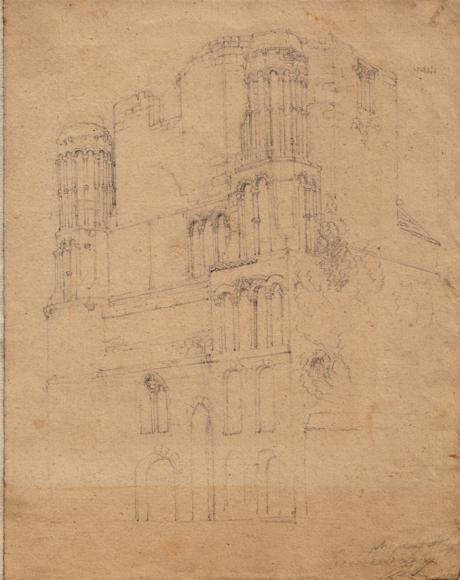 The Abbey was established in 1093 by the Norman monkbishop Gundulf as one of the first communities for nuns in England. Gundulf, who had come from Bec Abbey in Normandy following the Norman Conquest, is perhaps best known for building the White Tower at the Tower of London and Rochester Cathedral. While much of the original Abbey at Malling is gone, the first two stories of the Norman tower remain (with early English upper stories). Richard drew our attention to the similarities between this and the West front of Rochester. Some remnants of the original church are attached to the tower, and the refectory is still standing. In the 13th century a Pilgrim Chapel was built and is still there at the North end of the gatehouse which was built in the late 15th century and is now Richard’s home. The current cloisters, while on the site of the originals, were erected in the 14th century.  Gundulf remained Abbot of Malling until his death in 1108; his tomb is in Rochester Cathedral. At the time the Abbey community comprised 13 nuns who followed the rules for monastic life set down by St Benedict some 600 years earlier. They were strictly enclosed. Their life comprised study, manual work and prayer and their days were long, starting with Matins at 2am and ending with Compline at 8pm. For much of the day they were silent. While for most the manual work was gardening and domestic tasks, for the cleverer nuns it included illuminating manuscripts. The system began to collapse towards the end of the 13th century. Novices entered the order without a vocation, learning fell away and manual work was seen as undignified. The only surviving records of that time are of misdemeanours, including the striking of the Abbess by one Agnes Purton. The Archbishop of Canterbury, the Abbey’s Visitor , complained in 1299 of their management and conduct, citing begging, bribery, breaking silence, laughter, expensive clothing, consumption of too much meat and fish and contact with men! Misbehaving nuns were separated from the rest. In 1321 the nuns complained to King Edward 11 about their Abbess, who was replaced, but her successors were also unsatisfactory, one of them having her seal of office confiscated for selling off rights, and breaking enclosure was a frequent problem. In 1349 came the Black Death; the Abbess and seven other nuns died and eventually only four nuns and four novices remained. While little is known of the Abbey and its community thereafter until the dissolution of the monasteries, it clearly became a wealthy. The Abbess was the main lawgiver and landlord for the area, boasting not only her own prison but also a pillory, stocks and a ducking stool. But the wealth and power were not to last. Attracted by both, on 28 October 1538 two agents of the Crown seized the Abbey Seal and signed the Deed of Surrender. This should also have been signed by the Abbess but, while monks displaced from monasteries could carry on as priests, nuns had no work and were condemned to a life of virtual poverty, an Abbess receiving an annual pension of £40 and junior nuns £2.13s.4d. It was not surprising then that neither the Abbess nor any of Malling’s nuns would sign the Deed! For the next 300 years the Abbey had a succession of private owners and the buildings fell into disrepair. A 16th century engraving shows stones being removed for use in other construction. Some restoration of the remaining mediaeval fabric was done in the mid-1700s by Fraser Honeywood, a London banker who built a house there which is still standing. In 1850 the Akers family bought the Abbey for £3,600 who sold off much of the associated land to fund the Abbey’s restoration. Aritas Akers died in 1856 - the Pilgrim Chapel has since been restored in his memory. At the time the Oxford movement was encouraging the restoration of religious life in the Anglican Church and Charlotte Boyd, a friend of Aritas’ widow Isabel, set up a Trust for the Abbey. When Isabel died the Trust bought the Abbey and in 1893 Boyd invited a small Anglican Benedictine community from Twickenham to transfer to Malling. Once more the Abbey was serving its original purpose. However, in 1911 three of the nuns and Charlotte herself joined the Roman Catholic Church and, as the Malling Trust stipulated that the Abbey must be for Anglican communities only, all had to leave. They were replaced in 1916 by another Anglican Benedictine community comprising 14 nuns, three novices, two postulants and a chaplain who moved in from Glastonbury. Since then much work has been done at the Abbey including construction of a new residential block in 1935. The cloisters were restored and, while worship is still conducted in the remnants of the original South transept, a new church was built in the crossing of the original in 1966. The nuns still follow the traditional Benedictine life with its seven daily offices but are no longer enclosed and welcome many outsiders to their guesthouse and on daily visits. Richard noted that shortly some Iffley residents will be going there on retreat. Recent eminent guests have included the former Archbishop of Canterbury Rowan Williams, the Patriarch of Georgia and Cardinal Koch from the Vatican. A very special visit was made in 2008 by the Abbot of Bec, to mark the 900th anniversary of the death of Gundulf. The Abbey is also now home to a Pilsdon community, a lay organisation offering the chance to re-establish a settled life for those recovering from addiction or other problems which make independent living difficult. The current Abbess is Mother Mary John who, some may remember, visited Iffley several years ago.

The manor of West Malling was given by King Edmund I to Burgric (or Burhic), Bishop of Rochester, in 946. The land was lost to the church in the Danish Wars but was restored to the diocese in 1076. About 1090, Gundulf, Bishop of Rochester and monk of Bec Abbey in Normandy, chose Malling as the site of his foundation for a community of Benedictine nuns, one of the first post-Conquest monasteries for women. Just before his death in 1108, Gundulf appointed the French nun Avicia as the first abbess.

Gundulf had endowed the community with the manor of Malling and Archbishop Anselm had given the manor of East Malling. Royal grants gave the nuns the rights to weekly markets and annual fairs as well as wood-cutting and pasturage rights in nearby royal forests. Bequests and gifts also added to the community’s income.

As the abbey prospered, West Malling became a flourishing market town. In the four-and-a-half centuries of Benedictine life at the abbey, major events included a fire in 1190 which destroyed much of the abbey and town, the Black Death in 1349 which reduced the community to four nuns and four novices, and the surrender of Malling to the Crown on 28 October 1538 during the Dissolution of the Monasteries.

The last elected abbess, Elizabeth Rede, had been deposed when she defied both Henry VIII and Thomas Cranmer over the appointment of a high steward for the abbey. Margaret Vernon, who had been tutor to Cranmer’s son, and had already surrendered Little Marlow Priory, was appointed Abbess of Malling in her place. On 28 October 1538, two agents of the Crown seized the abbey seal and signed the deed of surrender, but apparently were unable to persuade a single nun to sign.

Immediately before the Dissolution, Malling Abbey had an annual income of £245, placing it among the wealthiest third of women’s communities in England. With its outlying lands, its Norman church, Early English cloister, early 15th century guest house and two early 16th century gatehouses, it was a rich prize for the Crown. During the 350 years that followed, the abbey was owned by many families, most being absentee owners.

The buildings fell into ruin until the mid-1700s when Frazer Honeywood, a London banker, built a neo-gothic mansion and repaired the remaining medieval fabric. In 1892, the property was purchased by Charlotte Boyd whose life’s work it was to create a trust to restore church property to its original use. She invited a small Anglican Benedictine community, the Community of Saints Mary and Scholastica, to settle at the abbey.

This community had been founded by Fr Ignatius of Llanthony (Joseph Leycester Lyne) but had become independent of his rule in 1879, with Mother Hilda Stewart OSB as their abbess - the first Anglican Benedictine abbess since the English Reformation. This community left Malling Abbey in 1911, joined the Roman Catholic Church in 1913 and now resides at Curzon Park, Chester.

The Anglican Benedictine community of nuns that has made its home at Malling Abbey since 1916 was founded in 1891 as an active parish sisterhood. The sisters worked among the poor in Edmonton, north London, until they became attracted to the Benedictine contemplative life through the preaching of Abbot Aelred Carlyle. In 1906, they moved to a farmhouse in Baltonsborough, a remote village in Somerset, to begin their enclosed monastic life under Benedictine vows. In 1916, the trustees of Malling Abbey invited them to move to the more spacious and historic abbey and to continue its tradition of Benedictine prayer, worship, work, study and hospitality.

Little of the original building is now standing; the tower is Norman up to the first two storeys and Early English above. Attached to the tower are some remnants of the church, one of the transepts and a wall of the nave; the refectory is also standing. The cloisters were re-erected in the fourteenth century. There is also a Grade II* 1966 abbey church which is used by the community.

With thanks to Julian Munby for identifying this drawing.