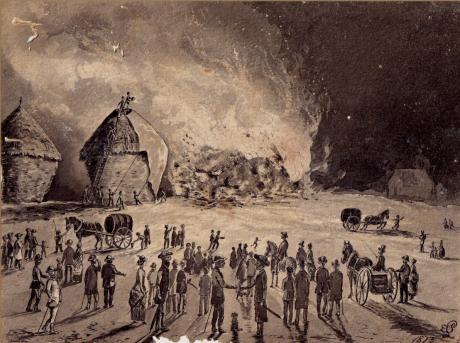 extensively inscribed and dated on the reverse " The Fire New Hithe Kent 19th Dec 1873. / A good many of the neighbours arrived athe t the fire willing to help but little could be done from scarcity of water ; except/ to save the adjoining stacks. The glare was seen from miles around.

And further signed with monogram and dated "1873"

New Hythe is a village in mid-Kent, England on the banks of the River Medway approximately 5 miles northwest of the county town of Maidstone. It derives its name from the Old English word Hythe, meaning haven or landing place.

During the 20th century it held a relatively prominent position in the local economy due to having its own railway station and a large paper mill based there. The mill was one of Europe's largest, but in 2009 was reported to be on the brink of closure.

It was also the home to Meridian's newsroom and studio for the south eastern television region until 2004 when the station relocated its Kent operations to the Maidstone Studios in Vinters Park, Maidstone, the former home of the previous southern ITV franchise holder TVS.

Once distinct and visibly separate from its surrounding villages, the large scale development of neighbouring Larkfield from the 1960s onwards, the building of Lunsford Park in the 1970s and 1980s, and most recently the development of the Leybourne Lakes area, has seen New Hythe become effectively subsumed into the general Larkfield conurbation.