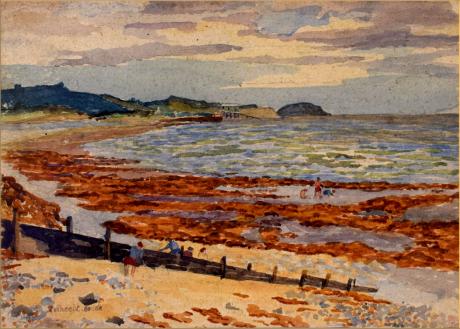 The lifeboat house and deepwater roller-slipway seen in the distance was constructed in Friars Bay in 1914, to house the Frederick Kitchin Lifeboat. The Frederick Kitchin was built in 1908 at a cost of £3,727 and was the first Motor Lifeboat for Beaumaris. She was on service in Beaumaris 1914-1945. Friars Bay is a beach of sand and shingle backed by a small sea wall, behind which is the B5109 from Beaumaris. It faces onto the Menai Strait, and has views across the strait to the mountains of Snowdonia.

Friars Bay related to Llanfaes Friary was a Franciscan friary in the now vanished medieval town of Llanfaes, close to what is now Beaumaris, in south east Anglesey, Wales. It was founded around 1237 in memory of Joan, wife of Llywelyn ab Iorwerth. The Friary survived the depopulation of the town, but was dissolved in 1538 and most of the buildings dismantled soon afterwards. The land became an estate on which, in 1623, Rowland Whyte built a house which he called Friars. It became one of the many properties of the Bulkeley family, and was substantially rebuilt in 1866. By the 20th century the house and grounds were owned by James Hartley Burton. In 1939 they were requisitioned for wartime use, adapting and repairing flying boats, by Saunders-Roe, who continued after the war with a wide variety of light engineering activities. The industrial uses finally came to an end in the late 1990s. An archaeological dig on the site in 1991 identified substantial buried remains of the friary church and other monastic buildings. The site is a Scheduled monument.

In 1939 the 50 acre Fryars estate was requisitioned from the Burton family, for use in the war effort. The site was allocated to Saunders-Roe, who used it for modifying American and Canadian built Catalina flying boats. Over four years 399 Catalinas received a wide range of adaptations to fit in with RAF needs, including .303 British version Browning machine guns, British type bomb-racks and RAF radio equipment. They also installed highly secret Air-to-Surface Vessel radar (ASV) and from 1942, Leigh lights. German U-boats had to spend time on the surface at night, while they re-charged their batteries. The combination of radar and the high powered searchlights enabled the planes to find and attack a U-boat before it could dive.

At Llanfaes, a long slipway was built across the road and across the foreshore to Fryars Bay. The flying boats were able to utilise the large area of deep water along the east end of the Menai Straits. The Catalinas were manufactured in USA and Canada, and were initially sent over on cargo ships, but from November 1942 they were able to be flown over direct from either Bermuda or CFB Goose Bay, Canada. One of the survivals from this time is a large concrete turning circle, just south of Fryars House, used when setting aircraft compasses. After the war the factory diversified into a wide range of engineering tasks. Some aircraft activity continued, such as trialing floats for Auster light aircraft, and a pioneering use of aluminium in the manufacture of motor torpedo boats P1602, Dark-class fast patrol boats, Bras d'Or (R-103) Hydrofoils and Airborne lifeboats. They also produced a wide variety of civilian and military land based craft, such as the coachwork for buses. 620 of these buses were exported to Cuba in the 1950s. At its height over 2,000 people worked at the site. Fryars House became the offices. In the war, workers were housed in nearby Henllys Hall, Plas Rhianfa (now Chateau Rhianfa Hotel and in prefabricated housing. This was gradually replaced by permanent houses such that a new village of Llanfaes has grown up north of the factory site.

In 1968 the Llanfaes SARO site, along with an engineering works in Llangefni were merged as part of the Cammell Laird shipbuilding firm, to become Laird (Anglesey). By the 1990s this had become owned by Faun Group, who in 1997 opened a new works in Llangefni and the decaying wartime hangars and buildings finally fell into disuse.[25] Aluminium construction still remains the core activity of the firm at Llangefni, but the Llanfaes site is no longer in use.

FREDERICK KITCHEN was built by he Thames Ironworks of London in 1908 at a cost of £3,727 and is one of only five 43' x 12'6" Watson class boats. She was driven by a single 60hp Taylor petrol engine, which gave her a top speed of seven and a half knots. She is of double diagonal construction with a Honduras Mahogany hull.

On 6 August 1913, while she was on passage along the south coast, the vessel called in at Cowes during the Regatta Week. King George V took a short trip in the new lifeboat.

Completion of the slipway at Friar's Bay, Beaumaris in Anglesea was delayed by constructional problems and the new lifeboat did not arrive at her station until July 1914. The vessel, which was provided out of a legacy of Mrs Kitchen of Caernarfon was named the FREDERICK KITCHEN by Mrs Burton, wife of the station's Honorary Secretary. She became the first motorboat to be stationed at Beaumaris and served there from 1914 to 1945.

Thereafter she was sold in 1948, had a cabin added and was renamed several times. In 1950 she was renamed Lady Pat and later Jackie Maxwell.

In 1997 she was restored at a boatyard in Blyth, Northumberland with a view to becoming a fishing vessel, under a new name, the Herring Queen.

She changed hands again in 2004 and was renamed Ballyheo Dream. The new owners traced original fittings and extended the cabin to allow her to be lived on. Sadly, in August 200, she sank and was towed back to Blyth, but was quickly refloated and partially restored again.

She was sold in 2007 and moved to Manchester for restoration, but the new owner suffered setbacks and FREDERICK KITCHEN was placed for sale. Eventually she ended up at the Fish and Duck Marina in Ely, where in 2013 the Thames Ironworks Heritage Trust became owners of the vessel. They aim to move her back to East London, very close to where she was built over 100 years ago, for restoration to her original livery.