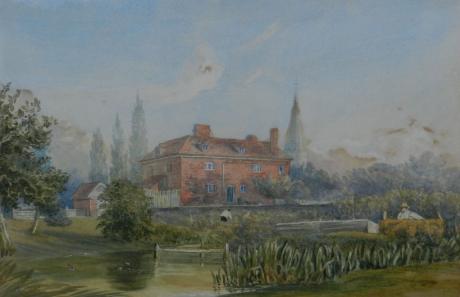 John Preston Neale (1780–1847) was an English architectural and landscape draughtsman. Much of his work was drawn, although he produced the occasional watercolour or oil painting. His drawings were used on a regular basis by engravers. A major work, the Views of the seats, Mansions, Castles, etc. of Noblemen and Gentlemen in England, Wales, Scotland and Ireland was published in 6 volumes between 1819-23. In 1797 Neale exhibited at the Royal Academy two drawings of insects, and sent others in 1799, 1801, and 1803. In 1804 he sent to the Royal Academy a drawing of the Custom House, Dover, and continued to exhibit topographical drawings and landscapes until 1844. He contributed also to the exhibitions of the Society of Painters in Oil and Water Colours in 1817 and 1818, and from time to time to those of the British Institution and of the Society of British Artists. Some of his works were in oil-colours; but he is best known for his architectural drawings, which are executed in pen and tinted with water-colours. In 1816 he began the publication of the History and Antiquities of the Abbey Church of St Peter, Westminster which was completed in 1823, in two quarto volumes, with descriptive text by Edward Wedlake Brayley. He next began, in 1818, his Views of the Seats of Noblemen and Gentlemen in England, Wales, Scotland, and Ireland, of which the first series, in six volumes, was completed in 1824. The second series, in five volumes, was published between 1824 and 1829, and the entire work comprised 732 plates. He also in 1824–5 undertook, in collaboration with John Le Keux, the engraver, the publication of Views of the most interesting Collegiate and Parochial Churches in Great Britain, but the work was discontinued after the issue of the second volume. Besides these works he published Six Views of Blenheim, Oxfordshire, (1823); Graphical Illustrations of Fonthill Abbey, (1824); and An Account of the Deep-Dene in Surrey, the seat of Thomas Hope, Esq., (1826). Many other works contain his pen and pencil illustrations. Frittenden is a village and civil parish in the Tunbridge Wells District of Kent, England. The parish is located on the flood plain of one of the tributaries of the River Medway, 15 miles (24 km) to the east of Tunbridge Wells: the village is three miles (4.8 km) south of Headcorn. It is in a very rural part of Kent. The parish church is dedicated to St Mary. Roman remains have been found near an old Jutish track which ran through the area, along which pigs were driven into the forest of Andreadsweald. The village itself is named in a charter of 804, and the Anglo Saxon Chronicle of 839 relate that King Ethelwulf of Wessex gave the village land to St Augustines in Canterbury.[citation needed] Lord Thomas Cromwell was given land in the village during the reign of King Henry VII. Frittenden Church underwent extensive renovation in 1848 following a fire in the Church in 1790 when lightning struck the Church steeple. Rumours of the Frittenden Treacle Mines were started by locals in the 1930s at the expense of gullible Londoners who would tour the area in their newly acquired motor cars, eager to visit the source of much of the world's treacle.