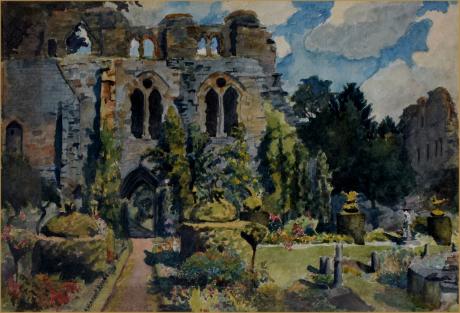 signed " A. Vincent. Reade." and further inscribed and dated on the reverse " Much Wenlock Abbey / Sept 1928 "

The Cluniac priory of Wenlock was dissolved in 1540. In 1545 the priory site and demesne lands were sold to the royal physician Agostino Agostini, who later the same year sold them on to Thomas Lawley (d 1559). He, a local man, moved into the prior's lodgings, which soon came to be considered as Much Wenlock manor house. The property passed through various families until 1858 when it was bought by James Milnes Gaskell. By this time the Abbey (as it is erroneously known) had become a decayed farmhouse, but under Gaskell (d 1873) and his son C G Milnes Gaskell (d 1919) it was restored as what the VCH describe as a 'gentleman's country house' (VCH 1998, 416). The latter's wife, Lady Catherine, an ambitious social hostess who invited guests including Thomas Hardy and Philip Webb to Wenlock, laid out new gardens around it c 1900, at much the same time the surrounding fields being planted with parkland trees. She (d 1935) owned the manor in her own right from 1919. The priory ruins later passed into the guardianship of the Ministry of Works, but the Abbey remains (1998) in private hands.

Wenlock Abbey and the priory ruins (the latter an English Heritage Guardianship site) stand on the east edge of Much Wenlock, a medieval planned town. To the west they are bounded by the churchyard of Holy Trinity, Wenlock's parish church, and to the north by the lane which runs north-east from the bottom of the Bullring. The area here registered is c 3ha.

The priory ruins are entered via a visitor centre, opened in 1998, at the north-east corner of the site. This is approached by the lane off the Bullring. The main, late C19 gates to the Abbey also lie on this lane. A drive leads south from them, before turning east, past the south side of the Refectory, to a gravelled area before the main, south-east front of the Abbey. In the later C20 the everyday approach to the Abbey was via a back drive off Barrow Street.

Wenlock Abbey (listed grade I) is an L-shaped building comprising those parts of Wenlock Priory left upstanding as a private house at the Dissolution. Both ranges are of stone and two storey; one is conventionally interpreted as the monastic infirmary, the other as the prior's lodgings. Over both is a massive stone-tiled roof. The house remains in private ownership. The remainder of the priory ruins (also listed grade I) lie immediately to the north, and are separated from the Abbey by a tall stone wall. Still standing to full height are parts of the transepts of the priory church, massively rebuilt with royal patronage in the early C13. The cloister lies in a conventional position to the south of the nave. Within it are the remains of a lavatorium. It, and Chapter House on the east side of the cloister, are C12 and elaborately carved.

Under Lady Catherine Milnes Gaskell a garden with lawns, topiary, shrubberies and specimen trees was created around the Abbey and amidst the priory ruins, then all one property. Although considerably simplified, much of this garden survives.

The greater part of the courtyard in the south-east angle of the Abbey is filled by a rectangular lawn, around which runs a stone-flagged path with flower beds between it and the Abbey. Against the west end of the Infirmary, and between it and the east end of the Refectory ruins, is a small cobbled courtyard with a circular lily pool. From the courtyard there is a view down the approach drive, until c 70m to the west it tuns north, out of sight. As it leaves the courtyard it runs between to the north the ruins of the Refectory, lawned and the walls planted with climbing shrubs and figs, and to the south the low grass bank beneath the wall of the Bee Garden. This is a 30m square flower garden, quartered and with an Italian capital or well-head at its centre. Elaborate wrought-iron gates of c 1900 give access from the centre of the north and south sides of the garden. A massive, and now irregular, 6m tall yew hedge (early C20 photographs show it to have had clipped domes along its top like the hedge south of the Prior's Lodgings) runs from the north-east corner of the Bee Garden to the south-west side of the courtyard.

An iron gate in the north wall of the Refectory leads to a straight gravel path around the west and north sides of the Cloister. These paths are partly lined with clipped yew bushes, other examples of which lie west of and parallel with the west path. The tall yew hedge west of the latter bushes was planted c 1893 (photographic evidence). South of the Prior's Lodgings is the 50m long Topiary Lawn, defined to the east and west by tall yew hedges. The top of the latter is clipped into domes, that of the former into animals. Across the south end of the lawn is a stone wall. Another lawn runs along the east side of the Prior's Lodgings. Across its north end is a 4m tall stone wall, buttressed and with ball finials. At the east end of the wall is the Gazebo, an octagonal, red sandstone summerhouse of 1900. The main views from this are east, over the park-like valley below the priory. Returning south from the summerhouse is the low, rough stone wall along the east side of the lawn. East of this the ground is lower. First is what in 1998 was an uncultivated compartment, c 30m square and with tall beech hedges (post-1961: photographic evidence) down its north and south sides. East of this is the Stew Pond, a rectangular pool, c 70m long from east to west and 35m wide, and with a narrow island along its centre. A plank bridge gives access to this from the garden. Around the edges of the pool are mature pine trees.

To the south of the uncultivated compartment, and screened by its beech hedge, is a small vegetable garden and orchard.

A belt of mature specimen trees, including coniferous species, runs around the west and north sides of the priory ruins, connecting with the Sycamore Grove, a small block of rough woodland which lies between the eastern half of the back drive and the Bee Garden. Most of the specimen trees were planted c 1900. Sequences of photographs taken during Lady Catherine's lifetime, notably those by Frith & Co, show the creation of the garden in the early 1890s and its gradual maturation. There is no park attached to the house. At much the same time that the topiary gardens were created however the countryside around the Abbey was made more attractive as parkland and specimen trees were planted. On the east side of the Abbey grounds the gardens overlook open countryside, with a view down the shallow valley within which the priory was founded. This is laid to permanent pasture, and contains, as does the large field north of the priory, parkland trees planted c 1900. In the Middle Ages a large pool was created in the valley east of the priory, retained by a contour dam. This survives as a prominent, 300m long linear earthwork. A lime avenue along it was planted c 1900; since that time, if not before, the path along the top of the dam has been known as the Monks' Walk.