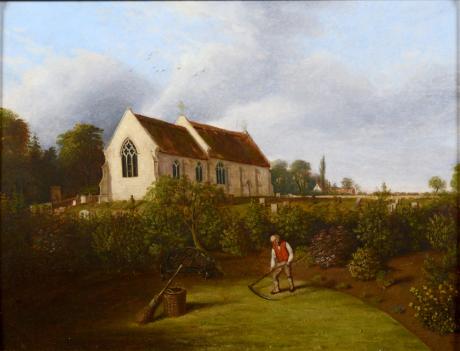 Lawn mowing and ornamental landscaping held no particular interest to 99% of the people who lived during the Georgian era. Cottagers and town dwellers maintained small plots of vegetable gardens and laborers worked in the fields, using scythes to cut wheat and grain for their employers. The garden laborers wielding scythes used a smooth, well-rehearsed motion, they worked in teams to cover large areas of ground. Their labor was cheap and they followed a system that included working in the morning when the ground was still damp. To prepare the lawn for scything, a gardener would: “pole” the lawn first (swishing a long whippy stick across the grass to remove wormcasts) and … roll the ground to firm it and set the blades of grass in a uniform direction.” – Notes and Queries, The Guardian UK. The secret to maintaining a close-cropped lawn was to trim it frequently, about once a week. Lawn edges were best trimmed with sheep shearing clippers. The grass was kept free of daisies with an instrument named a daisy grubber, which is the long-handled instrument with angled pick in the image below. Daisy grubbers are still sold today, as they apparently do the job well. With improvements in gardening equipment, including the invention of the lawn mower in 1830 by Edwin Beard Budding, machines began to take over the hard work of the scythe men.

The word "scythe" derives from Old English siðe. In Middle English and after it was usually spelt sithe or sythe. However, in the 15th century some writers began to use the sc- spelling as they thought (wrongly) the word was related to the Latin scindere (meaning "to cut"). Nevertheless, the sithe spelling lingered and notably appears in Noah Webster's dictionaries. A scythe consists of a shaft about 170 centimetres (67 in) long called a snaith, snath, snathe or sned, traditionally made of wood but now sometimes metal. Simple snaiths are straight with offset handles, others have an "S" curve or are steam bent in three dimensions to place the handles in an ergonomic configuration but close to shaft. The snaith has either one or two short handles at right angles to it, usually one near the upper end and always another roughly in the middle. The handles are usually adjustable to suit the user. A curved, steel blade between 60 to 90 centimetres (24 to 35 in) long is mounted at the lower end at 90°, or less, to the snaith. Scythes almost always have the blade projecting from the left side of the snaith when in use, with the edge towards the mower; left-handed scythes are made but cannot be used together with right-handed scythes as the left-handed mower would be mowing in the opposite direction and could not mow in a team.

The use of a scythe is traditionally called mowing, now often scything to distinguish it from machine mowing. The mower holds the top handle in the left hand and the central one in the right, with the arms straight, the blade parallel and very close to the ground and the uncut grass to the right. The body is then twisted to the right, the blade hooks the grass and is swung steadily to the left in a long arc ending in front of the mower and depositing the cut grass neatly to the left. The mower takes a small step forward and repeats the motion, proceeding with a steady rhythm, stopping at frequent intervals to hone the blade. The correct technique has a slicing action on the grass, cutting a narrow strip with each stroke, leaving a uniform stubble on the ground and forming a regular windrow on the left.

The mower moves along the mowing-edge with the uncut grass to the right and the cut grass laid in a neat row to the left, on the previously mown land. Each strip of ground mown by a scythe is called a swathe (pronounced /swe?ð/: rhymes with "bathe") or swath (/sw??/: rhymes with "Goth"). Mowing may be done by a team of mowers, usually starting at the edges of a meadow then proceeding clockwise and finishing in the middle. Mowing grass is easier when it is damp, and so hay-making traditionally began at dawn and often stopped early, the heat of the day being spent raking and carting the hay cut on previous days or peening the blades.

Scythes are designed for different tasks. A long, thin blade 90 to 100 centimetres (35 to 39 in) is most efficient for mowing grass or wheat, while a shorter, more robust scythe 60 to 70 centimetres (24 to 28 in) is more appropriate for clearing weeds, cutting reed or sedge and can be used with the blade under water for clearing ditches and waterways. Skilled mowers using traditional long-bladed scythes honed very sharp were used to maintain short lawn grass until the invention of the lawnmower. Many cultures have used a variety of 'cradles' to catch cut different kinds of grain stems, keeping the seed heads aligned and laying them down in an orderly fashion to make them easier to sheaf and winnow.

Mowing with a scythe is a skilled task made to look easy by experienced mowers but needs time to learn the skill. Long-bladed traditional scythes, typically around 90 centimetres (35 in) (such as in the example below) and suitable for mowing grass or wheat are harder to use at first, consequently, beginners usually start on shorter blades, say 70 centimetres (28 in) or less. Common beginner's errors include: setting up the snaith with the handles in the wrong locations to suit the body, setting the blade at the wrong turn-in and turn-up angles to suit the conditions, choosing a blade that is too long for the skill level, failing to start with a sharp edge and persevering with a dull one during use, chopping or hacking at the grass, trying to cut too wide a strip of grass at once and striking the ground with the blade. Traditionally, beginners relied on mentors to help them set up and maintain their scythe and to teach them to mow comfortably and efficiently.

Initially used mostly for mowing hay, it had replaced the sickle for reaping crops by the 16th century as the scythe was better ergonomically and consequently more efficient. In about 1800 the grain cradle, was sometimes added to the standard scythe when mowing grain; the cradle was an addition of light wooden fingers above the scythe blade which kept the grain stems aligned and the heads together to make the collection and threshing easier. In the developed world the scythe has largely been replaced by the motorised lawn mower and combine harvester. However, the scythe remained in common use for many years after the introduction of machines because a side-mounted finger-bar mower, whether horse or tractor drawn, could not mow in front of itself and scythes were still needed to open up a meadow by clearing the first swathe to give the mechanical mower room to start.