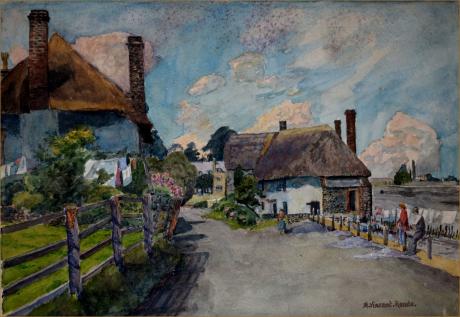 Turkey island is depicted to the right of the painting, it is not known why the island is named Turkey.

Porlock Weir, about 1.5 miles west of the inland village of Porlock, Somerset, England, is a small settlement around a harbour. Porlock means place of the port and Porlock Weir is its harbour. Weir refers to salmon stakes and traps that were situated along the shore. It is a popular visitor attraction.

Many cottages date from the 17th century, including the Gibraltar Cottages which have been designated by English Heritage as a grade II listed building. Like most ports in West Somerset, the harbour is tidal and is home to a small flotilla of yachts and is visited by many more in spring and summer. The port has existed for more than a thousand years. The Anglo-Saxon Chronicle reports that in 1052 Harold Godwinson came from Ireland with nine ships and plundered the area and before that in 866 AD it was raided by Danes. In the 18th and 19th centuries coal from South Wales was the main cargo and in World War II pit props cut in local forests were the return cargo.

The ketch, Lizzy, was wrecked at Gore Point, near Porlock Weir. The ship, built in Appledore, was spotted in trouble off Lynmouth in a storm in 1854. The ship had lost her masts, and was in very bad condition. A fishing boat was sent out to rescue the crew, as Lynmouth possessed no lifeboat. The boat reached the stricken ketch, rescued the crew and returned to Lynmouth safely. The weather improved, and a fresh crew, with the vessel's skipper attempted to salvage her. They improvised with a scrap of sail, and managed to get safely around Foreland Point. They sailed on all night, only just managing to keep the ship afloat. When they reached Gore Point, a mile from Porlock Weir, the ketch sank in shallow water. The wreck lies submerged off the point.

On 12 January 1899, in a storm, the ten-ton Lynmouth lifeboat was launched, but because of the ferocity of the storm could not put out to sea, and was hauled by men and 20 horses over Countisbury and Porlock Hills to Porlock Weir where the water was less rough.Thirteen seamen were rescued. The South West Coast Path and other trails link to Porlock Ridge and Saltmarsh and Culbone, the smallest parish church in England.

Dennis Corner records that Porlock may have originated c.AD700 or later and was the subject of two Viking invasions; on the second occasion in 1052, Harold, son of Godwin and his brother raised a small army and sailed into Porlock Bay with nine ships and landed between Porlock and Porlock Weir. He and his men reached Porlock, burnt every building and carried off what spoil they could. Thirty thanes and many other people were slain. This may, therefore, suggest that the church is no earlier than this date.
At Domesday, Porlock is listed as having six villeins, three bordars and six slaves, suggesting no more than c.100 people lived here. Doverhay was within Luccombe parish before 1930 and had two villeins and one bordar. The boundary between the two settlements was marked by a small stream which runs from, and to, the main Hawkcombe Stream.
On Shrove Tuesday, 1900 a fire destroyed an area of Doverhay, starting in a property opposite the old Wesleyan chapel.[2]

Porlock is the largest settlement between Minehead some six miles to the east and Lynton, about fifteen miles to the west. The present village was originally an important port and harbour dating from at least Saxon times. The name suggests “an enclosed port,” but the sea has since retreated. Nevertheless, the Domesday record indicates that at “Portloc,” there was a “Kings’ House,” the property of Algar, son of Leofric the Earl of Mercia, but that it was taken from him and given to Baldwin Redvers of Exeter as over-lord and Rogo, son of Nigel. It is thought that the latter gave the hereditary name to the Roges family, who held the Manor until the time of Edward III in the 14th century. The franchise for a market was granted by Edward to Sir Nigel Loring, but came to an end when the Manor fell into the hands of the Crown. In 1613-14, James I granted a new charter to Mr. Edward Rogers, Lord, authorised to hold a market every Thursday. Some sources indicate that Porlock once had a Market House “something like that at Dunster” and a Market Cross, but these appear to have been demolished c.1800.
The manor had changed hands a number of times. In the 15th century it belonged to the Harringtons, the Pophams during the 16th and 17th centuries, and Rogers, Winters and Blathwayts from the 17th century onwards. The eastern part of the present village formed part of the separate manor of Doverhay, recorded in Domesday as “Doveri.” At an uncertain date this became absorbed into the parish of Luccombe, providing the latter with a tongue of land projecting northwards to the sea. In 1930, Doverhay was transferred from Luccombe to Porlock. There was a third manor, Sparkhayes, consisting of land between the town and beach and a few scattered houses. It appears that no date is given for its establishment. This may indicate it was formed as a result of land claimed from the sea. It too is now part of Porlock parish.
Porlock was also a centre for the production of yarn of exceptional quality in the 17th and 18th century by hand spinners called “factors” before mechanical methods prevailed elsewhere. Other local industries have included herring fisheries. A customs report of 1682 refers to Porlock as “a place of trade where great quantities of herrings are taken and cured which begets a great concourse of people and small craft that may be (of) dangerous consequence to the Customs unless well-guarded.” This suggests that contraband activities flourished and the guide mentions that “quite a number of hiding places for smuggled goods have been found in old houses and the fields around.”
Although the leather industry is thought to have had much earlier origins, the former tannery, whose buildings survive, was founded in the mid 19th century. Oak-bark tanned leather was produced in quantity, although the trade began to decline after the 1914-18 war. Also considered of local importance is that a pocket of land owned by Court Farm led to some of the finest quality barley, that for several years in the 1930s won top international awards. At the present time a local firm of tea and coffee merchants operate from mainly 19th century buildings within the conservation area.
Porlock has a long history, and was clearly a significant Saxon settlement and port. It was marauded by Danish raiders in 866 and again, the exact date is of some doubt, in 914 or 918. On the latter occasion the raiders were successfully repelled and retreated to Steep Holm where many are said to have faced starvation. Its destruction by Harold, (later King Harold of the Battle of Hastings) in 1052 occurred when he defeated an army from Somerset and Devon. The battle occurred because Algar, brother of Hereward the Wake and son of Leofric, Earl of Mercia was Lord of the Manor and opposed Godwin, Harold’s father who held manors inland, including Dulverton. Some sources suggest that in Saxon times Porlock had a royal palace or hunting lodge and an extensive chase, the former supposed to have been where Court Farm now stands.
Some sources refer to there being a seat of Saxon kings, and wolves as well as deer were hunted. The Saxon Chronicle records that there were Danish raids along the coast in AD 845 and 918 On the latter date, the Sidwiccas invaded from Brittany and laid waste much of the area. Other raids occurred in AD 988 and 997. The dedication of the parish church to St. Dubricius who was Bishop of Llandaff in the 6th century, indicates that he sent Celtic evangelists to found a church here.
In spite of such antiquity, more recent settlement does not clearly indicate the characteristic medieval pattern of narrow burgage plots extending back from the main frontages. However, the Tithe Map of c.1840 does show several such long field boundaries both to the north and south of High Street to the west of the Parish Church. This map and the First Edition Ordnance Survey Map of c.1870 indicates that a number of earlier buildings were demolished in the later 19th century, for example, in what is now the churchyard, and along the north side of High Street. The Tithe Map Apportionment gives some idea of the social and commercial facilities at that time. It records the following: a Rectorial Manor, a Charity School Room, a Poor House, Market House, Malt House, a Chantry, a Chapel, the Parish Pound, and the following inns; The Ship, Rose & Crown, Castle, Three Horseshoes, and Somerset.