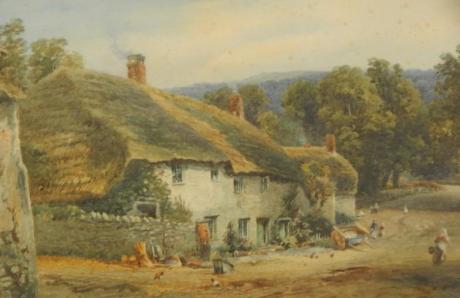 Gittisham is a village and civil parish in Devon near Honiton. The village is 3 miles from Ottery St Mary and it has a church called St Michael. The parish is surrounded, clockwise from the north, by the parishes of Awliscombe, Honiton, Sidmouth, Ottery St Mary, Feniton and Buckerell. Gittisham’s history is an ancient one. Some properties in the parish can be traced back to the Domesday Book, and our Bronze Age ancestors also left their mark on Gittisham Hill where you will find several burial mounds.

Successive landowners have shaped the identity of the parish. They left behind various styles of architecture, including the Elizabethan Combe House, the 17th-century Town Farmhouse, the rendered cob and stone cottages that line the central street and the elegant 18th-century brick houses rising from the east end of the village. The majority of the buildings in the village are listed, and almost the whole village has been designated a conservation area.

The Grade I-listed St Michael’s church is described by Devon historian W G Hoskins as ‘exceptionally attractive.’ Built in the early English and Perpendicular style of architecture, it has many points of interest, including box pews, a wagon roof and some 16th-century glass. Inside you will find several fine monuments to the families who have owned the land around Gittisham. Henry Beaumont, whose family inherited the Combe estate in 1453, is remembered with an effigy in alabaster, Purbeck stone and black marble. Not long after his death in 1591 the estate was sold to the Putt family, and remained in their name for more than 200 years. One of their number, Tom Putt, is said to have lent his name to an old variety of apple.

Memorials to members of the Marker family can also be found in the church. Owners of the Combe estate since 1846, much of the land in the parish is in the hands of Richard Marker, who until recently owned most of the properties in the village as well.The village has maintained a diverse mix of people employed by the estate, as well as retirees, craftspeople, agricultural workers and families. In the early 1980s an area of agricultural land to the east of the parish at its border with Honiton was developed into residential properties, marketed under the brand of Gittisham Vale. This area is home to a large number of retired and semi-retired people, as well as a handful of families with children. A few years ago, a collaboration between the East Devon Area of Outstanding Natural Beauty and the Devon Record Office, with the support of  East Devon District Council and Natural England, produced digital copies of the 1840 tithe maps of the area.  Gittisham’s map can be found at http://www.eastdevonaonb.org.uk/dro/gittisham_tithe.html. It is a fascinating document containing all the old field names and a lot of detail.  Alongside this, the tithe apportionment document lists the owners and tenants of all the properties and fields within the map.

This can be seen at http://www.eastdevonaonb.org.uk/uploads/documents/ourwork/apportionment/Gittisham%20Tithe%20Apportionment.pdf

Alfred Leyman was born September 27th 1856 in Exeter, the only son of John Francis, an artist and later a photographer, and Mary Ann Leyman. He spent much of his early life in Exeter which is where he later met, and married his wife Kate Gauntlett in 1887. Mr Leyman moved to Honiton in about 1888 and went on to become a teacher of art at Allhallows School, Honiton in 1893, a position he held until his death. Leyman did not nationally exhibit his work but did show his paintings locally, at the Annual Devon and Exeter Exhibition held at Elands Art Gallery in 1906 he displayed 16 of his pictures. He concentrated on land and seascapes but was known to have drafted portraits as well as many other scenes from Devonian life as well as a few rare examples of scenery from Dorset and Somerset. He and his wife Kate had one child called Mary who was born in Honiton in 1887. Leyman died in Honiton in 1933 aged 76.