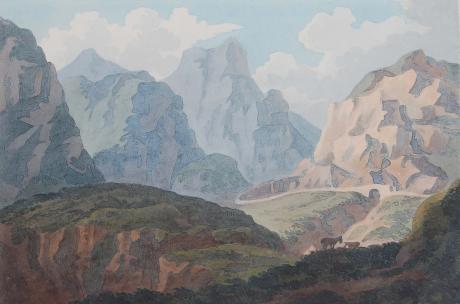 inscribed on the mount " Glen Coe"

Glen Coe (Scottish Gaelic: Gleann Comhann) is a glen in the Highlands of Scotland. It lies in the southern part of the Lochaber committee area of Highland Council, and was formerly part of the county of Argyll. It is often considered one of the most spectacular and beautiful places in Scotland, and is a part of the designated National Scenic Area of Ben Nevis and Glen Coe. The narrow glen shows a dramatically grim grandeur. The glen, approaching from the east on the main A82 road, is surrounded by wild and precipitous mountains. Further west at Invercoe, the landscape has a softer beauty before the main entrance to the glen. The main settlement is the village of Glencoe.

The name Glen Coe is often said to mean "Glen of Weeping", perhaps with some reference to the infamous Massacre of Glencoe which took place there in 1692. However, 'Gleann Comhann' does not translate as 'Glen of Weeping'. In fact the Glen is named for the River Coe which runs through it, and bore this name long prior to the 1692 incident. The name of the river itself is believed to predate the Gaelic language and its meaning is not known. One possibility is that it was named for a tribe once living in the area; however this remains speculation. It is also possible that the name stems from an individual personal name, Chomain or Comhan.

The glen is U-shaped, formed by an ice age glacier, about 16 km (10 miles) long with the floor of the glen being less than 700 m (0.4 miles) wide, narrowing sharply at the Pass of Glen Coe about half way along.The entrance to the glen from above is on Rannoch Moor to the east, below the mountain of Meall a' Bhuiridh; Glen Etive runs to the south from nearby. The entrance to Glen Coe is marked by Buachaille Etive Mor, "the great herdsman of Etive" at the 'junction' with Glen Etive. Glen Coe then runs roughly west for about 12 km (7.5 miles) before turning north-west towards Loch Leven. The south side of the glen is marked by a succession of distinct peaks: Buachaille Etive Mor is followed to the west by Buachaille Etive Beag, then by the Three Sisters, shoulders of the Bidean nam Bian massif which itself marks the western end of the glen. By contrast the north side of the glen is a stark wall of mountain, the Aonach Eagach ridge. The "Aggy Ridge" is crossed at the eastern end by the Devil's Staircase, an old military road opposite Buachaille Etive Mor. The western end terminates with the conical Pap of Glencoe, above Glencoe village, at the point where the glen opens out to Loch Leven.

The River Coe itself - Ossian's "dark Cona" - rises at the north-eastern base of Buachaille Etive Beag and flows west along the glen, with dramatic waterfalls at the Pass of Glen Coe. It then runs through the small Loch Achtriochtan before it turns north west. It then passes through Glencoe village shortly before flowing into the sea loch of Loch Leven (a salt-water arm of Loch Linnhe) at Invercoe. In the glen to the east of Buachaille Etive Beag, the River Coupall runs north to the head of the glen, but it swings east round the Buachaille Etive Mor to join the River Etive running south. Geologically-speaking, Glen Coe is the remains of an ancient supervolcano that erupted with a force of VEI-8. This happened about 420 million years ago during the Silurian period, and the volcano has long since gone extinct.

View from the summit of the Devil's Staircase looking south over the east end of Glen Coe, towards Buachaille Etive Mòr with Creise and Meall a' Bhuiridh beyond.Glen Coe was originally part of the lands of Clan Donald, though since the ending of the clan structure they progressively sold off their estates. Most of the Glen is now owned by the National Trust for Scotland whose visitor centre has displays about both the natural and historical significance of the glen. The land was purchased by mountaineer and philanthropist Percy Unna, who then gave it to the trust on condition that it maintained the wild nature of the land. The building of a visitor centre caused some controversy, as some felt this to be a contravention of Unna's "rules". The original centre was later closed, and a new one built further down the glen. The last area of Glen Coe to be owned by the MacDonalds was the area around Invercoe. In 1894 Donald Alexander Smith, 1st Baron Strathcona and Mount Royal purchased this area and built a stately mansion, Mount Royal. In 2002 Alistair MacDonald of Glencoe made a successful eleventh-hour bid, and purchased the remaining lands of Lord Strathcona from his descendants. Alistair received unsecured loans from just six donors, and immediately set up the Glencoe Heritage Trust, a non-profit-making charitable trust, to secure the heritage of Glen Coe.

Glen Coe is a very popular tourist destination; partly because of its scenic qualities and historical associations, partly because it is on the main road north (the A82), and also because of its attraction for walkers and climbers. It is famous for the quality, and variety of its winter climbing, most of its routes being comparatively easy of access from the main road. Many walkers come to Glen Coe on the West Highland Way following the old military "Wade road" over Rannoch Moor which crosses the River Etive at the Kings House Hotel. From there it is about 2 km (1.2 miles) to the head of the glen, then about 2 km into the glen the Way ascends the Devil's Staircase, a steep, boulder-strewn "cut" (352 m high) which is part of the old military road and drove road north across the hills to Kinlochleven. For hillwalkers there are several good routes on the Bidean nam Bian (1150 m) massif which forms a complex Y-shaped hill with several lesser tops, including Stob Coire Sgreamhach (1072 m) which also has Munro status. One attractive way in to these tops ascends from the Pass of Glen Coe up along the Lost Valley to the ridge. Both Buachaille Etive Beag (958 m) and Buachaille Etive Mor (1022 m) also offer opportunities to hillwalkers.

The north-east face of Buachaille Etive MòrRock climbers concentrate on the Buachaille Etive Mor (1018 m), often called simply "The Beuckle", and on the various routes on the Three Sisters (shoulders of Bidean nam Bian). For adventurous experienced walkers, the finest mainland scramble in the UK is the Aonach Eagach. This extended scramble boasts two of Scotland's trickiest Munro hills, Sgor nam Fiannaidh (996 m) and Meall Dearg (951 m). The Aonach Eagach ridge terminates at the Pap of Glencoe (741 m). The Glencoe ski centre, also known as the White Corries, is actually on the hill of Meall a' Bhuiridh (1108 m) which lies on the east side of Glen Etive, outside Glen Coe proper. This centre is popular with locals but is used mostly by nearby Glaswegians. It forms part of the "Black Mount" estate, which is based on Loch Tulla which is to the South East. Other points of interest include The Study at the Pass of Glen Coe; the cave of Ossian, where tradition says that he was born. The Iona cross was erected in 1883 by a Macdonald in memory of his clansmen who perished in the massacre of 1692. There is car parking at the scenic waterfalls in the Pass of Glen Coe, which was used as the location for "The Bridge of Death" and "The Gorge of Eternal Peril" in filming Monty Python and the Holy Grail, attracting Monty Python pilgrims. Sets for the third Harry Potter film, Harry Potter and the Prisoner of Azkaban, were built near to the bottom of Clachaig Gully, north of the Clachaig Inn. There is a folk museum in Glencoe village.