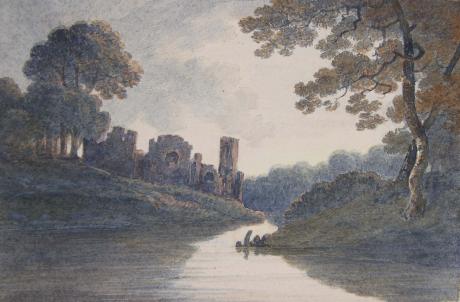 Goodrich stands majestically on a wooded hill commanding the passage of the River Wye into the picturesque valley of Symonds Yat. The castle was begun in the late 11th century, by the English thegn Godric who gave it his name. Standing high on a rock outcrop above the River Wye, Goodrich Castle is one of the region's most striking ruins. The original 'Godric's Castle' was established in 1095 by Godric Marplestone who held the manor at the time of the Domesday Survey of 1086. The present castle however dates mainly from the 12th and 13th centuries. The small Norman keep to the south of the entrance gate was built in stone in the 1130s, erected during the 'anarchy' of King Stephen's reign by Gilbert de Clare within whose lands Goodrich then lay. The castle passed to William Marshal, 'the Elder,' 1st Earl of Pembroke, in 1204 as a consequence of his loyal support for the unpopular King John. It was under William's fourth son Walter, 5th Earl of Pembroke, that the surrounding outer stone walls and turrets (pictured here) were completed between 1220 and 1245.

Following the childless death of Walter in 1245, Goodrich passed to the Crown and thence, by marriage, to William de Valence, Henry III's half-brother. A major programme of strengthening now began which included the construction of the entrance barbican. William was a stout supporter of the king during the building troubles between Henry and his English barons. In fact, as a result of pressure from his fellow barons, William was twice banished by the king, in 1258 and 1264. Nevertheless, following the fall of the baron's cause after the defeat of their leader Simon de Montfort in 1265, William returned to Goodrich and continued to expand the castle's defenses. Goodrich became an important link in the chain of castles surrounding Wales during Edward I's campaigns against the principality. With its strong walls and rock foundations, the castle was almost impregnable. Adding to the castle's importance was its strategic value, positioned high above the River Wye dominating the ancient fording point at 'Goodrich Boat.'

In the early 14th century, following the death of William de Valence's son Aymer, Goodrich was held briefly by Hugh le Despencer, a powerful ally of the beleaguered king, Edward II. However, following the removal of Edward by Roger Mortimer in 1326, the hated Despencer was executed and the castle returned to a de Valence heir, Richard Talbot. The Talbots, a Shropshire family, moved their local seat from Eccleswall Castle, near Weston-under-Penyard, and remained in possession of Goodrich for several centuries.

The Talbots grew wealthy during the 14th century on ransoms gained fighting in France. Some of this wealth was directed towards improvements to their castle at Goodrich which included, in 1346, the foundation of the nearby Augustinian Priory of Flanesford. Today the priory still lies below the castle walls, on the banks of the Wye, and has recently been restored for use as holiday accommodation. In 1442 the Talbots were created Earls of Shrewsbury thanks to their success during the 'Hundred Years War' with France. During the Wars of the Roses in the mid 15th century, the Talbots temporarily lost possession of Goodrich to the Herberts of Raglan, a result of the Talbots support for the Lancastrian cause. The Talbots were later returned to their holdings but, following their elevation to the Earldom of Shrewsbury, the family moved away, neglecting their castle at Goodrich.

Goodrich saw little action through the remainder of the Middle Ages, however, the outbreak of Civil War in England and Wales during 1642 changed all this. During the first year of the war Goodrich was initially held for Parliament by the Earl of Stamford. The Earl was nevertheless soon obliged to withdraw owing to his isolated position within the predominantly Royalist Welsh March. Goodrich was then occupied for the king by Sir Henry Lingen until 1646. It was in the opening weeks of 1646 that the well known Parliamentary commander, Colonel John Birch, turned his attention to Goodrich. Knowing the castle's formidable strength, Birch set in for a long siege. Four and a half months later Birch's siege was finally successful when the famous mortar 'Roaring Meg' was used by his Parliamentary forces to breach the castle walls resulting in the fall of the garrison and Goodrich's capture. The mortar, which was designed to fire 200 lb projectiles, can now be seen in the Churchill Gardens Museum in Hereford. Ironically the mortar was cast at the nearby Goodrich Furnace, established in 1575, by the Earl of Shrewsbury, at that time the owner of the castle.

There is a sad foot note to this final act. The castle is believed to be haunted by the spirits of two lovers, Alice Birch, Colonel Birch's niece, and Charles Clifford, the son of a local Royalist commander. Both Alice and Charles were caught in the castle when the siege began and while fleeing from the besieging forces they were drowned in the nearby River Wye as they tried to cross the swollen river by the ford at 'Goodrich Boat' . During stormy nights it is said that the ghostly figures of the couple can still be seen attempting to complete their tragic crossing.

Today Goodrich is in the care of English Heritage and is open to he public throughout the year. Although a ruin, it remains in excellent condition and is a fine example of its type.