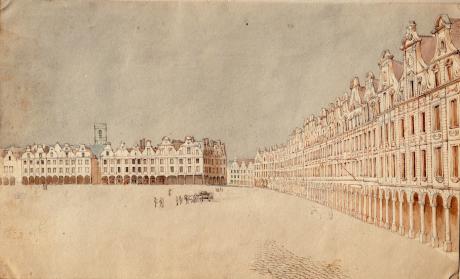 Arras is the capitalof the Pas-de-Calais department, which is half of Nord-Pas-de-Calais, France’s fourth most populous region. It is located in Northern France on the Scarpe river. The Arras plain lies on a large chalk plateau bordered on the north by the Marqueffles fault, on the southwest by the Artois and Ternois hills, and on the south by the slopes of Beaufort-Blavincourt. On the east it is connected to the Scarpe valley.

Established during the Iron Age by the Gauls, the town of Arras was first known as Nemetocenna, which is believed to have originated from the Celtic word nemeton, meaning 'sacred space'. The first mention of the name Arras appeared in the 12th century. Some hypothesize it is a contraction of Atrebates, a Belgic tribe of Gaul and Britain that used to inhabit the area. The name Atrebates could have successively evolved to become Atrades, Atradis, Aras and finally Arras. Others believe it comes from the Celtic word Ar, meaning 'running water', as the Scarpe river flows through Arras. The city of Arras is well known for its architecture, culture, and history. It was once part of the Spanish Netherlands, a portion of the Low Countries controlled by Spain from 1556 to 1714.

In the 4th century, Nemetecacum was renowned for its arts and crafts as well as textiles trade throughout the whole empire. Between 406 and 407, the city was taken and destroyed by Germanic invaders. In 428, the Salian Franks led by Clodion le Chevelu took control of the region including the current Somme department. Roman General Aetius then chose to negotiate for peace and concluded a treaty (fœdus) with Clodion that gave the Franks the status of «foederati» fighting for Rome.

The town's people were converted to Christianity in the late 4th century by Saint Inoccent, who was killed in 410 during a barbarian attack on the town. In 499, after the conversion of Clovis I to Catholicism, a diocese (évêché in French) was created in Arras, the Roman Catholic Diocese of Arras, and given to Saint Vaast (also known as Saint Vedast in English), who remains the diocesan patron saint. Saint Vaast then established an episcopal see and a monastic community. It was suppressed in 580 to found the Roman Catholic Diocese of Cambrai, from which it would reemerge five centuries later.

The town was granted a commercial charter by the French crown in 1180 and became an internationally important location for banking and trade. The wool industry of Arras, established in the 4th century, became of great importance during the Middle Ages. Already in the third century Romans had lauded about the quality of wool from Tournai and Arras. By the eleventh century Arras was the leading city and trading hub of the wool industry. This prominence would eventually shift towards areas north of Arras, and cities such as Lille, Douai and Saint-Omer, followed by Ypres and eventually Bruges would become the centres of the wool industry and trade. However, by the 14th century Arras still was renowned and drew considerable wealth from the cloth and wool industry, and was particularly well known for its production of fine tapestries—so much so that in English and Italian the word Arras (Arazzi in Italian) was adopted to refer to tapestries in general. The patronage of wealthy cloth merchants ensured that the town became an important cultural center, with major figures such as the poet Jean Bodel and the trouvère Adam de la Halle making their homes in Arras.

During most of the First World War, Arras was about 10 kilometers (6.2 miles) away from the front line, and a series of battles were fought around the city and nearby at the Vimy Ridge.

On 31 August 1914, German light cavalry (Uhlans) arrived in Tilloy-lès-Mofflaines, and an army patrol made a foray into Arras. On 6 September 1914, 3,000 soldiers led by General Hans-Jürgen von Arnim barracked within the city and in the Arras citadel. Shortly after, Louis Ernest de Maud'huy's soldiers partly repelled the German army troops, and trenches were dug in the Faubourgs d'Arras. On 7 October 1914, the Arras city hall burned. On 21 October 1914, the belfry was destroyed, and so was the Arras Cathedral on 6 July 1915.

In 1917, a series of medieval tunnels beneath the city, linked and greatly expanded by the New Zealand Tunnelling Company, became a decisive factor in the British forces holding the city.

By the end of World War I, the city was so heavily damaged that three quarters had to be rebuilt. The reconstruction was extremely costly, yet it proved to be a success and allowed the city to expand.