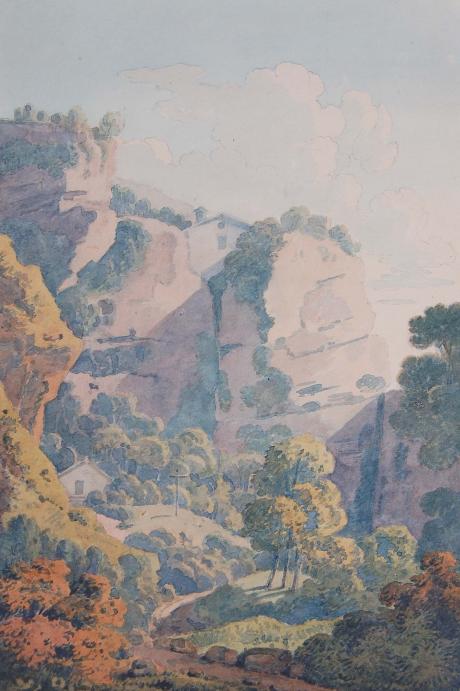 This hermitage is surrounded on all sides by steep and dreadful precipices, some of which lead the eyes straight down, even to the river Lobregate; it can be entered only on the east side by a draw-bridge, which, when lifted up, renders any access to it almost impossible. This hermitage was formerly a strong castle, and possessed by a banditti, who frequently plundered and ravaged the country in the day-time, and secured themselves from punishment, by retiring to this fast hold by night. As it stands, or rather hangs over the buildings and convent below, they would frequently lower baskets by cords, and demand provisions, wine, or whatever necessaries or luxuries the convent afforded; and if their demands were not instantly complied with, they tumbled down rocks of an immense size, which frequently damaged the buildings, and killed the people beneath: indeed, it was always in their power to destroy the whole building, and suffer none to live there; but that would have been depriving themselves of one safe means of subsistence:—­at length the monks, by the assistance of good glasses, and a constant attention to the motion of their troublesome boarders, having observed that the greater part were gone out upon the marauding party, persuaded seven or eight stout farmers to believe, that heaven would reward them if they could scale the horrid precipices, and by surprise seize the castle, and secure the few who remained in it;—­and these brave men accordingly got into it unobserved, killed one of the men, and secured the others for a public example. The castle was then demolished, and a hermitage called St. Dimas, or the Good Thief, built upon the spot. The views from it are very extensive and noble to the south and eastward.

At the beginning of the nineteenth century, during the Peninsular War of France against Spain, the hermits were dispersed or killed and the hermitages burned or destroyed, as was the monastery. Subsequently, eremitical life was very sporadic. It was not until the 1960's that Father Estanislau resumed the tradition; later, when he went to Japan, Father Basili continued the tradition up to the recent present. At the moment there is no hermit on Montserrat and with the exception of the hermitages of Santa Creu and Sant Dimas, all the hermitages are completely in ruins or in a very bad state. Some have been partly reconstructed by vagabonds and transients who spend a while there, but not as anything we would consider eremitical life.

In Christian tradition, Saint Dismas (sometimes spelled Dysmas or only Dimas, or even Dumas), also known as the Good Thief or the Penitent Thief, is the "good thief" described in the Gospel of Luke. This unnamed thief, crucified alongside Jesus, repents of his sins, and asks Jesus to remember him in his kingdom. The name Dismas for this thief dates back to the 12th century, and various traditions have assigned him other names.