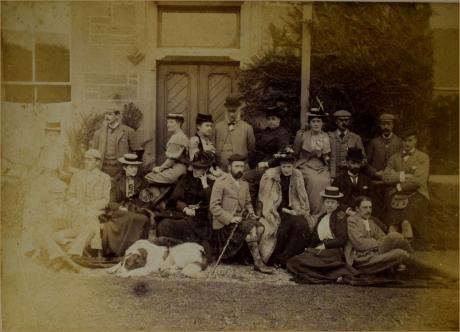 Lindertis lies approximately 3.5 miles west of Kirriemuir on the A926 road to Alyth, on the north side of this road. On the final approach to the entrance to the estate along the A926, the road is lined on both sides by ancient Spanish Oak trees.

A house has existed on the site since the 16th century. The recent house was built in 1814 and the west wing added in 1864. However, nothing remains of the 1814 house and the later west wing, having been demolished in stages after WWII. The roof of the main house was removed in 1947 leaving the west wing still standing and inhabited by estate workers. The final demolition was in 1987. Quantities of the stones remain where the house once stood.

There were four drives to the house and these are still seen as tracks. For the four driveways, there were three lodges, all still in use. Two of these lodges also lie on the A926.

An ice house is shown on the OS maps and is reputed still to exist in reasonable condition. Similarly, a pond is shown on the maps at the rear of the property and is known as the washing pond.

The formal grounds, policies and gardens are now overgrown. The walled garden which stands within sight of the road, is falling into disrepair. To one side of the walled garden is a family graveyard.