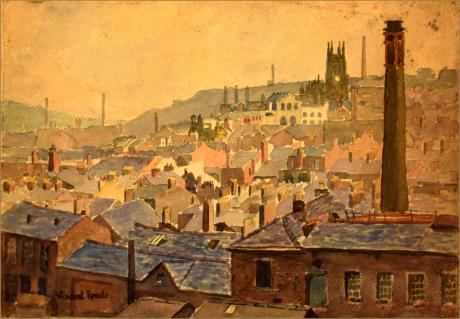 Heaton Norris is a suburb in the Metropolitan Borough of Stockport, Greater Manchester, England. It is part of the Four Heatons, and neighbours Heaton Chapel, Heaton Mersey and Heaton Moor. Formerly a parish of Lancashire, in 1835 part of Heaton Norris was annexed to Stockport in Cheshire; Heaton Chapel and Heaton Moor remained in Lancashire, but further territory was ceded in 1894 and the remnant in 1913. Historically part of Lancashire, Heaton Norris was part of the Manchester barony of the Grelley family, but between 1162 and 1180 it belonged to William le Norreys.

In the early 13th century, Heaton Norris, a sub manor of Manchester, encompassed all of the Four Heatons. It was escheated (i.e. reverted) to the manor of Manchester around 1280. In 1322, there were 32 dwellings suggesting a population of 150, the ten freeholders of the escheated manor had the right to graze on common pasture and to cut wood. There was no chapel of ease, unlike neighbouring St Ostwalds at Didsbury, and didn't get one until St Thomas' was built in 1758.

The township remained part of the parish of Manchester in the Salford Hundred of Lancashire until 1835 when the southern portion of the parish was absorbed into Stockport. In 1894, under the Local Government Act 1894, it was divided again, with a portion becoming part of Stockport county borough in Cheshire, and the remaining part forming the Heaton Norris urban district in Lancashire. A further 16 acres (65,000 m2) transferred in 1901,[4] and the remainder, Heaton Moor and Heaton Chapel, was added to Stockport county borough in 1913. There was a plebiscite in the 1930 on whether the area wished to become part of Manchester again, but the vote was lost. In 1901, the population was recorded as 26,251. Since 1974 it has formed part of the Metropolitan Borough of Stockport in Greater Manchester.

Weaving was first recorded in 1580 and by 1776 farms were being advertised as having cowsheds and large loom houses. In spite of the industrial developments nearby in Stockport and Manchester, most of Heaton Norris remained agricultural, though in 1836 there were 20 mills employing upwards of 5,000. The rural nature changed with the arrival of the railway station at Heaton Norris in 1840 and Heaton Chapel in 1852, when the area became largely residential in order to house workers in local mills. The majority of Heaton Norris is characterised by deck-access or high-rise estates (such as Lancashire Hill) and Victorian terraced housing.

Heaton Norris, Heaton Mersey, Heaton Moor and Heaton Chapel are on the north bank of the River Mersey, and south of the Cringle Brook, to the west of Reddish and the River Tame. The land slopes gently towards the north from a high point in the south above a steep descent to the Mersey. Most of the townships are between 60 m and 70 m above sea level, and 30 m to 60 m above the river. Heaton Norris is about 7 km south of St Ann's Square, Manchester. The soil is clay on marl and red sandstone.

The former Manchester to Buxton Roman road and the later turnpike, now the A6, pass through Heaton Norris, as does the London to Manchester railway. This is carried from Edgeley to Heaton Norris by the massive brick-built Stockport Viaduct.

Along the north bank of the River Mersey ran the Great Central Railway's line from Warrington to Stockport (1852). Today this route is used by the M60 motorway; Junction 1 (formerly Junction 12 of the M63) serves Heaton Norris.

The Stockport branch of the Ashton Canal terminated at Heaton Norris. In 1820, William Nelstrop established his flour mill on Lancashire Hill. Nelstrop's Albion Flour Mills were rebuilt on the same site in 1893 following a fire. The company is now one of Britain's largest independent flour millers.

Whether it be the image of the dark satanic mills with chimneys spewing smoke across the skyline or royalty wearing hats produced in our town, industry has provided many of Stockport's highs and lows and earned its place on the North West stage. And cotton, silk and hats were the building blocks on which the town developed. The early roots of Stockport's industrial heritage can be found in the cloth and wool merchants who were operating in the borough in the 15 th century. Woollens and linens were being produced in large quantities by the 16 th century and famous names came to the fore during this period.

The Elcock family rose to prominence in the first half of the 16 th century and provided eight Stockport mayors in 13 years. The trade had spread from London, and Chester became the major centre in the North West. But by 1750, with Chester in decline, Stockport had expanded and become one of the major centres in the country. The origins of Stockport's silk industry can be traced back to the local manufacture of buttons and weaving of silk lace in the 17 th century. By the 18 th century the manufacture of yarn was dominating the economic life of the town. Yarn was produced for the local button trade and London, the country's main silk weaving centre.

Mills of varying sizes were springing up across Stockport and the River Mersey was utilised as a new source of power. Large mills, such as Carrs Mill, Park Mill and Adlington Square Mill, became the major employers of the town. By 1769 nearly 2,000 people were employed in the town's silk trade and over half of these were in the large mills. But by 1772 the country's silk industry was in depression and several companies were declared bankrupt. The workforce of the four large mills fell to less than 200.

This was the catalyst for mill owners to find a new trade - cotton.The large mills were sold off and converted for cotton spinning. Fifty years of silk making had provided Stockport with a body of skilled workmen and the design of the water-powered mills allowed for an easy changeover. New machinery, such as the fly-shuttle and spinning jenny, helped the cotton trade take off. And one firm which took full advantage was that owned by the Marsland family. Henry Marsland began his textiles career in 1770, but his site at Bullock Smithy did not have water power and his business did not grow until he leased Park Mill. From there his firm grew to be one of the largest textile businesses in the region.

But, as with most large industries, the history of the mills featured tragedies. The worst disaster was in 1851 when a boiler explosion at Park Mills claimed the lives of 22 men.Reports at the time said the boiler exploded and was hurled through the air before embedding itself in the wall of a nearby building, starting a fire. And just a year earlier 15 men had died after a building collapse at Brinksway Mill. Hatting was introduced into Stockport from the 1650s with manufacture carried out in domestic workshops by felt makers using tools and processes which would still be recognisable 200 years later. Some hats were sold to the local market, but the skills of the workforce soon came to the attention of major hatting firms in London, in particular Christys, who began to commission work from factories in the town. The firm first moved into the town in 1826 when it took over a mill owned by the Worsley family. The Worsleys had been producing hats exclusively for Christys since the 1780s.

But by 1840 felt hat making in Stockport was on the verge of collapse. Hatters were put onto shop time and workers were said to be suffering 'great distress and destitution'. A saviour was at hand in the shape of William Barber, who learned silk hat making skills and invented new machinery to turn the Christy factory around. In fact, employment in Stockport's hat factories increased dramatically from 473 in 1860 to 4,737 in 1890. Stockport was now at the centre of the country's hatting industry which by 1884 was exporting more than six million hats a year. But the sudden expansion in the industry thanks to new technology had slowed dramatically by the 1890s and the 'hey-day' was over. By the 1920s and 1930s working patterns in Stockport were beginning to fluctuate with a new age engineering industries taking over.

But by now Stockport was established. The industrial revolution may have drawn unfavourable comments about our town being 'one of the darkest and smokiest holes in the whole of the industrial area', but the smoke spewing chimneys had generated investment into Stockport.