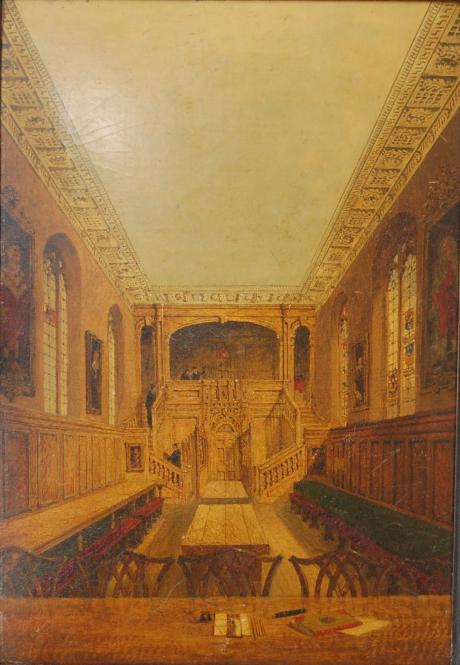 Magdalene College is a constituent college of the University of Cambridge, England. The college was founded in 1428 as a Benedictine hostel, in time coming to be known as Buckingham College, before being refounded in 1542 as the College of St Mary Magdalene. Magdalene College has some of the grandest benefactors including Britain's premier noble the Duke of Norfolk, the Duke of Buckingham and Lord Chief Justice Christopher Wray. However the refoundation was largely the work of Thomas Audley, Lord Chancellor under Henry VIII. Audley also gave the college its motto—garde ta foy (Old French: "keep your faith"). Audley's successors in the Mastership and as benefactors of the College were, however, prone to dire ends; several benefactors were arraigned at various stages on charges of high treason and executed.

The college's most famous alumnus is Samuel Pepys, whose papers and books were donated to the college upon his death, and are now housed in the Pepys Building. The college boasts a portrait of the famous diarist by Peter Lely, which hangs in the Hall.

Magdalene is noted for its 'traditional' style: it boasts a well-regarded candlelit formal hall (held every evening) and was the last all-male college in Oxford or Cambridge to admit women in 1988 (Oriel College was the last in Oxford, admitting women in 1985). This change resulted in protests by some male undergraduates, including the wearing of black armbands and flying the college flag at half-mast.

Magdalene's old buildings are representative of the college's ramshackle growth from a monks' foundation into a centre of education. It is also distinctive in that most of the old buildings are in brick rather than stone (save for the frontage of the Pepys Building). Magdalene Street divides the most ancient courts from more recent developments. One of the accommodation blocks in the newer part of the college was built by Edwin Lutyens in the early 1930s. Opened in 2005, Cripps Court, on Chesterton Road, features new undergraduate rooms and conference facilities.

Magdalene remains, despite this 20th-century expansion, one of the smaller colleges within the University, numbering some 300 undergraduates and an expanding postgraduate community.

The hall dates from 1519 but was greatly altered in 1714, when the walls were rewainscotted and the original timber roof concealed by a plaster ceiling; the gallery, with its double staircase, was constructed, incorporating a good deal of earlier woodwork, and over the dais was painted a remarkable group of heraldic 'achievements' which, having become almost invisible, were brought vividly to life again by a very careful process of cleaning in 1949.

Joseph Murray Ince was born in 1806 (some say in London) and he spent his childhood in Presteigne in Radnorshire. Ince was certain of his career and as a career choice took immediately to painting. Joseph Murray Ince was born in London in April 1806 and christened Josef-Marie Ince. His father was Dr Henry Robert Ince, who came from a family of skilled craftsmen, though he trained as a doctor and worked as a military surgeon; while his mother was Anne-Elisabeth, daughter of Comte le Jeune, an émigré from Revolutionary Paris. At the time of his birth, the family was living at Upper Grafton Street. Soon after Ince was born, his father was invited by an old friend to set up as a general practitioner in Presteign, Radnorshire, Wales. The family rented Roseland, Broad Street, and Ince attended John Beddoes Free Grammar School. During his childhood, he befriended John Scarlett Davis of Leominster who, like him, shared his passions for  fishing and painting and would develop as an artist.

From 1823 to 1826 he was a pupil under the painter David Cox. In 1826 he moved and exhibited at the Royal Academy. Later he was chosen at the British Institution opr at other galleries. In 1826, Ince moved to London and lived at 31 King’s Street, off the Edgware Road, possibly lodging with his uncle, Charles Ince, a former cabinet-maker. Almost immediately, he became an occasional exhibitor at the Royal Academy of Arts (1826-47) and the British Institution, and a frequent exhibitor at the Society of British Artists (showing 138 works in its Suffolk Street galleries between 1826 and 1858). Early exhibits included south-coast seascapes (from 1828) and views of Stockholm (from 1829), as well as scenes of Herefordshire and Radnorshire, suggesting that he had opportunities to travel. Ince decided to build on some good sales and a developing reputation by publishing a set of seven lithographs, which appeared in 1832 as Views Illustrating the County of Radnor. The original paintings on which these were based appeared among his exhibits at the Society of British Artists in 1833.

On 12 June 1834, Ince married Sarah Phillips (the daughter of a Presteign painter and decorator) at St Mary’s Church, Marylebone, the parish in which he was residing. They celebrated their marriage with a honeymoon-cum-sketching trip that seems to have taken in Devon, Bristol, Oxford and Cambridge, as well as a visit home to Presteign. When Sarah became pregnant in the autumn, they travelled back to Presteign but, unfortunately, both she and their premature son died the following summer. From that time, and for more than a decade, Ince shared his time between London and Presteign, while travelling widely. His London addresses were 48 George Street, near Portman Square – until 1841 – and then 9 George Street. He visited Oxford (1836), Wales (1839-40), possibly Holland and Germany (1839-40) and certainly Cambridgem (1842-43). The Cambridge Portfolio, edited by the Reverend J J Smith, and published in parts between 1838 and 1840, included illustrations by Ince,probably based on drawings he had made during his first visit to the town.

In 1832 he made many architectural drawings and views of the colleges in Oxford and Cambridge. Ince was a drawing master at Cambridge University in the 1830s. Ince married in 1834 but lost his wife in childbirth. About 1835 he returned to Presteign, where he spent the majority of his time, but he had to keep contact with his customers as well in London. He had inherited some property from his parents which supplemented the good income that he made from his painting. He painted many maritime and rural scenes including harvesting and woodcutting showing contemporary people and their animals.

On the death of his father in 1849, Ince became executor of his estate, and organised the sale of the contents of Roseland (including a number of significant paintings by John Crome and other artists). He also became legal guardian of his young half-brother, Edward Ince Young. On leaving Presteign, Ince seems to have travelled in Italy and Spain (again suggested by exhibited paintings). He then took up residence at 12 King’s Parade, Cambridge, while retaining an address in London. He would die at his London home on 24 September 1859. His work is represented in numerous public collections including the British Museum and the V&A; and The Fitzwilliam Museum (Cambridge).

Ince died on 24 September 1859, and was buried in Kensal Green cemetery, London. Ince was a good painter of landscape in water-colours. There are examples of his drawings at the South Kensington Museum, and in the print room at the British Museum. He has a blue plaque on his former house in Powys and a monument was erected to his memory at Presteigne.