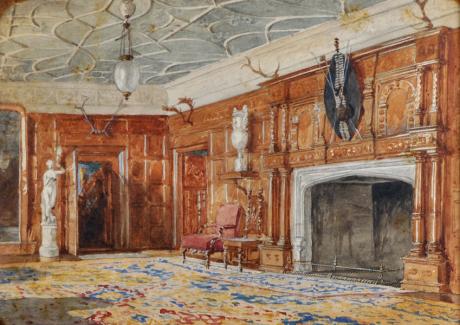 The house faces south overlooking an expanse of lawns. Part of the few acres that have been retained from the large estate in which it once stood. Forde House, now also known as Old Forde House, is a Grade I listed Jacobean former manor house in Newton Abbot, Devon, England. It was built in c.?1610 and is noted for its fine 17th-century wood-carving and plasterwork. Once the manor house of the parish of Wolborough, it is now absorbed into a suburb of Newton Abbot. The south front is clearly visible from the busy Brunel Road which cuts across the house's front lawn.

Forde House is named after a ford in the Aller Brook which carried the road to Shaldon, St Marychurch and Aller, and lies within the ancient parish of Wolborough. Prior to the dissolution of the monasteries, Wolborough belonged to Torre Abbey and it is probable that Forde had been one of the Abbey's large granges which paid it tithes on its produce.

John Gaverock had been the Abbot's steward and for his services had received an annual salary of £3.00. Torre Abbey was dissolved in 1539, during the reign of Henry VIII, and soon after, in 1545, the King sold the manor of Wolborough to Gaverock and his wife for the sum of £592 14s 2d. When Gaverock became lord of the manor he set about building himself a new manorial home at Forde. The origin of the older building at the rear of the present Forde House is obscure, but it is probable that it is the house erected by John Gaverock after he acquired the manor in 1545.

John Gaverock's three daughters inherited Forde House and, towards the close of the sixteenth century, sold it to Richard Reynell of the Middle Temple, an eminent lawyer and officer in the Court of the Exchequer, a son of Richard Reynell, the lord of the adjoining manor of East Ogwell. He married Lucy Brandon whose father was sometime Chamberlain of the City of London. Soon after Richard and Lucy Reynell had acquired the manor they set about building themselves a fine new house at Forde.

The present house bears the date 1610 and is built in the shape of the letter E, commonly thought to be in honour of Queen Elizabeth 1, who had just died. It is, architecturally, a plain, substantial structure built of roughcasted stone in the Elizabethan style. The grounds once included a deer park which was later to disappear beneath the inroads of the railway; the area of Newton Abbot now known as Decoy did in fact include a decoy for trapping wildfowl. The present house was built by Sir Richard Reynell (d.1633), Member of Parliament for Mitchell in Cornwall (1593) and his wife Lucy Brandon and was probably completed in about 1610, according to the date on the rainwater heads. The house was built with an E-shaped floor plan, which may have been in honour of Queen Elizabeth I, who had recently died. The grounds were originally extensive, and included the whole of what is called Decoy (so named, because wildfowl were decoyed there to extend the house's larder), as well as a deer park.

On 15 September 1625 King Charles I stayed at the house overnight on his way to Plymouth,to inspect the fleet. He returned a few days later and stayed for a further two nights.

During the Civil War, Forde House gave shelter to Oliver Cromwell and Colonel Fairfax on 24 January 1646 before the second Siege of Exeter.

The facade of Forde House is some 100 feet in length and has two gabled wings and another gabled projection, narrower, but carried up to the same height, which forms the entrance porch. the most striking external feature is the two ranges of square-headed windows, seven of the upper and six of the lower range. These windows are all uniform size and design, each being partitioned by mullions divided midway by a transom, all of massive stone.

The main features of interest inside the house are the finely carved panelling, the oaken staircase and the massive oak doors and, above all, the magnificent ceilings. All the front rooms, including the porch, have finely decorated plaster ceilings, with much renaissance ornament on them, the lower ones flat and the upper ones coved. Several of them are extremely beautiful. Perhaps the most chaste of all is the one in the dining room, where broad interlacing bands of leaf ornament enclose square and diamond shaped forms to cover the entire surface and frieze thirty inches in depth is studded with oblong panels within scalloped plate borders.

The arms of the Reynell family were formerly displayed above the entrance porch and can yet be seen in stained glass in the hall, together with those of later occupiers, Waller and Courtenay. In the drawing room, the arch above the southern window contains the sculptured arms of Reynell impaling Brandon, thus giving equal honour to both their families.

In 1622 Richard Reynell of Forde was knighted by James 1. In that year too a marriage was arranged between Sir William Waller, a man with a military reputation, and Jane, only daughter of Sir Richard and Lady Reynell; the marriage took place at Wolborough Church. Sir Richard died in 1634 at the age of 76 and is buried in the magnificent monument in the chancel at Wolborough Church together with Lady Lucy, who died in 1652, aged 74.

Lady Reynell was described by a nephew as 'religious and virtuous' and proof of this is the Widow's Almshouses which survive to this day in Newton Abbot and were founded by her as a refuge for four clergymen's widows. The conditions for a tenancy in these almshouses were laid down by their pious founder as follows:

King Charles I visited Forde House in 1625, the year of his accession to the throne, on his way to Plymouth to inspect the fleet. The King's retinue began with Villiers, Duke of Buckingham and four other peers and ended with a jester. The King stayed overnight and enjoyed dinner which was probably laid in the hall. This was followed by a court which the King held in the dining room, where he knighted the host's nephews, Richard Reynell of West Ogwell and Mr Thomas Reynell, his brother, the Kings's own server; and also Mr John Yonge, eldest son of the diarist Walter Yonge.

The King returned to Forde some eight days later to stay for two nights. On both occasions the King slept in the first floor rooms adjoining the drawing room which was probably the Reynells' own bedroom. A list of the food supplied for the King's second visit was kept and reads as follows:

In 1646 Sir Thomas Fairfax, accompanied by his lieutenant-general, Oliver Cromwell, stayed at Forde House on their way to capture Dartmouth. Lady Reynell was approaching 70 years of age; we may surmise that the Parliamentarians were somewhat unwelcome guests at Forde, which twenty years previously had entertained a King. Lady Lucy was a churchwoman, in contrast to her son-in-law Sir William Waller who favoured the Presbyterians and sided with the cause of Parliament; he soon became a major-general and was successful in several important actions. Relations between mother and son-in-law at this time must have been somewhat strained.

William of Orange stayed at the house in 1688 on the way to his coronation in London, having landed in Brixham a few days earlier. The Courtenays soon moved back to a restored Powderham Castle, where in particular William Courtenay, 1st Viscount Courtenay (1711-1762), the great-grandson of Margaret Waller, effected a major remodelling. Forde House however remained a possession of the Courtenays until 1762 when the house was let to a succession of occupiers.

It was in the year 1688 that William, Prince of Orange sailed from the Hague and landed at Brixham to lead his army to the capital. Two days after his arrival the Prince reached Newton Abbot. It was market day and the Prince's intention to become King of England was proclaimed for the first time, and the populace was addressed from St. Leonard's Tower in Wolborough Street, where the bells were afterwards rung in celebration.

Prince William proceeded to Forde House where he found that Sir William Courtenay was 'not at home'. Although the cautious Sir William had left instructions to his staff to provide food and accommodation for the Prince, he had decided not to welcome him personally. He supported the Prince's mission but reasoned that if he should fail, he should not find himself in a compromising position. Prince William stayed overnight at Forde House in the first floor room known ever since as the Orange Room.

During his stay the Prince's forces were stationed on nearby Milber Down and Aller Brake. His army numbered in all about 30,000 men and included cavalrymen in full armour and many foreign contingents, such as negroes, Finlanders and Swiss.

Margaret Lady Courtenay died in 1692 some four years after this last distinguished visitor and Sir William Courtenay in 1702. Both are buried at Wolborough where, however, there is no memorial to them. Forde House continued to be owned and used as a residence by succeeding generations of the Courtenay family until 1762 when the place was let.

In 1820 Forde House was let to Ayshford Wise (1786-1847), JP, DL and MP for Totnes 1812-1818, descended from the ancient Devon family of Wise of Sydenham House. His co-member for Totnes was Thomas Courtenay (d.1841), younger brother of William Courtenay, 10th Earl of Devon (1777–1859), of Powderham. The Wise family were lord of the manor of Little Totnes, and his father John Wise (1751-1807) of Wonwell was Recorder of Totnes from 1779 until his death and a partner in the "Totnes Bank", founded in about 1800 as Wise, Baker & Co. In 1817 the bank opened a new branch in Newton Abbot and in 1820 Ayshford Wise sold Wonwell and rented Forde House to be near his new premises. Later in the 1820s he sold his ancestral lands in Totnes to Edward Adolphus St Maur, 11th Duke of Somerset (1775–1855), of Stover House, who owned a great estate in and around Totnes the caput of which was Berry Pomeroy Castle. The bank failed in 1841.

In 1860 Forde House was let to Mr. J.W.Watts who held the office of High Sheriff of Devon in 1890 and died in 1904. The Courtenay family sold the house in 1936 to Stephen Simpson, who sold it two years later to a Mrs M. Sellick who ran a business from it. In the 1950s she negotiated to convey the property to the National Trust, but the transaction was not completed. when it became the base for an antique business and was thus used until 1978 when it was acquired by Teignbridge District Council who have undertaken the restoration of this famous house, and all its historic connections."

The main hall of the house is traditionally located to the west of the main entrance and has a notable plaster ceiling depicting sprays of several different flowers and fruits.The dining room, which was formerly the library, has a similarly-decorated ceiling, as does the Chairman's parlour, which also has a fine fireplace. The Long Room, also known as the Great Chamber, is on the first floor and is one of the best great chambers surviving in south west England.

Today, the house lies to the east side of the town of Newton Abbot, near the Penn Inn roundabout at the junction of the A380 and the A381 roads. Its former large grounds have been reduced to a grassed area between the house and the busy Brunel Road.