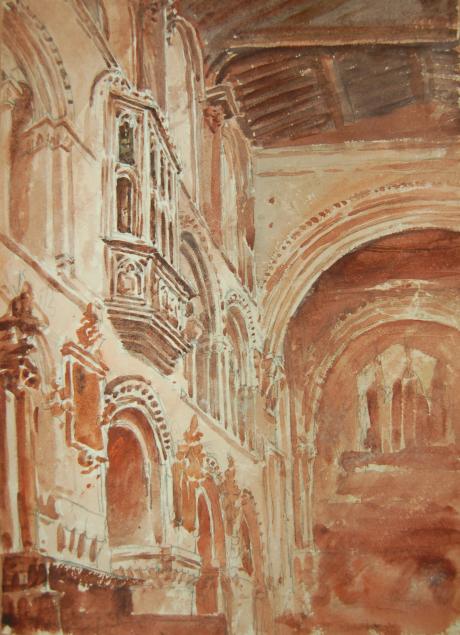 on the reverse "St Bartholomew / London"

The Priory Church of St Bartholomew the Great, sometimes abbreviated to Great St Bart's, is an Anglican church in West Smithfield within the City of London. The building was originally founded as an Augustinian priory in 1123 and adjoins St Bartholomew's Hospital of the same foundation. Founded in 1123 by Rahere, a prebendary of St Paul's Cathedral and an Augustinian canon regular, its establishment is recorded as being in gratitude for his recovery from fever. His fabled miraculous return to good health contributed to the priory gaining a reputation for curative powers and with sick people filling its aisles, notably on 24 August (St Bartholomew's Day).

The surviving building originally comprised part of a priory adjoining St Bartholomew's Hospital, but while much of the hospital survived the Dissolution of the Monasteries about half of the priory's church was ransacked before being demolished in 1543. Its nave was pulled down up to the last bay but the crossing and choir survive largely intact from the Norman and later Middle Ages, enabling its continued use as a parish church. Part of the main entrance to the church remains at West Smithfield, nowadays most easily recognisable by its half-timbered Tudor frontage, which was erected by the post-Reformation patron of the advowson, Lord Rich, Lord Chancellor of England (1547-51).From there to its west door, the church path leads along roughly where the south aisle of the nave formerly existed. Very little trace of its monastic buildings now survive, although parts of the cloister now house a café. St Bartholomew the Great is so named to distinguish it from its neighbouring smaller church of St Bartholomew the Less which was founded at the same time within the precincts of St Bartholomew's Hospital to serve as the hospital's parish church and occasional place of worship. The two parish churches were reunited in 2012 under one benefice.

Having escaped the Great Fire of London of 1666 the church fell into disrepair, becoming occupied by squatters in the 18th century. W. G. Grace, however, was one famous congregant before its restoration in the late 19th century,when it was rebuilt under Sir Aston Webb's direction. During Canon Edwin Savage's tenure as rector the church was further restored at the cost of more than £60,000. The Lady chapel at the east end had been previously used for commercial purposes and it was there that Benjamin Franklin worked for a year as a journeyman printer. The north transept was also formerly used as a blacksmith's forge in order to make ends meet. The Priory Church was one of the few City churches to escape damage during the Second World War and, in 1941, was where the 11th Duke of Devonshire and the Hon Deborah Mitford were married.

The poet and heritage campaigner Sir John Betjeman kept a flat opposite the churchyard on Cloth Fair. Betjeman considered the church to have the finest surviving Norman interior in London. In 2005 a memorial service was held for Sir William Wallace, on the 700th anniversary of the Scottish hero's execution, organised by the historian David R. Ross. Charitable distributions in the churchyard on Good Friday continue. A centuries-old tradition established when twenty-one sixpences were placed upon the gravestone of a woman stipulating that the bequest fund an annual distribution to twenty one widows in perpetuity, with freshly-baked hot cross buns nowadays being given not only to widows but others. The church was designated a Grade I listed building on 4 January 1950. In April 2007 it became the first Anglican parish church to charge an entrance fee to tourists not attending worship. The oriel window was installed inside St Bartholomew the Great in the early 16th century by Prior William Bolton,allegedly so that he could keep an eye on the monks. The symbol in the centre panel is a crossbow "bolt" passing through a "tun" (or barrel), a rebus or pun on the name of the prior.

William Camden wrote: “It may be doubtful whether Bolton, Prior of St Bartholomew, in Smithfield, was wiser when he invented for his name a bird-bolt through his Tun, or when he built him a house upon Harrow Hill, for fear of an inundation after a great conjunction of planets in the watery triplicity".

The church served as the chapel of the Imperial Society of Knights Bachelor before the establishment of the society's permanent chapel in St Paul's Cathedral in 2005.