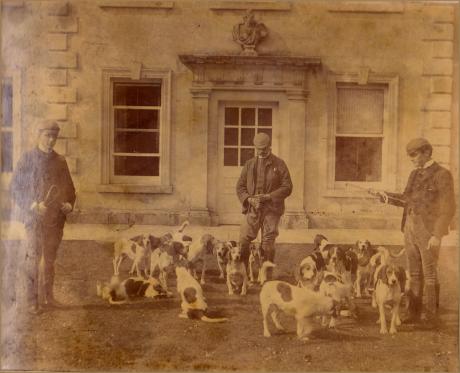 Creech Grange is an elegant country house in Steeple, south of Wareham in Dorset at the foot of the Purbeck Hills. Historic England designate it as a Grade I listed building. The park and gardens are Grade II* listed in the National Register of Historic Parks and Gardens.

The house was built by Sir Oliver Lawrence (1507–1559), who acquired the land from the former Bindon Abbey, near Wool, after Henry VIII had abolished the monasteries in 1539. Lawrence was the brother-in-law of Henry's Lord Chancellor, Thomas Wriothesley, 1st Earl of Southampton. Lawrence was an ancestor of the first American president, George Washington, and the joint arms of the two families - the famous stars and stripes of Washington's signet ring and the American flag - appear in memorials at Steeple and Affpuddle.

Creech Grange was sold to Nathaniel Bond in 1691, and the family still hold their Purbeck estates. It was Thomas Bond who in Stuart times laid out the famous London Street over fields of swamp and refuse tips and lost a fortune. Only fragments remain of the original house built by Lawrence before his death in 1559, partly because it was damaged by fire by the Parliamentarians during the English Civil War, and finally because in 1846 the entire front was taken down and rebuilt in the local Tudor style.

In 1746, Denis Bond erected a folly known as Grange Arch on the highest local point on the Purbeck Ridge, Ridgeway Hill (199 m). The folly is now owned by the National Trust. Creech Grange is not to be confused with neighbouring East Creech Manor that was in the possession of Walter Le Franke in 1224 and passed down through his family to Mary Franke in 1637, who married Edmund Hayter (d. 1657), and was sold out of that family in 1770.

There are panoramic views from nearby Creech Barrow Hill. Though part of the Purbeck Hills, Creech Barrow stands out, detached. The church tower of Lady St Mary in the old town of Wareham stands proud. Poole Harbour assumes dominance as the view moves north-easterly, its southern shore dominated by the deep green of Rempstone Forest. After the blur of the Poole/Bournemouth conurbation, the ruins of Corfe Castle conclude the sweep as the eastern view disappears into the Purbeck Ridge.