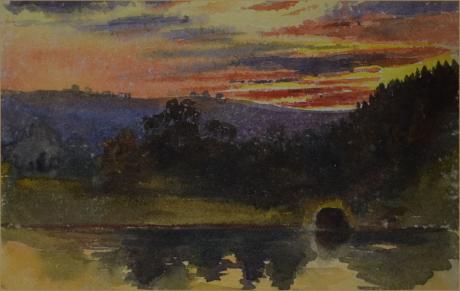 pencil and watercolour
12 x 17.50 cm.
Enquire about this item

Clapham is a village in the civil parish of Clapham cum Newby in the Craven district of North Yorkshire, England. It was previously in the West Riding of Yorkshire. It lies within the Yorkshire Dales National Park, 6 miles (10 km) north-west of Settle, and just off the A65 road. The church of St James in Clapham was founded in Norman times, and originally dedicated to St Michael. It is mentioned in records dating back to 1160. The village and church were burned during a Scottish raid following the Battle of Bannockburn in the early 14th century. The church tower was probably erected following this incident, but the rest of the church dates from the 19th century.

In the 14th century John de Clapham, who took his surname from the village, was a supporter of the Earl of Warwick and lived at Clapdale Castle. His descendants took part in the Wars of the Roses on the side of the House of Lancaster. Since the 18th century Clapham has been home to the Farrer family who established their Ingleborough estate. The family owns, and is responsible for, much of the land, walls, woods, fields and moors of the village, surrounding countryside and farms. Electricity has been generated on the Ingleborough estate since 1893. There is an operating water turbine-powered generator at the top of the village next to the waterfall. It was installed in 1948. Originally it supplied the church, Ingleborough Hall, Home Farm and 13 street lights. There is another turbine in the sawmill which is in use although it is now helped by an electric motor when the larger saw is in use. In August 1947 the Trow Ghyll skeleton was discovered in a cave above the village.

Clapham is situated at the base of Ingleborough mountain, one of Yorkshire's "Three Peaks" - Ingleborough, Whernside and Pen-y-ghent, and is a starting point for its ascent. Running through the village is Clapham Beck, fed from Fell Beck which starts on the slopes of Ingleborough and sinks into Gaping Gill, England's highest waterfall, where Fell Beck drops 110 metres vertically into a pothole, and exits via Ingleborough Cave into Clapham Beck. The beck feeds into the River Lune via the River Wenning. The beck is crossed by four bridges in the village (two footbridges: Brokken Bridge and Mafeking Bridge, and two road bridges). Above the village is a man-made lake built and expanded in the 19th century. This provided pressure for the water turbines and the drinking water supply, while the outflow fed an artificial waterfall at the top of the village.

Clapham lies on the Craven Fault zone, a complex geological fault which marks the division of the sandstone rocks of the Bowland area and the limestone of the Ingleborough area. However, the valley of Clapham Beck has cut through the limestone and into the underlying Ordovician basement rocks which produce soils that are acid, not alkaline like those on the limestone. This is beneficial to the many species of rhododendron planted along Clapdale and which would suffer in alkaline soils.

Until the early part of the 19th century the parish of Clapham was the home of yeoman farmers, independent small landowners, many of whom owned or even built their own homes. The community was bound by the customs of the old manorial system. One of these farmers, Richard Farrer, had a grandson James who became an attorney and in 1741 bought Yew Tree Cottage in Clapham.

Over the years they re-modelled the northern (upper) part of the village, moving roads and bringing many improvements to the village. They extended their house to form Clapham Lodge and later generations extended it again to become Ingleborough Hall. The old village green was taken to make room for gardens around the Hall and some houses were demolished to create space for the Hall grounds and for a carriage-drive giving access to the Hall. (Image at top of page is Ingleborough Hall photographed in 1922 by J. A. Farrer).

They increased the size of the lake, built the waterfalls, installed filter beds and provided drinking water piped into the houses as well as using water-power to generate electricity for lighting in some of the main buildings and in the street.

Ingleborough Lake formerly known as The Tarn, showing (left to right) the overflow channel constructed in 1996, Encombe Bridge and the dam/embankment. They helped to rebuild the church in Clapham as well as building one in Keasden. They provided land for the cemetery, land for the sewage farm and built water closets in place of the old earth closets in village houses.

The Farrers also provided the buildings which were converted into the village hall, as well as building new schools in Clapham, Keasden and Newby.

In 1837 the accessible part of Clapham Cave was greatly extended. Many came to see the natural wonders which were revealed. From 1850 many visitors arrived on the new-fangled railway. In Clapham the Bull Inn was re-named The Bull and Cave, while the Cave was re-named Ingleborough Cave.

Clapham became an ‘estate village’ where almost all the residents were tenants, many of whom worked on the estate. The surrounding land became grouse moor and livestock grazing. Extensive woodlands were planted for the timber crop and pheasant rearing. No industry was permitted and arable farming was discouraged.

In the two World Wars several estate workers left to join the Forces and profitable grouse shoots were no longer so common. Two sets of Death Duties close together in the 1940s and 50s added to the strain on estate finances. Ingleborough Hall, after spending the war years as a school for evacuees from the south coast, was sold to the West Riding County Council to house a school for delicate children.

In 1953 a new squire took over, Dr. John Farrer. By hard work, careful management and selling some properties he balanced the books. Many residents were allowed to buy or build their own homes in the village and Clapham ceased to be the estate village it had once been.

The Reginald Farrer Nature Trail to Ingleborough Cave and beyond was opened in 1970 to mark European Conservation Year. The Trail and Cave became evermore popular attractions and hundreds came to enjoy them or to tackle the challenges of the nearby Three Peaks or even the 300 foot drop by bosun’s chair into Gaping Gill’s enormous cavern.

In 1972 Bradford and a consortium of other local authorities changed their use of Ingleborough Hall; it became an outdoor education centre.

More and more people have come to enjoy Clapham’s historic charm and old-world peace. Today, although there still remain three working farms in the village, visitors are one of the principal sources of income.

Clapham has an ancient history and is today the home of many people who love it dearly. Please treat it with the respect and consideration which it deserves.