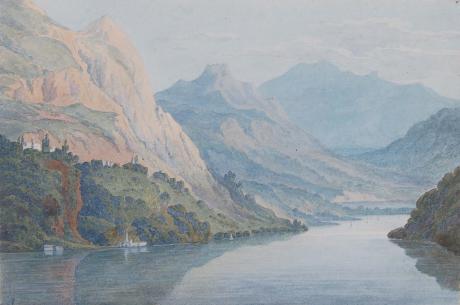 Lake Lugano (Italian: Lago di Lugano or Ceresio) is a glacial lake in the south-east of Switzerland, at the border between Switzerland and Italy. The lake, named after the city of Lugano, is situated between Lake Como and Lago Maggiore. It was cited for the first time by Gregory of Tours with the name Ceresio in 590 AD, a name which is said to have derived from the Latin word cerasus, meaning cherry, and refers to the abundance of cherry trees which at one time adorned the shores of the lake. The lake appears in documents in 804 under the name Laco Luanasco.The lake is 48.7km2 in size, 63% of which is in Switzerland and 37% in Italy, has an average width of roughly a kilometre, a maximum depth of 288m found in the northern basin and bathing in the lake is allowed at any of the 50 or so bathing establishments located along the Swiss shores.The Italian waters of the lake and the exclave of Campione d'Italia are considered by Italian law as non-territorial for fiscal purposes and as such enjoy a special tax status as a duty free area, exemption from EU VAT and offer residents other advantageous tax privileges.

Lake Lugano with the dam of MelideIn 1848, the dam of Melide was built on a moraine between Melide and Bissone. The A2 motorway and the Gotthard railways cross the lake there, linking Lugano to Chiasso. The dam separates the northern (27.5 km²) and southern (21.4 km²) basins. The lake retention time of the northern basin (11.9 years) is considerably higher than the southern one (2.3 years) (8.2 years on average). Well known mountains and tourist destinations on the shores of the lake are Monte Brè (925m) east, Monte San Salvatore (912m) west of Lugano and Monte Generoso (1,701m) on the south-east shore. The World Heritage Site Monte San Giorgio (1,097m) is situated south of the lake. Fishery in the lake (and Lake Maggiore) is regulated by an agreement between Switzerland and Italy of 1986. The current agreement on navigation dates from 1992.

The first certain testimony of a political body governing the shores of the lake is from 818 AD. Occupying an area of strategic importance, the lake was then part of the feudal dominion of the County of Sperio. Around 1000 AD, it came under the control of the Bishop of Como. The region was the site of the war between Como and Milan over control of Alpine traffic from 1218 to 1227. As the lake and its shores became progressively incorporated into the Duchy of Milan they became the subject of political and territorial contention during the 15th century, and Lugano became the lake's main town. The lake definitively ceased to belong to a single sovereign political entity following the establishment of the transalpine bailiwicks of the Swiss cantons at the beginning of the 16th century. The Italian-Swiss border was fixed in 1752 by the Treaty of Varese, and has since remained virtually unchanged.

The lake is full of fish. Apart from a few protected areas, such as the mouth of the River Cuccio in Porlezza, fishing is allowed anywhere, although according to various regulations. Protected species are the bleak and the white clawed crayfish (Austropotamobius pallipes). The bleak is almost extinct here, unlike in Lago Maggiore, and planning is under way for the controlled repopulation of the lake, particularly around Ponte Tresa. In 1895 the brook trout was introduced from Lake Zug, while between 1894 and 1897 the common whitefish was introduced. Since 1950 attempts have been made to introduce the whitefish Coregonus macrophthalmus from Lake Neuchâtel, but it has not established itself effectively. The Common Roach is present in large numbers and took around ten years to colonise the entire lake, thereby replacing the bleak. Still present are the European chub, tench, carp and a few examples of European perch, largemouth bass, zander and burbot. Recently the wels catfish has also been spotted.

The whole area behind the southern shores of Lake Lugano is rich in fossils. The focal point of these fossil deposits is Monte San Giorgio, where since the 1800s many fossils have been found dating from the mid Triassic (around 220 million years ago). The deposits on Monte San Giorgio stretch towards the west into Italian territory and the deposits of Besano. Fossils dating from the early Jurassic (around 180 million years ago) have also been found along the southern shores but more towards the east and Osteno.