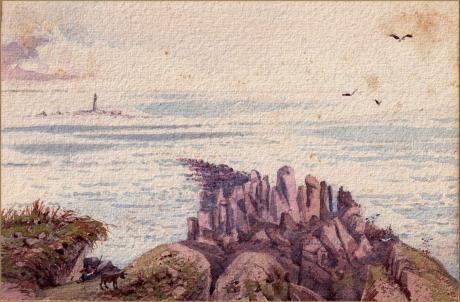 Longships Lighthouse is an active 19th-century lighthouse about 1.25 mi (2.0 km) off the coast of Land's End in Cornwall, England. It is the second lighthouse to be built on Carn Bras, the highest of the Longships islets which rises 39 feet (12 m) above high water level. In 1988 the lighthouse was automated, and the keepers withdrawn. It is now remotely monitored from the Trinity House Operations & Planning Centre in Harwich, Essex.

The original tower was built in 1795 to the design of Trinity House architect Samuel Wyatt. It contained a fixed array of eighteen Argand lamps with reflectors, arranged in two tiers and shining out to sea,probably the first time Argand lamps and reflectors had been installed in an offshore lighthouse.The lantern was 79 feet (24 m) above sea level but very high seas obscured its light.

In 1869 Trinity House began constructing a replacement.The building of the present granite tower used much of the equipment that had previously been used in the construction of the Wolf Rock Lighthouse.It was equipped with a first-order fixed optic built by Dr John Hopkinson of Chance Brothers. The tower was first lit in December 1873, having cost £43,870 to build, and displayed a fixed white light with two red sectors (to warn ships away from the Brisons, to the north-east, and Rundlestone, to the south-east).Initially the new lighthouse was fitted with a fog bell, which sounded two strokes every fifteen seconds;

In 1883 Longstone was altered to show an occulting light (eclipsed for three seconds every minute); an explosive fog signal was introduced at the same time, sounding twice every ten minutes.The bell was retained for use as an alternative signal, put to use if the explosive signal was not working, until 1897 when it was removed. Even after these improvements, however, the S.S. Bluejacket was wrecked on rocks near the lighthouse on a clear night in 1898, nearly demolishing the lighthouse in the process. Often due to bad weather there was a delay in relieving the men and supplying stores. In January 1901 there was some concern that the men had run short of provisions due to the severe weather. It was found that there was plenty of stores and the only hardship was their lack of tobacco. They had taken to smoking coffee, hops and tea leaves instead. The explosive signal was altered to sound twice every five minutes in 1899.

In 1967 the light was electrified: an electric bulb replaced the old paraffin burner, displaying an isophase light visible up to 19 nautical miles (35 km) distant. At the same time, the explosive fog signal was replaced with a more modern 'supertyfon' fog horn. In 1974 a helipad was constructed on top of the lantern, greatly easing access.

In 1988 the lighthouse was automated, the keepers were withdrawn and the fog horn was replaced by a new electric emitter. The light was converted to solar power in 2005 It now flashes twice every ten seconds.

The current lantern emits one long five-second flash every ten seconds. Seaward flashes are white but they become red – due to tinted sectors – for any vessel straying too close to either Cape Cornwall to the north or Gwennap Head to the south-southeast. The white light has a range of 15 nautical miles (28 km; 17 mi), and the red sector light a slightly shorter range of 11 nautical miles (20 km; 13 mi). During poor visibility the fog horn sounds once every ten seconds.