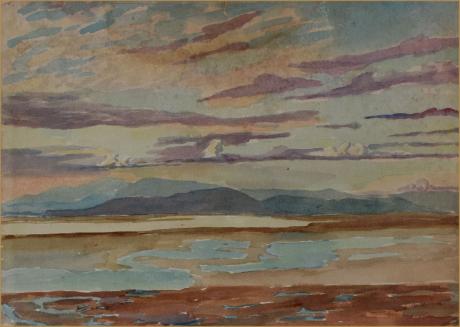 Morecambe Bay is a large estuary in northwest England, just to the south of the Lake District National Park. It is the largest expanse of intertidal mudflats and sand in the United Kingdom, covering a total area of 310 km2 (120 sq mi). In 1974, the second largest gas field in the UK was discovered 25 miles (40 km) west of Blackpool, with original reserves of over 7 trillion cubic feet (tcf) (200 billion cubic metres). At its peak, 15% of Britain's gas supply came from the bay but production is now in decline. It also one of the homes of the high brown fritillary butterfly.

The rivers Leven, Kent, Keer, Lune and Wyre drain into the Bay, with their various estuaries making a number of peninsulas within the bay. Much of the land around the bay is reclaimed, forming salt marshes used in agriculture. Morecambe Bay is also an important wildlife site, with abundant birdlife and varied marine habitats, and there is a bird observatory at Walney Island. The bay has rich cockle beds, which have been fished by locals for generations.

There are seven main islands in the bay, all to the north; Walney, Barrow, Sheep, Piel, Chapel, Foulney and Roa. Walney is substantially larger than the others, with its southern tip marking the north-western corner of the Bay. Sheep, Piel, Chapel and Foulney Islands are tidal and can be walked to at low tide with appropriate care. Local guidance should be sought if walking to Chapel or Piel islands as fast tides and quicksand can be extremely dangerous. Roa Island is linked to the mainland by a causeway, while Barrow Island has been connected to the mainland as part of the docks system at Barrow-in-Furness.

The extensive sandflats are the remains of a vast sandur or outwash plain established by meltwaters as the last ice age waned. Sea-level was still some 3m below present day levels at the start of the Holocene some 11,000 years ago. The Greek geographer and astronomer Claudius Ptolemy (died c170 AD) referred in his writings to Morikambe eischusis as a location on Britain's west coast, lying between the Ribble and the Solway. Sixteenth century scholar William Camden identified the locality as being near Silloth, hence the similar name of that bay but the eighteenth century antiquarian John Horsley who translated Ptolemy into English in 1732 favoured it being the bay on the then Lancashire/Cumberland border. In 1771 historian John Whitaker took up this latter suggestion[5] and the name appeared on maps subsequently. The first recorded to do so being one associated with Father Thomas West's Antiquities of Furness of 1774. Camden believed the name originated with two words meaning crooked sea whilst West offered up white/beautiful haven though current thought is that it refers to a curve of the sea.

There have been royally appointed local guides (holding the post of Queen's Guide to the Sands) for crossing the bay for centuries. This difficulty of crossing the bay added to the isolation of the land to its north which, due to the presence of the mountains of the Lake District, could only be reached by crossing these sands or by ferry, until the Furness Railway was built in 1857. This skirts the edge of the bay, crossing the various estuaries. The London-Glasgow railway also briefly runs alongside the bay - the only place where the West Coast Main Line actually runs alongside the coast.

The bay is notorious for its quicksand and fast moving tides. On the night of 5 February 2004, at least 21 Chinese immigrant cockle pickers drowned after being cut off by the tides.This tragedy led some commentators[who?] to suggest that the cockle beds should be closed until improved safety measures could be introduced. Morecambe Bay is also home to several of the UK's offshore wind farms: West of Duddon Sands, Burbo Bank, Walney, Barrow, and Ormonde.

Some 319,100 people live along the coastline of Morecambe Bay, with many of these people residing in the towns listed in the table below. The largest town in the vicinity of the bay is Barrow-in-Furness located to its west, whilst the town which adopted its name from the bay (Morecambe was previously called Poulton-le-Sands) closely follows. Morecambe relied on the bay for many years, as a popular seaside holiday destination, whilst Barrow still relies on the seas for a large percentage of its economy - ship and submarine construction.